Art at the German Federal Bank

Banks, especially in the German-speaking realm, do hide a lot of secrets, some of them extremely unpleasant and painful. However, the transparency principles are becoming more a rule than an exception in this domain too, therefore the need to open up to the public and even allow the citizens to have a look at the well-kept secrets and mysteries of the financial world.
The German Federal Bank - Deutsche Bundesbank - the main institution in Germany in charge with the monetary policy of the euro system, is one of the last ones to join the popular events of the open house, when the public can for a couple of hours to visit the institution, admire its work and find out about its policies. It might be that it is due to the fact that the current director is a former journalist which is aware of the importance of accountability towards the citizens of the republic. This year, the events organised for a couple of hours at the headquarters in Berlin, in Leibnitzstraße, celebrated also a special anniversary: 60 years since its creation, in charge with a stable currency of one of the most powerful economies of the world. 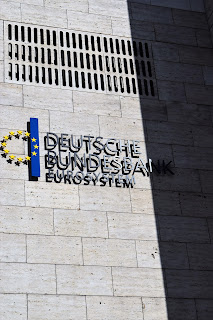 The current headquarters were established at this address ten years ago, in a building that used to be previously used by the Reichsbank Charlottenburg-branch, and later on, by the State Central Bank - Landeszentralbank. Protected as historic monument, it has both elements of classical architecture and of post-war modernism, due to the contribution of the Stuttgart architect  Günter Hermann. 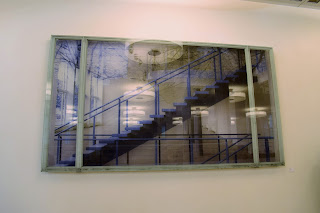 The art collection of the Bundesbank, created in the tradition of the Italian Renaissance, when bankers were also protectors and supporters of the art, started in 1957, with a focus on German artists. In 2008, after the branches from Frankfurt/Oder and Potsdam were merged with the representative office in Berlin, a competition was open to artists to create works that might be part of the daily ambiance of the bank. One of the winners was the Berlin-based Sabine Hornig, which creates interesting art installation which combines photography and architecture or sculptures. The painting in the photography is called Window to Karl-Marx Allee. 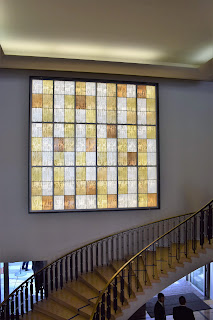 The historical entrance with the huge stained glass frame on the top of the stairs is typical for the institutional buildings of the post-war era in West Germany. It offers a majestic yet strict touch to the building and offers to the visitor and employee the sense of the importance and severity of the things going on behind the closed doors. 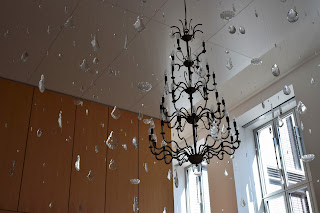 During my short wandering from a place to another, I was quietly observing how much a piece of art ennobles a space. For instance, this ethereal art installation by Albrecht Schäfer, with pieces of crystal falling down from the ceiling of the Conference Hall. You can imagine how easy could be sometime to relieve the weight of the financial policies from your shoulder with only a glimpse of an eye to the ceiling. 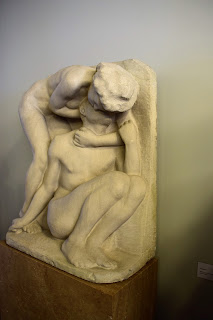 Besides the art of other contemporary German artists, like Annette Kelm or Ulrich Wüst, I spotted in the bank interiors also a classical sculpture by Georg Kolbe, an interesting artist whose works can be extensively admired at the relatively underrated museum in Charlottenburg. 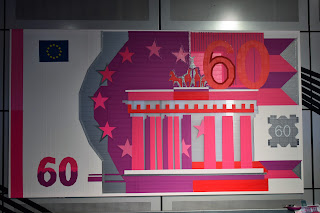 'Cool' art entered the museum realm as well. As probably graffiti is a bit too risky, the organisers of the open house introduced into the program, besides the classical food trucks and personalised gadgets distributed to the visitors, some duck tape workshops. Works celebrating the important milestone in the life of the bank were created on the walls. 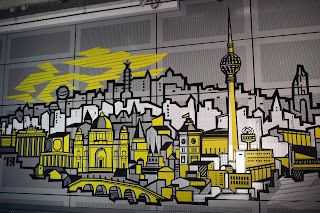 From afar, you can hardly realized in some cases that everything was done with just a modest duck tape. As in many other cases, German institutions are looking courageously into the future, as for now, strong enough to cope with any serious challenge.
Posted by Ilana WD at 11:42 AM