Either you are a visitor or a local, the chance of visiting Moabit more than once every couple of years is very limited if ever. As in the case of many places in the city, you can easily live in your 'hood - aka Kiez, in German - without bothering too much what the other part of the city is doing. However, curious bloggers minds like me, went there quite often, and this was long before I also worked there for a short while. The good news is that this part of the city is developing fast too, many interesting cultural and foodie offers. 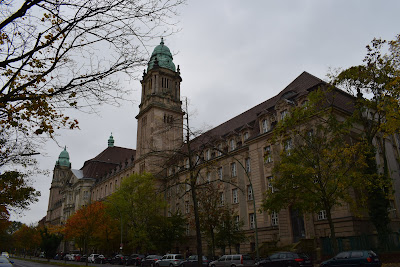 This time, I am back in the area with a special mission: having a look at the 100-year old Kriminalgericht - Criminal Court - a building you can hardly miss, at the end of the multi-cultural Turmstrasse, at no. 91. After the German Chancellor's Office and the Bundesbank, this venerable institution has its own open house day, and I cannot miss such a rare opportunity. 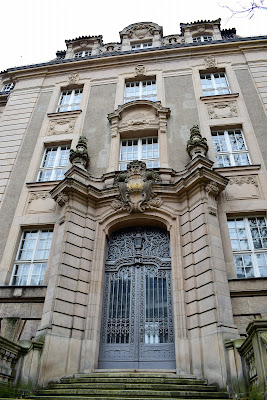 The first impression my first architectural encounter with this building was unforgettable. As I will find out later, the end-19th century Baroque is typical for the court constructions, either in Berlin or in other part of the country, such as Naumburg. The criminal court was inaugurated in 1906, after four years of intensive work, following the plans of the architects Carl Vöhl and Rudolf Mönnich. 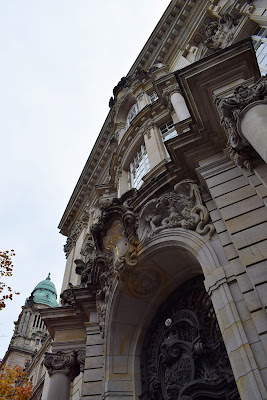 The massive stone decorations are entincing for the eyes, but are also sending a clear message of power and strength. 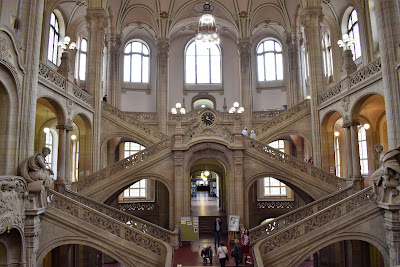 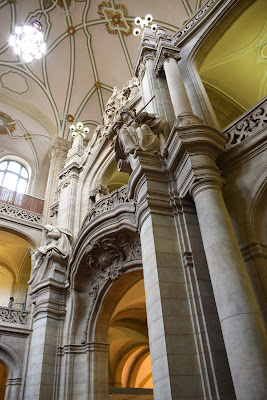 Although the elaborated facade is elaborated enough to foil the curiosity of the architecture lover, nothing prepared me for the impressive main hall. With a high of 29 meters it covers a perimeter of 40x27 meters, enough space to easily host the Brandenburg Gate, with some extra space too.
The hall, with its cathedral-like structure creates an overwhelming impression, particularly if you visit the place searching for justice. Obviously, not only the words to have their own power, but also architecture and symbols, as messengers of clear social and political messages.
On the top of each side arch, there are six massive representation of moral, social values or human inclinations such as: religion, justice, contentiousness (or spirit of dispute, Streitsucht), lie, peace-loving and truth.
The eyes are browsing every single architecture detail - nothing is accidental - going back to the beautiful ensemble, rightfully labelled as Europe's most beautiful criminal court. 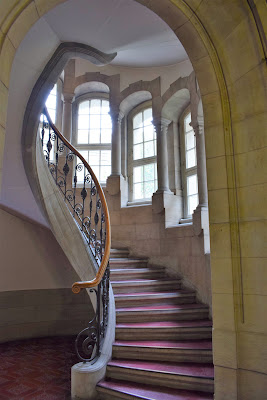 As a counter to the open space requiring community and social interaction, although it is easily to get lost and reclaim your anonymity in this vaste space, there are some secretive side stairs where you can get lost into your own thoughts and secrets, eventually before an important decision or testimony. 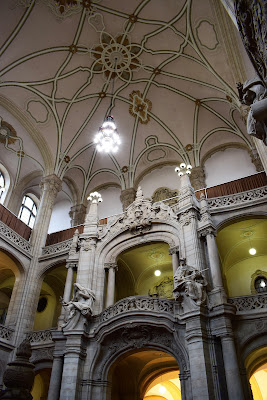 Every level offers a different perspective over the hall and reveals more interesting details. Initially, the court, which went through massive reconstructions in the last decades, the last ones after the reunification of Germany, had 21 courtrooms, extended nowadays to as many as 60. 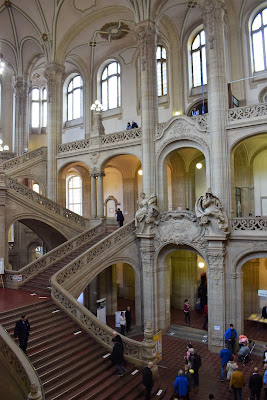 Besides sharing some common social values, this massive architecture has another aim, to intimidate, and the special choice of materials and inner disposition of elements do have a special social function, besides creating a beautiful presence. Such a style is called in German: 'Einschüchterungarchitektur'  - Intimidation Architecture. 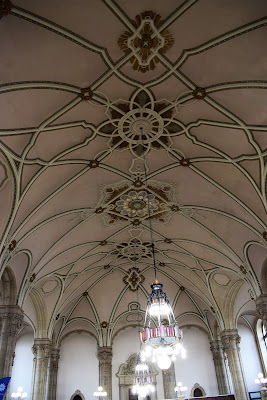 For the accidental visitor though, the beautiful details are far from intimidating, but an interesting testimony of the spirit of times. Such a massive construction is discretely illuminated, with natural light coming from the upper windows being complimented by small sources of lightning - compared to the massive scale of the building. 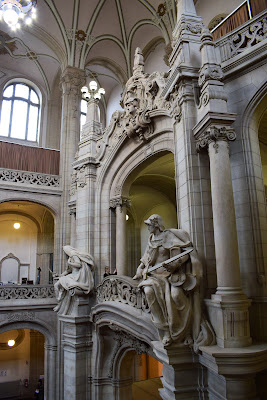 Those worrisome statues witnessed famous trials in Germany, the raise and fall of politicians, sport people or just simple citizens of the republic. Here was, for instance, put on trial in 1922, the 'beast from Schlesischen Tor', Karl Großmann, guilty for the murder of at least 20 women. One year before, the writer Arthur Schnitzler successfully pledged his case for an accusation of 'indecent' content for one of his plays. On a similar note, the famous graphic artist of Berlin life, George Grosz, was here to defend himself against the accusations of profanity. 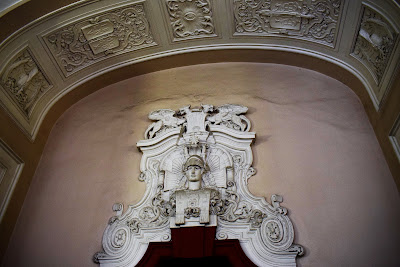 The list of famous trials continues with the famous case against the 6 'tunnergangsters' from 1995, that entered the Commerzbank branch of Zehlendorf through a tunnel under the building and after a hostage taking operations disappeared with bags full of millions of then DM. Or the trials of former DDR leaders Erich Honeker and intelligence chief Erich Mielke or the last president of the DDR, Egon Krenz, for killing their own people. Another interesting case was that of the former sport champions of the communist Germany, accused of regularly taking drugs for enhancing their performances.
Often, some of the processes were featured in German thriller novels, many of them based in the district of Moabit. 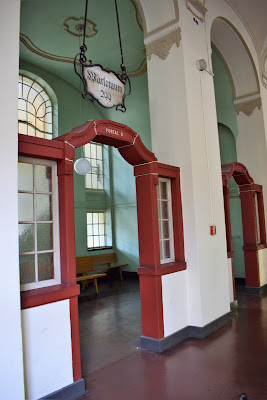 But all those famous characters are just simple citizens looking to prove their innocence, with thoughts of remords and hope for a right decision, while waiting to pledge their case or say their testimony. 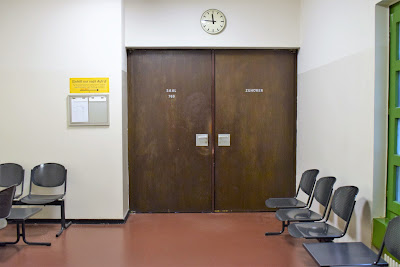 Most of the historical settings were preserved, but modern security systems were also put into place. Behind the brown wooden doors, there are modern computers and registrations devices typical for the 21st century. 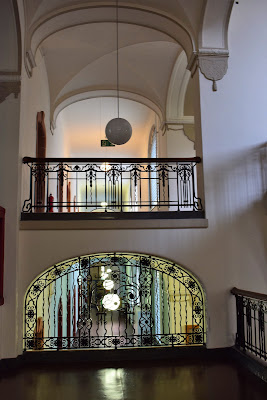 The open house event offered various opportunities for being familiar with the justice system and finding support in cases of harassment, domestic violence or bullying. 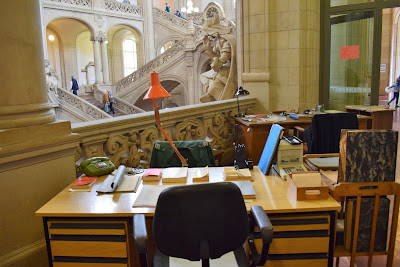 Particularly useful was the part dedicated to children, aimed at introducing the little ones into the secrets of the German justice system. A very practical introduction, that can be unforgettable and easier to remember than a theoretical class. 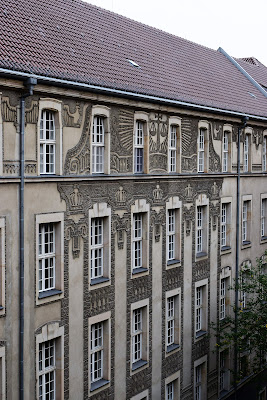 The inner court - which was not open to the public - is also an interesting, at least for the sake of architecture, with the symbols of the German state - the eagle - carved into the fassade, lace-like, creating another impressive visual footprint. 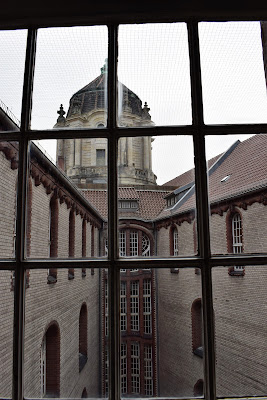 With all his terrible secrets, the Moabit Criminal Court was an interesting journey through law decisions and monumental architecture. It was a part of the Berlin history unfolded in the front of me and I am happy I was able to be part of this unique experience.
Posted by Ilana WD at 11:04 PM