A Colourful Visit to Bad Wilsnack

It takes less than ten minutes to reach Bad Wilsnack, on the way back to Berlin from Wittenberge, with my comfy ODEG ride. The entire trip was covered by a Brandenburg day ticket that costed less than 17 EURO, therefore I decided that it is worth to spend some time around this area and discover a new place. 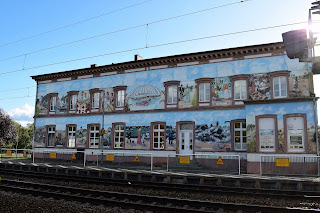 Bad Wilsnack is welcoming me with one of the most colourful train stations I've ever seen in Germany, besides the surprising train station of Uelzen. The scenes grandly displayed on the walls are sharing various episodes from the local history. At a great extent, the history of Bad Wilsnack is tightly connected with that of Wittenberge. Before Wittenberge was included on the Hamburg train connection, Wilsnack - which became 'bad' only at the beginning of the 20th century - had more population and was far more famous. The electrification and industralization changed dramatically the situation. 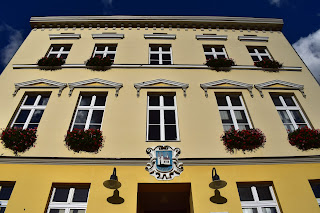 Nowadays, people are visiting this place mostly for the thermal baths, but I decided to make a difference and search for other interesting places instead. 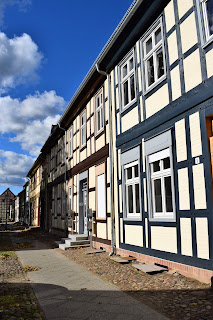 After ten minutes of slow walking from the train station, I am generously rewarded with the view of beautiful timbered houses, with some of the residents welcoming me with a smile and a 'Guten Tag', while they enjoy the sunny Sunday afternoon with their doors and windows largely open to enter one of the few warm days left from the 2017 season. 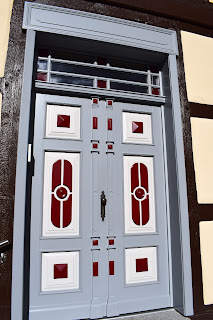 The doors are equally impressive with so many small colourful details. 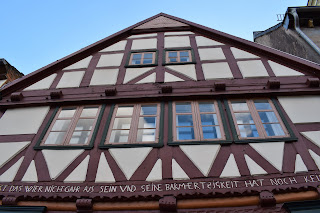 Most of the central area is made of those houses, which I am always happy to spot, either in Celle or in the Harz mountains. No one told me anything similar about Bad Wilsnack and I am happy to have discovered another colourful destination so close to Berlin. 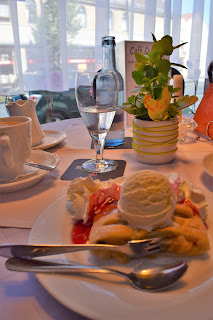 After so much walking (count on it also the long walk around Wittenberge, the first part of the day), it is time for a little foodie break, at one of the few places open for business this time of the week: Cafe Quitzow, for an Apfelstrudel adorned with a huge icecream scoop. Maybe it was not the best I had, but at least I had the chance to rest, exchange some words with the locals and get enough sugar energy for the rest of the rest of the trip. 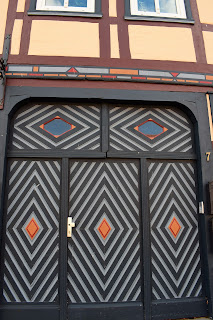 Which involved a lot of door watching as there is nothing like too many beautiful colourful doors. 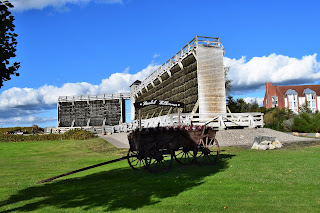 My last leg of the trip involved a short visit to the famous therme, which after everything I've seen in the town before, was completely unappealing. Which means that one day I will have to come back to check in more carefully because I bet there are some interesting travel and leisure recommendations waiting for me too.

For more inspiration, check the dedicated Pinterest board
Posted by Ilana WD at 12:16 AM