Mid-autumn season in Germany is a perfect moment to book some trips outside the big cities, in places reachable within hours of speed train rides in the middle of landscapes displaying the most beautiful colour shades from vibrant red to gold yellows. Compared to Berlin, some places might even have a much better weather, even they are less than two hours away.
Wittenberge was a place I've heard about when I visited Perleberg, at the beginning of the spring but my summer trips brought me in many far away places and for a while forgot about it. The name of the place returned into my autumn agenda, and I am happy to be on my way for a Sunday journey. 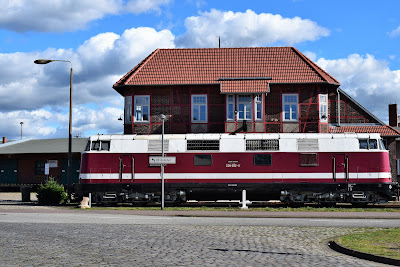 After a direct ride with the regional ODEG train, we arrived in Wittenberge, a place that largely benefited of the development of the railway network in Germany in the second half of the 19th century, particularly the Hamburg-Wittenberge connection. A tribute to this contribution is the train museum, a couple of steps away from the train station, which since 2012 displays the biggest collection of trains in the entire Brandenburg area. 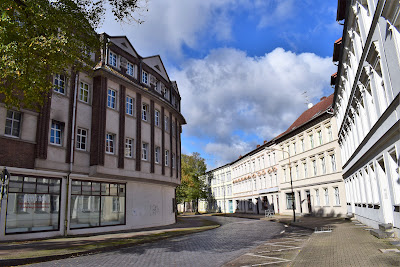 On the way to the city center, we walk near various small empty streets displaying a variety of architecture. 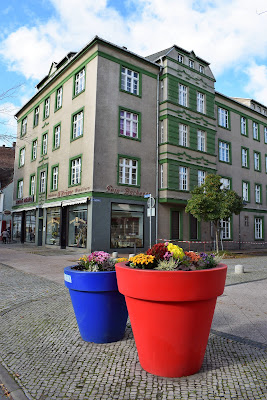 When the colours of the buildings are not enough, there are the flowers and the street decorations complimenting it creatively. 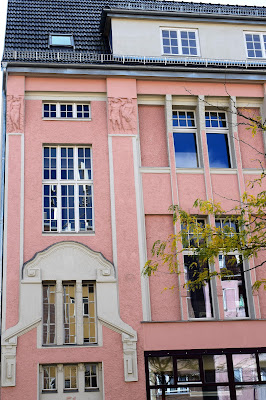 Wittenberge has also a rich Art Nouveau reservoir, displayed in the architecture decorations, but also in some of the antiquities shops. 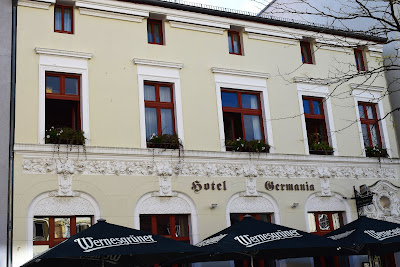 A direct beneficiary of the development of the city was the historical Hotel Germania, which remains a local landmark, welcoming visitors in the city for over a century. 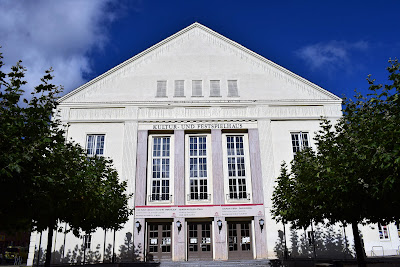 The Theatre situated in Paul-Lincke Platz - Paul Lincke, the creator of Berlin Operette spent some time learning in this city and he even created a piece called 'Grüße aus Wittenberge' - 'Best regards from Wittenberge' - is the main city cultural institution. On Sundays, around this area there is a local market taking place too. 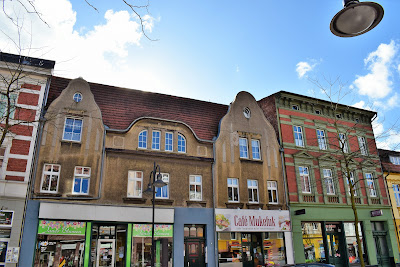 The old and new houses are displaying a variety of shapes and colours, a pleasure for my eyes always hungry to discover something new. 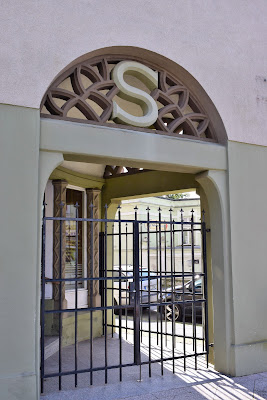 As usually in the small localities, many of the places are connected to different personalities and owners whose names are carved into the old stones. 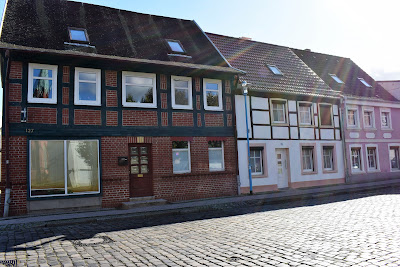 The old city offers a completely different architecture, which brings Wittenberge closer to Salzwedel and the cities around Hamburg. Half-timbered, one storey houses probably inhabited initially by the emergent middle class which settled around this Elbe town give a lot of work to my camera. 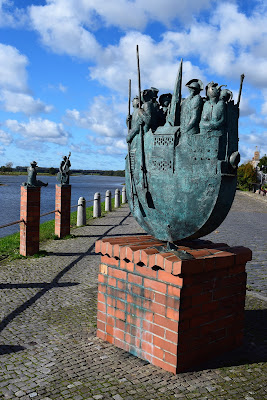 Talking about Elbe, the river connecting by water Wittemberge to  the great trade center of Hamburg and beyond, its promenade is a great place to spend part of the sunny days of autumn. With a view over the green pastures with slow cows having non-stop dinner and dog walkers, it brings a feeling of peace and quietness. The right moment to meditate to time travel experiences, emphasized by the statue created by the artist Christian Uhlig, originary from the Uckermark region. 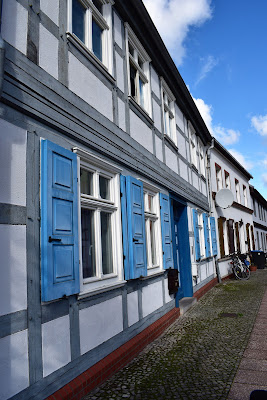 Meditation about travel and its perks, including through centuries continues while walking the cobbled streets bordered by colourful houses. 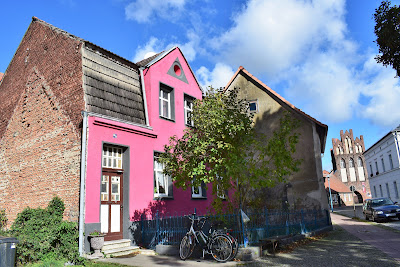 What I love is that often the old houses received new clothes but still remain well inserted into the landscape. The buildings themselves were used for various purposes during centuries, as in the case of the 13th century Steintor - Stone tower - visible in the back of the picture, which was a city entrance point but also a police station, but nowadays is mostly a space for exhibition of local artists. 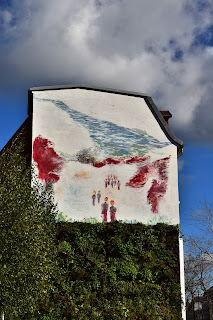 Although not as widespread as in the case of big cities, the street art can be found here too, even though relatively discretely hidding behind a thick wall of ivy bushes. 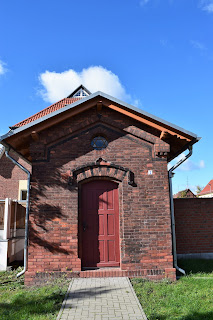 Nowadays, what used once to be the pride of the city that caught the industrialization virus in the 19th century, are mostly part of history or are converted into a more modern use. For instance, the elements of the electricity factory that operated into the city are now mostly displayed as historical testimonies of the fast development brought by the industrial revolution in the German lands. 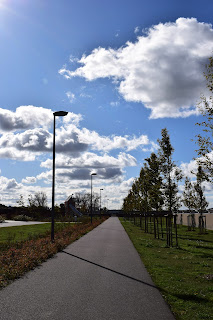 Nearby, there is a brighter part of the Elbe promenade, probably one of the most beautiful natural part of the city. The good connection to Hamburg made Wittenberge a stop for the Viking Cruises over the world, therefore, the international visitors can also discover this relatively unknown piece of Germany. 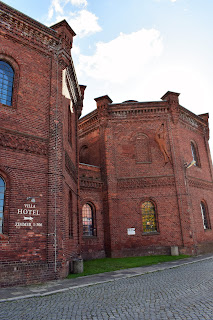 Some places with an industrial were completely converted in the last decades. The old oil mill, for instance, owned by Salomon Herz since 1823 is nowadays a hotel with modern art on the exterior walls and some local entertainment local attraction, as a climbing wall. 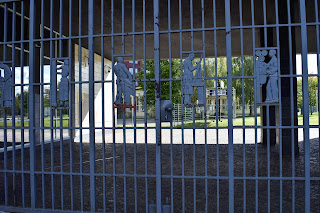 During the time of the separation, Wittenberge was part of the communist Germany, and displays of the busy working class heroes can be seen on the iron wrought gates of the Osz Prignitz former factory. 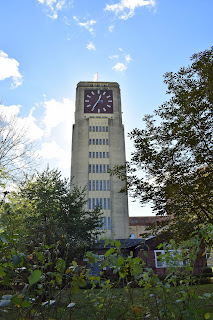 Lately, we arrived in the area of what used to be the Singer/Veritas factory for having a look at another famous landmark: the Watchtower, which at the time of the construction - 1928/1929 - was the second largest in Europe, with its 49,40 meter height. Nowadays, you can visit it and walk the stairs until the top, with beautiful views over the Elbe and the surrounding area. 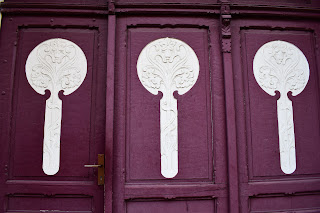 Too much industrial architecure might be overwhelming, therefore on the way back to the city center, I am spoiled with some fine art nouveau door decorations. 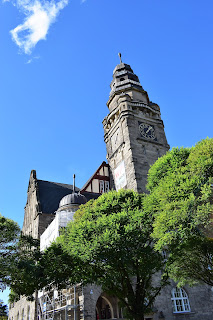 The latest stop of this trip is the massive city hall, neighbouring a small cemetery for the Soviet Red Army soldiers, an impressive contrast between the impressive stone construction and the small pinky square stones of the graves.
With all his colours, histories and achievements, Wittenberge is a town of contrasts too, and as usual, I am grateful for the opportunity of grasping just another fragment of local history.

For more inspiration, check the dedicated Pinterest board
Posted by Ilana WD at 1:37 AM