How to Survive a Winter Day in Schwedt/Oder, Uckermark

I haven't been away too often in the last weeks, mostly due to the unwanted and unexpected return of the harsh winter, which despite the shining sun, sent a minus two digits shock temperature making staying outdoors unbearable. Especially if you are not - like me - one of those winter lover, winter-proof kind of person, you better stay at home, planning your next escape, doing some more extra work and waiting for the spring. However, you can hardly keep me for too long indoors, and after carefully checking the weather forecast, a couple of weeks ago I've decided to make it to Schwedt, a town on my bucket-list since I've been to another place in the same Uckermark area, Lychen, the last summer. 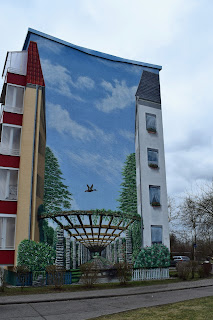 In less than two hours from Berlin, with a 17 EUR two-way ticket, we arrive to Schwedt/Oder ready to discover a new destination. Formerly part of the communist Germany, this city is the biggest in the Uckermark region and displays a colourful mind-blowing sometimes mural art, which gives a completely different touch to the classical Plattenbauten, the standard blocks of houses typical for the German communist architecture. The one near Julian Machlewski Ring creates an interesting visual illusion that almost invites to enter the reality of the drawing and enjoy, maybe, at least a better weather. 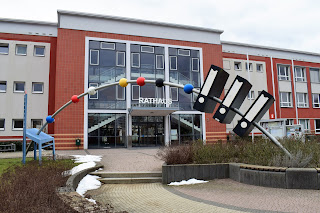 The city hall - Rathaus - looks also like part of a suprarealistic dream, displaying the vision of the German artist Siegfried Mehl about how the public institutions and citizens should be connected. An almost poetic dancing move from the street, through the files, until the demanding citizen. Hopefully this vision inspires the bureaucrats starting their daily shifts... 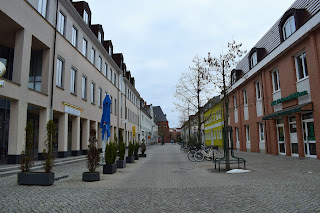 We advance into the almost empty town looking for more interesting discoveries. The old cobblestone streets, bordered by one-storey buildings are part of a former main road aimed for tranportation of goods in the region a couple of centuries back. Vierradenerstraße, for instance, is full of historical references about the industrial trade past of Schwedt, worth a reading - in German - if you want to better understand the history of the local economy. 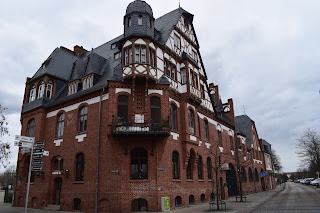 The typical red-bricked Brandenburg gates are a reminder of the old times, when trading was intense and the main central streets belonged to middle-class busy citizens. 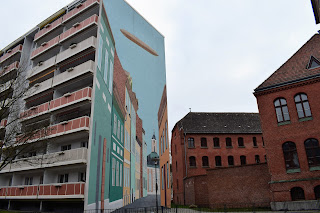 The colourful mural art is everywhere, Schwedt being famous in the Brandenburg area, among others, for its exquisite collection of such works. 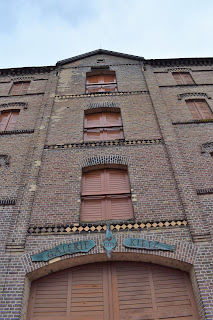 But Schwedt also has a pretty intense cultural life, with the exhibition place at Galerie im Kietz open to local artists. Another cultural attraction for visitors is the Stadt Museum, useful if you want to understand more about the local history, where also a Jewish ritual bath - mikwe - can be seen. One day prior to my visit, the National Chinese Theatre has a show here, and regular conferences and events are taking place all round the year and the week. 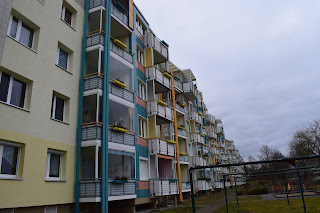 The more time I spend on the streets of Schwedt, the more surprised I am about the colourful facades, a very inspired way to make life in a city less gray and a bit bubbling, regardless how far away from big attractions where history is made, you may be. 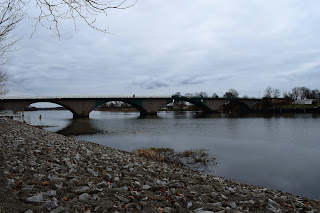 A walk on the shores is always a relaxing experience, that will not make you regret any single second to live in such a quiet place. 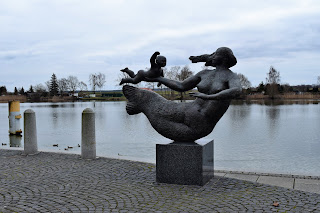 After a short cappuccino break at Karel Bakery, a very busy place with a view over the river, we feel more refreshed for the next walking legs of our trip. 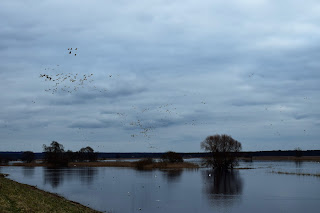 And there is even more to explore. Schwedt/Oder is since 2008 National Park city, the first place in Germany to be assigned such a distinction. The reason why I wanted to come here is because I need so much to start hiking again, and this place checked all the boxes for the time being: close to Berlin, relatively easy, a beautiful landscape. You can also bike and jog around, and with simple sport shoes you can definitely reach the number of weekly healthy steps in less than a day. It is also a couple of kilometers away only from Poland. 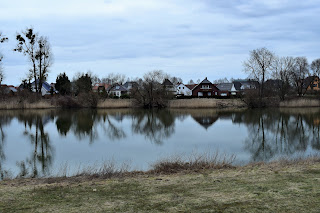 The path is plenty of local people that also decided to walk this Sunday, some of them accompanied by dogs. When we cross path, we slightly nod towards each other. The solidarity of solitary hikers... 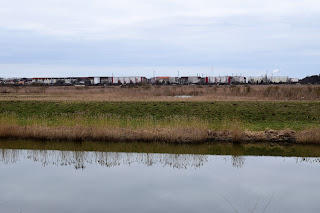 Hiding behind green fields, there are the traces of the recent history and its specific architectural patterns, with the industrial silhouettes. 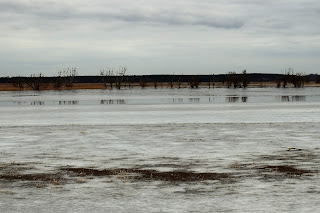 The quietness of the frozen nature is overwhelming, and although the temperature was not very friendly, I succeeded to have a great reflective time, exactly what I expected from this trip. 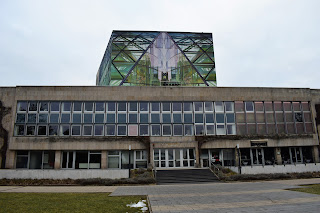 While on the way back to the train station, I am again reminded that Schwedt means more than nature walking. The local theatre is another center of cultural life here, with visitors coming here all over the Brandenburg region to attend, especially in the summer, various theatre performances or concerts. 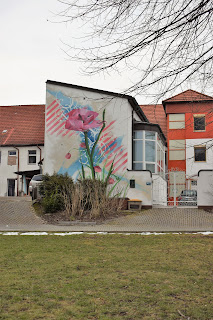 As I am counting the days until the spring and summer will allow me to discover another part of Schwedt, while exploring more from the National Park, another colourful elaborated mural reminds me that there is always something interesting to see around Berlin, and by far, Brandenburg and especially the Uckermark region do have many resources for a successful day trip.

For more inspiration, check the dedicated Pinterest board.
Posted by Ilana WD at 2:13 AM