Spring in Berlin - A Love Story

There is a children German song which says that 'April does what it wants', and it has to do with the sturmy strange sometimes hard to cope with weather that is usual for this part of the year in this part of the world. After March is done, you expect April to open up with warm temperatures, longer days and a lot of sun. Instead, this April filled the longer light hours, with minus two digit temperature and snow and wind and snow. Until two weeks, when a happy turn of weather events suddenly brought spring back into our poor sun-deprived lives. 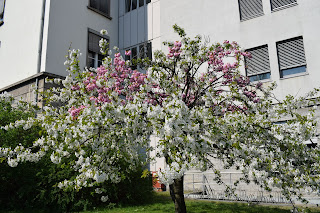 As fast as the indecent rests of snow are melting, all the pain is forgotten and forgiven and pleasant activities like sunbathing or outdoor coffee drinking makes you feel like it is no tomorrow. And better keep this mood on, as September is only a couple of months away anyway... 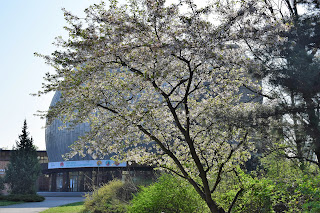 My head up the cloud 9+ of happiness and the camera on my shoulder, I crossed Berlin to check what's the situation of the cherry blossom, revisiting old favorite - mostly secret places - and discovering new ones, fully enjoying the good healthy vibes that always accompany new beginnings. Early in the morning, in Prenzlauer Berg, small white flowers surrounded the Planetarium with an elegant hallow, inviting to meditation and slow life. 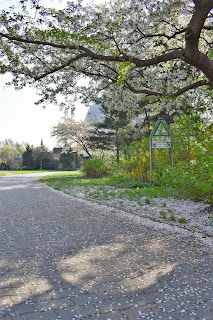 Hopefully, for a long time from now, this is the only snow I will see. Although, once in a while, I may miss the real snow time adventures, but for a couple of hours only. 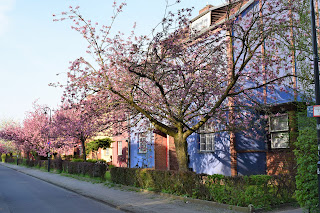 For the best cherry-blossom views, I have at least one secret place that I love to revisit often: Hufeisensiedlung (residential colony) built in the 1932 and since 2008 part of the UNESCO Heritage List, situated in the Britz side of the city. 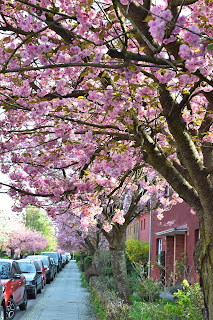 During the cherry blossom time of the year, the narrow streets between the Parchimer Allee and Fritz Reuter Allee, bordered by one-storey small colourful buildings are surrounded by neon pink puffy clouds. Life here goes always normal, without the usual invasion of selfie-takers which are common everywhere where the cherry trees are in full blossom. Only the local residents making their way to their houses, in a sea of pink fluffy small flowers. 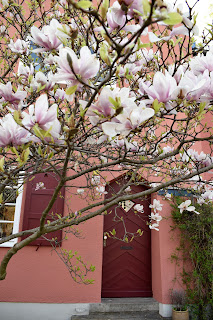 Those daring to spend more time on the alleys are rewarded with the addictive smell of some white magnolias, already loosing their petals covering the pavement with a hectic spread of white shells. 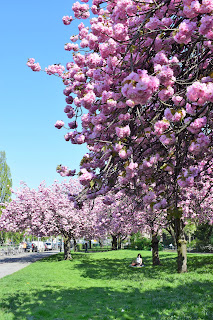 In the Western part of the city, there is another favorite - almost secret - cherry-blossom place of mine: the trees near Hohenzollerndamm U3 metro station. All the rest of the year, one may pass near this part of the long Hohenzollerndamm street completely indifferent, except for a couple of days when the cherries planted there are in full bloom. As the trees are in the middle of a small green park, you can even take your picnic basket and have some treats and a glass of Prosecco under the cherry trees. 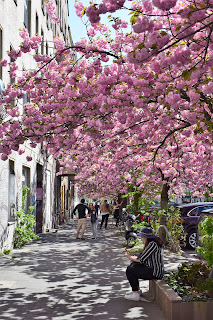 Spring bloom makes even the most anonymous and communist-looking streets into jewels of nature street art. Back in Prenzlauer Berg, the short-lived show of pink flowers on Sonnenbergerstraße (near Schönhauser Allee S-Bahn) is an entrance into a magic world. The branches covered by flowers are hardly fitting the narrow streets, aiming with a part of their top into the standard windows of the old-times buildings on the other side of the street. 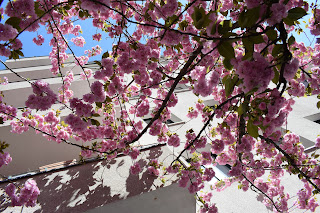 Like everything that has to do with nature, cherry blossoms are also a reminder that time is tight and the beauty of the day is as short-lived as a dream. But some dreams are good to be lived fully. As every single second of life!
Posted by Ilana WD at 10:18 AM