There is one serious reason why I am in Stendal - for tracing a literary history. The French writer Stendhal was on my reading list as a teen - I've read the original version of most of works, thank you very much mom - and his name was inspired by this place. He added the 'h' for a stronger outline of the German origin. One reason for the choice was his admiration for the art historian and archeologist Johann Joachim Winckelmann, born here, but also a love story he had with a blonde beauty, that lived close from this place, that he called 'Minette'.
Enough reason for me to take the one-hour ride to a town I didn't know too much about... 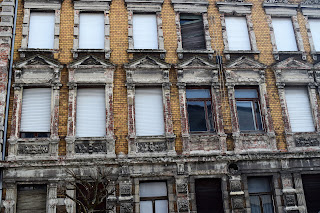 Walking from the central train station, my companions are derelict buildings, waiting for some serious investor to save them from the inevitable destruction or maybe only for some local council funding. Yeah, it seems that my evaluation habits from the short time I've worked in real estate die hard... 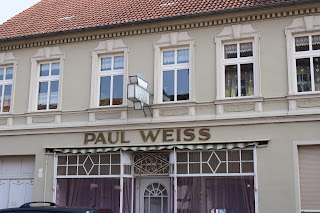 Old brand company names are making a things a little bit better. Once on Hallstraße, the small houses are more friendly and a sign of better life from the around 40,000 inhabitants of this Hanseatic city, close to Hamburg. Things are getting only a bit better, once the Art Nouveau samples on the classical red-bricked buildings are creating more complex urban stories. At least for the architecture view, my visit schedule looks slightly improved. 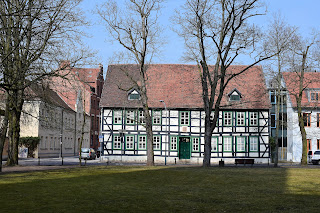 Closer to the center of the old town, the views that I had a couple of minutes into Stendal are already history. Right now, I am welcomed by timbered houses with colourful doors, and a green area inviting to chilling and relaxation. I wonder though where are the locals spending their time, as I can hardly meet anyone walking the narrow cobblestone streets. 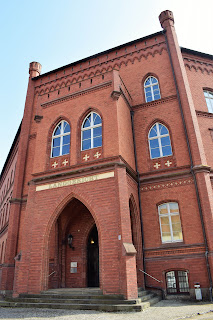 As usual, there is always something specific about the buildings of legal institutions in Germany, as I've learned during my visit to the Moabit Criminal Court last year. Wherever you go in Germany, the local courts do always have an outstanding architecture, and the local legal court - Landgericht - in Stendal is another example in this respect. 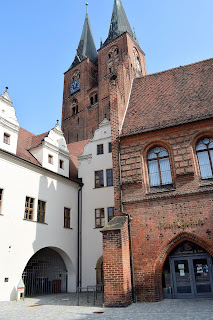 The central area is dominated by the building of another institutions which is always outstanding in Germany: the city hall (Rathaus). The fragments of old and new architecture are beautifully coming up together in Stendal. 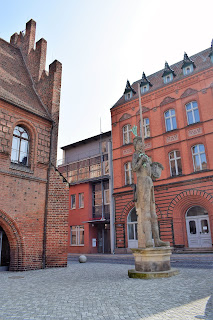 The famous Roland is a frequent appearance in many Northern German cities, part of the heritage from the time of the Holy Roman Empire. The most famous is in Bremen, but local variants can be also encounters in small towns like Perleberg. The statue represented the city liberties, but symbolically, it was associated with its special powers of watching over the city and its freedoms. In many cases, a second statue pf Roland was hidden in a safe place, in case that the original one would have been destroyed. 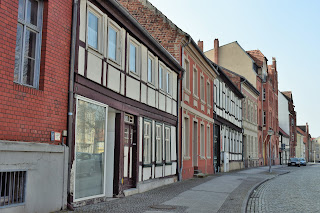 The Sunday keeps being quiet in Stendal and we are using our time for a solitary strolling of the narrow streets bordered by beautifully preserved timbered houses. My favorite is Altes Dorf street, a former village added to the city, where time seemed to stop somewhere in the 17th century. 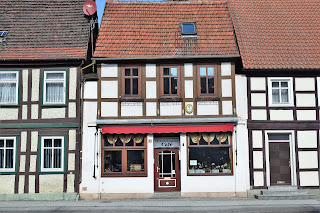 Nearby, there is the museum dedicated to Winckelmann, hosted in the house where he was born, at the beginning of the 18th century. Among many other achievements, Winckelmann was the founder of modern archeology, and also of art history, as he introduced clear specifications and categories into the history of art and various historical styles. As of January 2018, the museum was closed for renovation and will be open some time at the end of the year. A good reason to return to learn more about this personality. 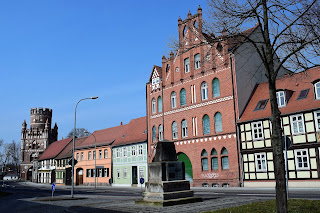 Observing the architecture styles of the streets is part of my travel homeworks, and Stendal gives me a couple of good food for thought. 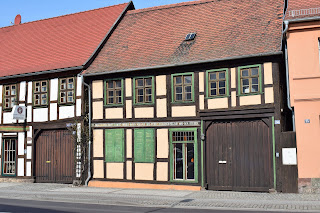 It is a sense of home that people living here may have it while going inside their small colourful historical houses. A home which most probably is part of a multi-generational history. 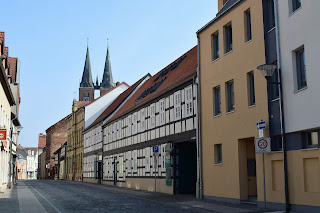 Most restaurants are closed for the day, but I spotted a couple of Indian - weirdly, serving pizza too - but also Italian or classical Chinese fast-food parlours. 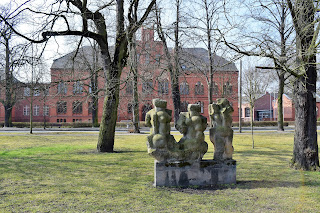 The main park keeps being empty - the weather may look sunny but it is still one digit though - and as we are heading back to the train station, there is still no soul in sight. 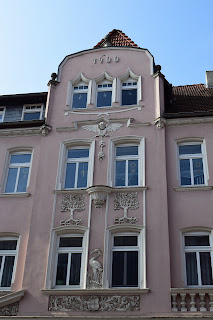 But another glimpse into a beautiful Art Nouveau building made me count the wins of this short trip to Stendal. Disappointed that the Winckelmann museum was closed and that I couldn't get a real vibe of the place - the case with almost all the places I visit in Germany during the winter anyway - at least the architecture and the local spirit gave me a modest idea about what it means to live here. For now, it may be enough, until a return, one day, for a reason or another.
Posted by Ilana WD at 12:26 AM