I often change my travel plans on the spot. Especially when I am passing near a place that I realize it may be interesting for one of the thousands of reasons I usually chose for travel. When on my way to Luckenwalde, Trebbin was an appealing option for some extra hiking in the Nathe-Nieplitz Natural Park, but somehow it was a bit too late getting a full taste of the place so decided to book a day there the next week. 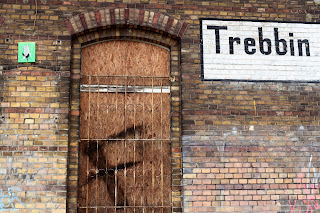 In less than 30 minutes by train from Berlin Südkreuz train station, I arrived together with other people happy that the weather is getting warm enough for biking around Berlin. The surrounding enthusiasm almost made me ignore the relatively end-of-the world feeling of the train station. 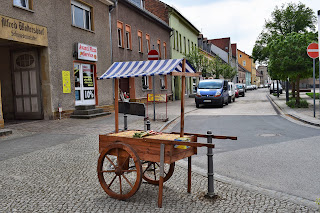 The more I am getting away from the train station, direction Bahnhofstrasse, Berlinerstrasse, the views are getting better and better. As Trebbin is very close to Beelitz and part of the 'asparagus route', there were many charts selling Germany's favorite spring veggie. Very often though, the precious asparagus - or rhubarb, or eggs or some other local products - were just left in the front of the house with a small piggy bank nearby where to leave the money after the self-service. I've seen this in Werder last year and it is relatively common practice in the small localities around Berlin. It is a system based on trust which seems to function very well in small communities. 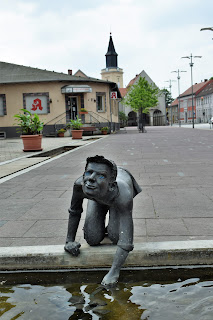 In the history of German literature, the 800-year old Trebbin is singled out as the place of birth of Hans Clauert/Clawert, a character from the chronicle of Eulenspiegel. His fictional memory is celebrated with a joyful representation in the front of the city hall which reminded me of the Calauers', also in the area around Berlin. 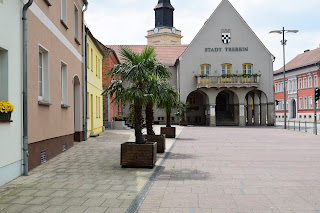 The building of the city hall, with a row of palms in the front, looks a bit more like a little rich bourgeois mansion than a serious bureaucratic institution. 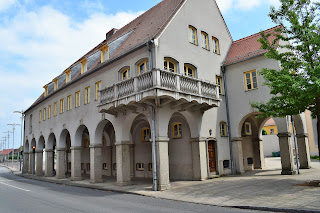 As it was weekend, everything was closed, but would have been a bit curious to have a look inside the building, as many such institutions in Germany do have some interesting halls or interior decorations. 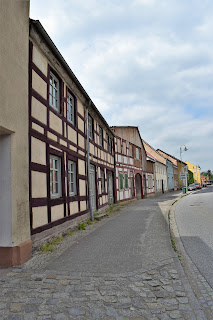 Our trip continues with Luckenwaldestrasse and the streets around, bordered by timbered houses out of time, colourful and well preserved. 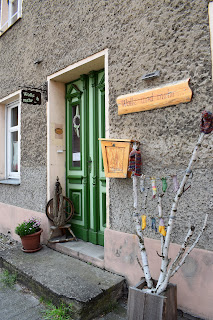 Many of the shops are also out of time - not necessarily a compliment, especially if you look at the ones selling clothes, very fashionable probably in the early 1960s - but do also have some very homely hobby ones, inviting you to have a look, if not to purchase anything. 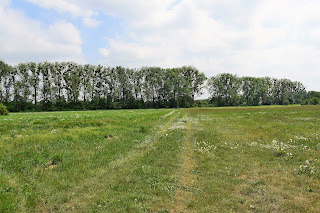 But all those observations and things I see on my way are secondary, as my main aim for this trip is to do as much hiking as our feet can in the Nathe Nieplitz Natural Park. After such a harsh cold winter, I want and need green landscapes to soak my eyes into. Take care what do you wish for, as I am rewarded generously with peaceful views. 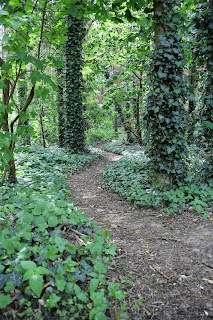 The ways through the forest are equally beautiful, with majestic trees covered in ivy or green leaves. 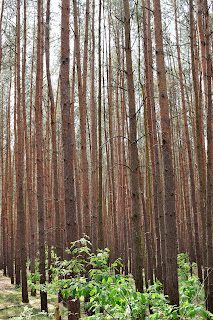 Or magic landscapes where you may expect some fantastic creatures to cross your ways. Nothing so far happened to us, with no single soul around to bother our zen world. 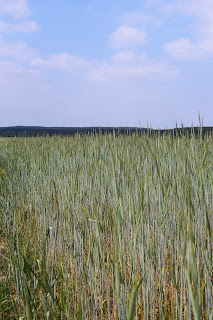 Nothing compares to the view of the fields in the summer, with their golden yellows and touches of green, blessed by the geenrous rays of light. 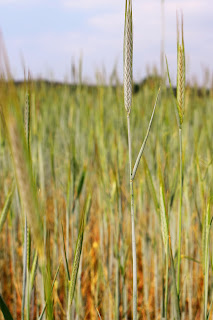 Far from being a countryside girl - at least not when it comes to assuming the survival chores required for such a lifestyle - yet fascinated by the beauty of nature that I cannot understand, only describe in sometimes cheesy words. 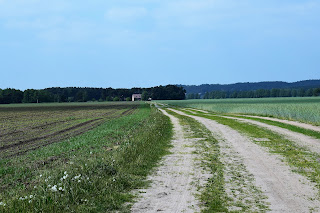 We keep walking and walking, with a short stop for refreshing with water, fruits and some snacks. People are biking or walking their dogs near us, uttering polite 'hellos' or just fast forwarding at high speed. Is place for all of us under the sun, after all. 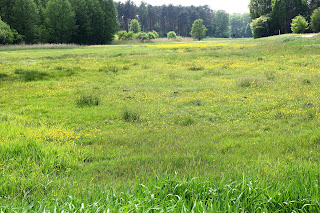 I can hardly put the camera aside, trying to catch in my pictures as much balance and love for nature and peace that can help me when back in my busy urban life. 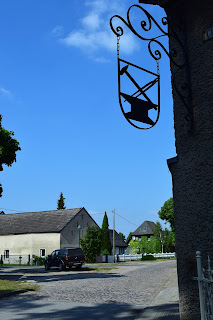 Urban life that in fact I cannot stay away from more than a couple of hours. My nature voyeurism ends soon and I am back on concrete, looking for some more houses and familiar signs of human life. 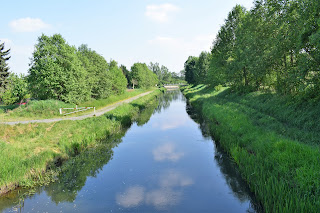 But when a place like Trebbin is situated in the middle of such a beautiful wild landscape, the separation between 'nature' and 'culture' is never complete and both sides of life are there to remind you to pick up only what really matters in life. 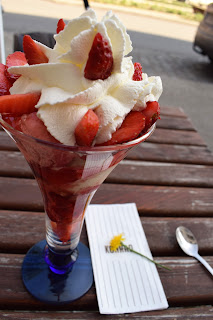 Which, in my case, is a generous strawberry icecream cup at the Konrad near the city hall. I may only look for coffees and cakes - and a couple of months the year also some icecream, but, you know what, it's my life and no one else's...
Posted by Ilana WD at 1:30 AM

Email ThisBlogThis!Share to TwitterShare to FacebookShare to Pinterest
Labels: 100 places to see in germany, clauerstadt, germany tourism, nathe nieplitz naturpark, one day trip from berlin, visit germany, visit trebbin, what to do trebbin