A Lovely Discovery of Ingolstadt

There is more than one way to refer to Ingolstadt, Upper Bavaria's second largest city: the city of origin of the still religiously respected 1516 Bavaria Beer Purity Law or the location where Mary Shelley's Frankenstein created his monster or the place where the Bavarian secret society Illuminati was created in the 18th century, being some of them. For me, I will always remember this city for the strong fragrance of lime trees in full bloom that accompanied us a long way from the train station. 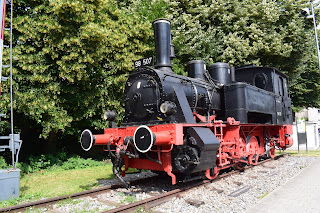 We arrived from Munich after a 50 minutes ride, in a train full of commuters. Bavaria's capital city may be prosperous, but Ingolstadt also has its share to the local economy, here being located the headquarters of the German automotive brand Audi (the automotive industry was relocated here in 1945 after the war following the destruction and requisition of the factories from the then Soviet-controlled areas of Zwickau and Chemnitz) or the defence aircraft giants Airbus, as well as of the electronics shops MediaMarkt and Saturn. The industrial and economic dvelopment of the city started at the beginning of the 20th century, when the rail and transportation connections included it on the greated map of German industrial development. 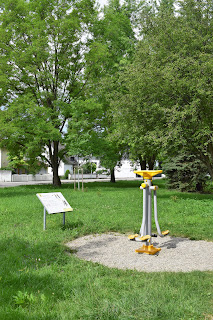 With plenty of time to spend, we decided to take a relatively unknown risky way and made a little detour from the way to the center.  A good occasion to observe the local housing architecture and take a little walk through the park in Maxilimianstraße, with its deserted outdoors sport facilities. 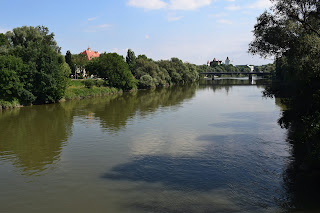 After asking a couple of locals, we were directed to the right way to the central/historical area, which involved following the Donaudamm, crossing a small forest where our only travel companions were bikers on the way to work or for the early morning tours. But I had eyes only for my very old Danube/Donau friend. 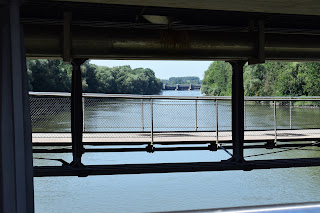 I stalked the Danube in so many places: from Bratislava to Vienna, Budapest and the Romanian Danube Delta, Bulgaria or Serbia, but also Regensburg. I've seen it tired by the illogical human intervention - like in the case of the Danube Channel in Romania - or wild - at the border between Serbia and Romania - or a bit muddy and dirty, as seen from the Bulgarian shore. In Ingolstandt, it is just quiet, decent yet overwhelming, a display of grandiose majesty. 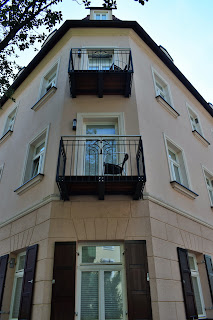 As we are approaching to the central/historical area, multi-storey buildings and touristic directions abund. I've seen so many images and read quit a lot about Ingolstadt, but I was not sure what exactly to expect here. Granted city status since 1250, it was a stronghold of Catholicism - as many other Southern German territories - during the Reformation, and a former fortress city. However, as we advanced to the city center we noticed a mix of buildings typical for the 1960s, made of concrete cheap materials which reminded me a bit of Pforzheim or the outskirts of Stuttgart. 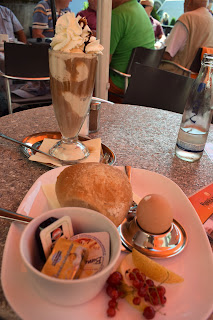 But first thing first, let's have a short breakfast, at the Cafe Mohrenkopf on Donaustrasse which pleasantly surprised us with a fast service and a nice outdoors ambiance. The breakfast is served there between 8 and 15 o'clock and includes various variants, with boiled eggs, butter, bread and jam as the minimal offer. Near us, at a long table, some locals were loudly and with animated hand movements sharing experience about the habits of the different nationalities to whom they were renting rooms for the summer time. The conclusion: Ingolstadt seems to be well sought around the globe as a summer destination. 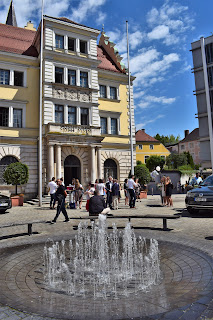 But people are not only visiting Ingolstadt, but also living and settling here. In the front of the historical City Hall, a couple just celebrated their moment of 'yes', with flutes of champagne and enthusiastic friends' support. 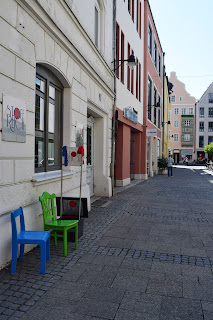 Some streets were full of life, people or bikes, some were just quietly waiting probably the middle of the day for more animation. Part of an initiative of the local authorities, blue and green chairs are spread all over the city, inviting for a moment or two of rest, especially recommended during the shinning summer days. 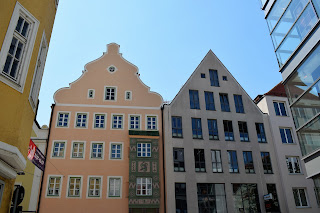 The small central area is bordered by both modern and classical architecture, where the new style and the consumerist cities of the modern citizens harmoniously meet. Ludwigstraße area is also the host of the Thursday evening market, every day from April to July and September to October, between 15 and 20 o'clock, a good opportunity to check some local Bavarian products - and eventually some great beers too. 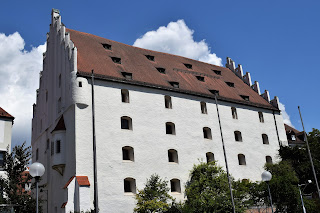 A couple of meters away, the white triangular-roofed building of the Herzogkasten dominates the area. It is the oldest non-religious building in Ingolstadt, nowadays the state library. 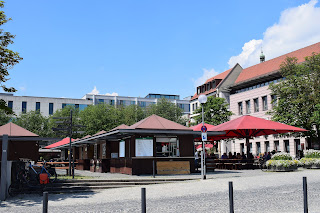 The Viktualienmarkt, a local variant of the homonymous Munich's Oktoberfest headquarters is inviting the visitors for a pint, an opportunity which I promise to not miss the next time when visiting Ingolstadt. 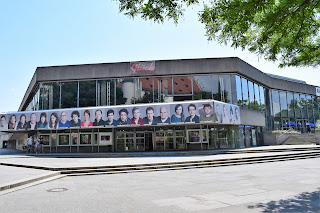 From the other corner of the square, German-speakersculture lovers are invited to the Stadtheatre, whose brutalist architecture reminds me of the similar institution from Stuttgart. 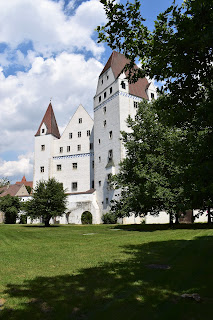 With some more things to see on our travel agenda, all we can do is to have a short stroll along the green area in the front of the castle, for a tour and more observation about the architecture before heading to our next destination. 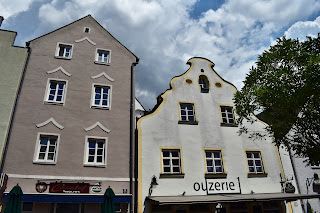 The elegant curved roofs of the houses on Dollstraße are by far my favorite sights, with their small restaurants and coffees, some of them with people waiting in line during their lunch break. 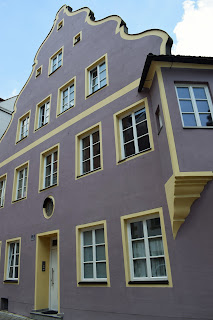 Newly renovated, few of them display bold colours which bring more visual dynamism and surprises to the urban landscape. 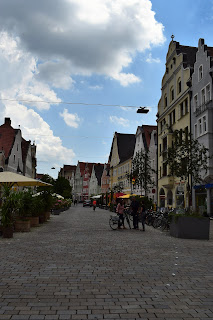 As I am further walking on Theresienstraße, I am easily caught into the cozy ambiance of this place, and the sunny days are a good incentive to add another star to my rating of Ingolstadt. 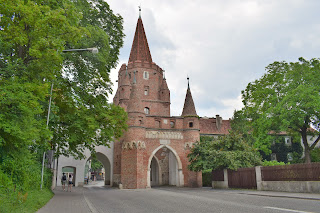 The remaning city walls and towers, such as the Kreuztor, make you efortless think about shifting between centuries. 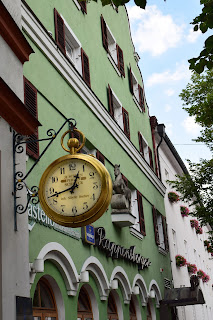 Some corners are too beautiful to not stop for a couple of minutes, and on both Kupferstraße and Harderstraße, we stop more than once for just another picture or for trying to figure out the history of a place. 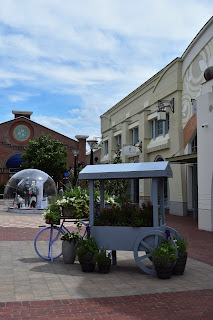 There is one little cute place where since visiting the Bicester village in England, wanted to check in Germany. It is not a museum, or a memorial house, or a high-cultural attraction: the lovely Ingolstadt Outlet Village. 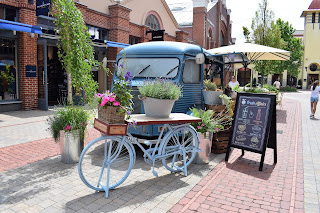 We arrived there with a bus from Ingolstadt's second train station, Nordbahnhof, with the no.20 bus. As we've been there during the week and the summer holidays in Germany and the world are a couple of weeks away, the ambiance is relatively relaxed, populated mostly with locals. As I've been in Germany before to the Elstal and Wolfsburg outlets, which I've found rather modest in terms of brands, I can rate Ingolstadt with a geneorous 5 stars. 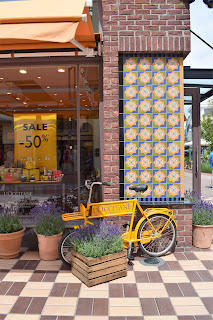 The reason I place Ingolstadt so high on my shopping outlet list is not only for the variety of brands and the sales of as much as 80% - from Prada to Jimmy Choo, Missoni, Cavalli, Gucci, Versace and Armani - but also for the stylish design of both shops and the outdoors. 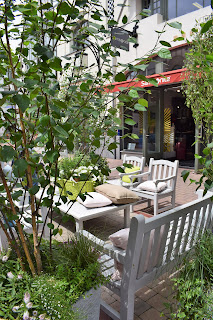 The food offer is relatively limited compared to Bicester Village for instance, with a lot of fast food places to grab some sandwich before the next purchase, but with plenty of cozy stops surrounded by luxuriant vegetation. 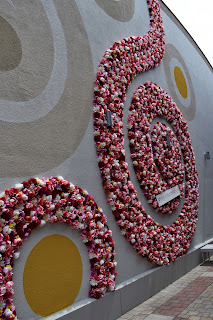 Not to forget about the flowers' arrangements, which make it into the perfect background for fashion bloggers and Instagramers, some of them working hard their next post while we were there. 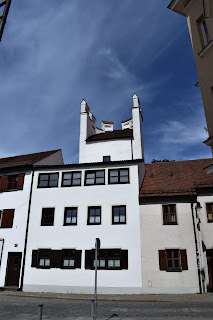 While we are heading back to the train station for the 4-hour trip back to home, sweet home Berlin, I realize that although I am living Ingolstadt with a long list of things to see, I am given enough reasons to appreciated what I've already seen. Although less picturesque and spectacular than most of the Bavarian cities I've seen before, it has a homely charm that would love understand better one day. 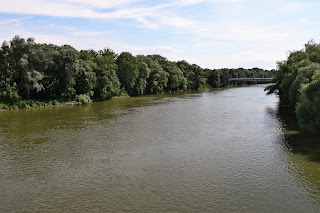 As we cross the Charles de Gaulle Bridge - the French president and WWII hero was a WWI war prisoner for a short time in Ingolstadt - we wave good by to the Danube, sure that it is only a matter of months until I will buy my next train ticket here. Or to any other place in the Bavarian part of Germany.
Posted by Ilana WD at 5:13 AM