A Lovely Trip to the Linderhof Castle

Since visiting the most famous South Germany's castles Hohenschwangau and Neuschwanstein two years ago I've promised myself to come back to see the rest of the architecture and cultural endeavours associated with the mysterious Ludwig II. The opportunity arose a couple of weeks ago when I went to Munich for a full day of work and decided to book some time for a visit to one of the less known but equally beautiful: Linderhof Castle. 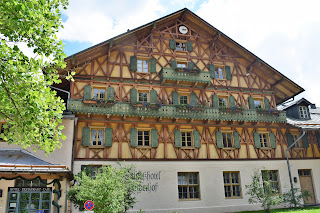 If you want to go there using public transportation from Munich, you need a bit of patience and some available time. From Munich train station, with the Bayern Ticket (22 EUR) you take the regional train until Oberammergau. From the stop in the front of the train station, using the same ticket, the bus 9622 that in around 30 minutes will leave you in the front of the entrance to Lindenhof Castle.
The trip in itself is worth taking, the small road path crossing impressive forest capped mountains with colourful houses spread as lively dots on the light green tapestry. 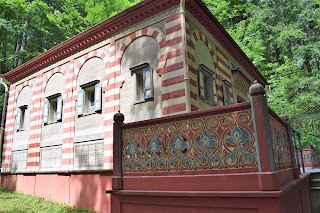 Once buying my ticket and getting ready for the tour of the castle - as in the case of Neuschwanstein and Hohenschwangau, the tour of the interior is possible only under guidance - the surrounding landscape left no space for thoughts about future as everything was only about now and then. The first stop on the slopped paths was the Moroccan house, a small little house with a fassade decorated with Oriental motives and architectural add-ons. 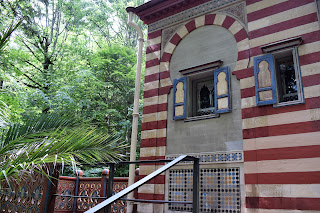 Ludwig the IIth was fascinated by the world of the 'Orient' and its esoteric mysteries and the Moroccan House was actually added to the precincts only later. Initially, it was part of the World Expo in Paris in 1878, and was transferred here from a small village near the Austrian border where it was initially brought back from the Exhibition. 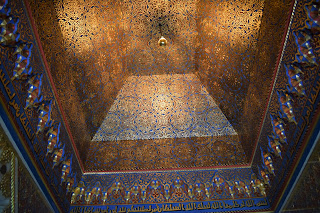 Both the interior and the exterior of the House were renovated a couple of years ago. The interior view is available only through a glass in order to protect the fine decorations, but the beauty can be easily caught from the other side of the transparent thick walls. 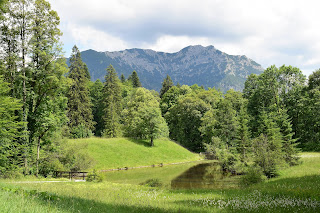 The man-made beauty joins the outstanding natural landscape of the Ammergauer Alps. 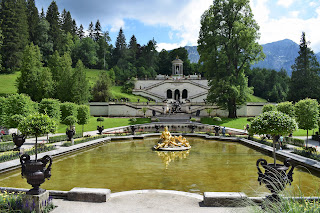 In the middle of all this, the incredible gardens of Linderhof Castle offers another example of fine architecture and out-of-time inspiration. Initially, Ludwig II intended to make Linderhof, a former agricultural and hunting estate of his father, King Maximilian the IInd of Bavaria, into a copy of Versailles, to which to attach a Byzantine Palace. However, given the slopped natural environment, such a plan was not possible and the ideas used and at a great extent implemented in the case of the Chimsee Palace (on my list too). 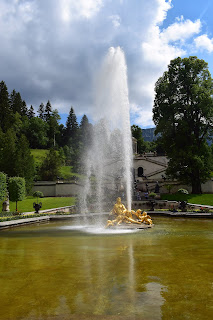 The final works of Court Garden Director Carl von Effner suits very well the natural landscape, embelishing the natural beauty with discrete handmade jewels. The fountain in the middle of the biggest lake springs every couple of minutes requiring the full attention of the visitors - not as many as in the case of the other Bavarian castles, but this can be also due to our visit in the middle of the week - and their mobile devices. Aware probably of the interest of this location for the Instagram and social media users in general, the administration of the castle offers free WLAN on the property. 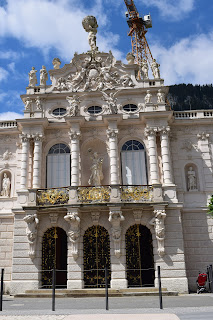 The castle as such, where we are offering an dynamic 25-minute tour, is relatively small but displays the best of the German rococo. From the tapestry chamber to the dining and audience rooms, the choice of style was in vivid colours, silky walls and golden framen mirrors and matched colourful Meissen porcelain, whose manufacture I had the chance to visit a couple of years ago. Photos inside the castle are possible only with special permission. 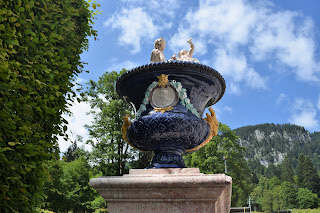 Out of the many Bavarian castles associated with the life and imagination of Ludwig II, Linderhof was the only one where he lived and saw completed during his short life. 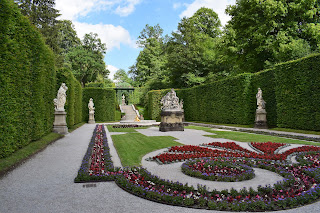 Slowly, we are touring the manicured gardens and alleys, recreating a French spirit in the middle of the Bavarian natural ambiance. The rich beauty of the flowers makes me think that although snow capped mountains are always a Romantic view, summer when nature is in full bloom is the best time to visit this palace. 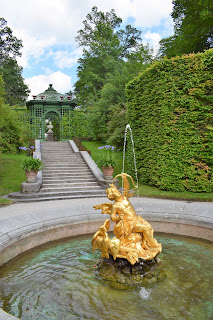 The green walls create pavillions and intimate corners where you are completely alone. Some corners look like fragments of fairy tales, especially when it involves some golden figures places in the middle of fountains. 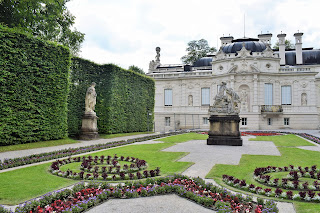 From the small windows of the palace, a feeling of harmony, peace and order is displayed to the viewer. 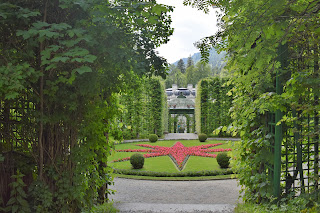 The rich vegetation is hiding corners and small gardens where the human work is less intrusive, yet creating its own footprints. 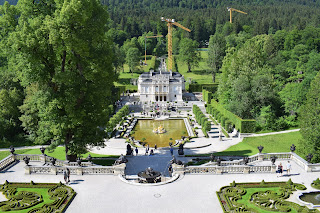 More renovations are under way and the famous Grotto was also closed to the visitors during our visit, but from the top of the gardens pavillion, the overview of the elaborated gardens guarding the stairs is hearthbreaking. Although Ludwig II was rather a person of extremes and extravagant behaviors, the work of adapting his wishes completed by the constructors, gardeners and architects created a world of balance and equilibrium with a beauty which cannot be diminished by the passing of time. 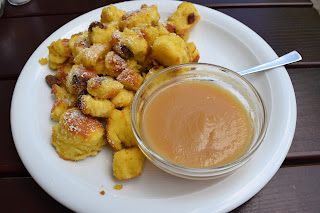 Waiting to make our way back to Munich, our final stop involved some local threat: the famous treat within the former Habsburg empire, Kaiserschmarrn. A shredded pancake, whose name in the local Austrian and Bavarian dialects can be also translated as mishmash, it is made of flour, eggs, milk, sugar, salt and raisins and served with the apple sauce (Apflemus). 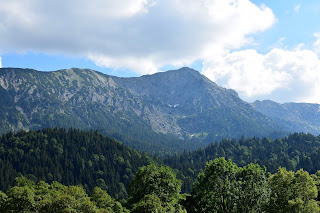 As someone who spent at least one month the year as a child exploring various Alps and mountains all over Europe, the view of this part of Bavaria is just an encouragement that I should come back soon for more. I may love castles a lot, but hiking in the mountains is even more entincing and Garmisch- Partenkirchen calls loudly my name.

Until then, time to discover more from Munich and another praised destination in the area. To be continued...
Posted by Ilana WD at 5:15 AM