I must confess I do have a thing with industrial locations, factories and mines - a domain I know way too well as a consultant for various PR projects in the field of the mining industry. Looking at all those machines and industrial landscapes is nothing fancy about but the production system as such might tell an important story about the local civilization. As the ecological concerns are becoming an important part of the contemporary Western culture, many locations, some with a high pollution potential, where turned into natural parks, like in the case of this former rail yard in Schöneberg turned into a natural park.

This time, I am out in a place near Berlin, to explore a limestone mine and processing complex, that provided the construction materials for famous locations such as the Brandenburg Gate, Sanssouci Palace or the Olympia Stadium: The Museumpark Rüdersdorf. 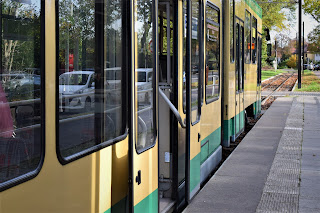 Arriving there is a little funny adventure in itself. From the S-Bahn Friedrichshagen in the Northern part of Berlin one takes a vintage tram for around 15 stops (aproximatively 23 minutes). Additional C area ticket is required. 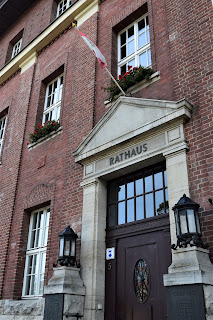 We randomly stop somewhere in the middle of the village, curious to see if there is anything else to see in this Rüdersdorf bei Berlin. For instance, the city hall, used as an administrative building since 1968, a former sanatorium and lazaret. 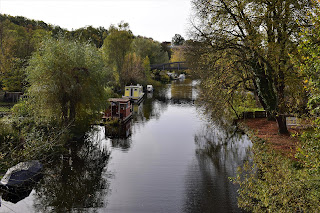 Although there are some colourful views over water channels framed by autumn foliage, I couldn't find anything noticeable to keep me away from the Museumpark Rüdersdorf, the place where I will spend all my time in this little village. 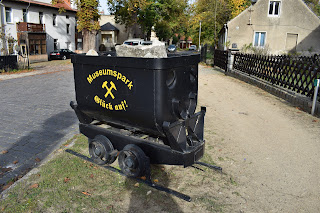 If you are arriving by tram from Berlin, the station closest to the Museumpark is Heinizstraße, from where you just have to follow the directions until the entrance. The basic entrance costs 6 Euro, with the possibility of booking special historical or geological - searching for fossils is a recommended activity here - tours that high-up the price to an average of 15 euro. The program varies up to the seasons as follows: April to October, daily from 10.00 to 18.00, and November to March, from Tuesday to Sunday from 10.30 to 16.00. 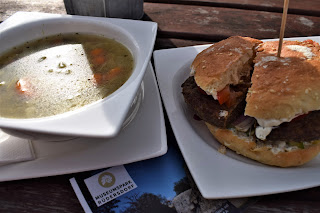 First time first, we are hungry and we make a generous stop at the small restaurant strategically located near the entrance. We are announced that there is no fried oil involved in the preparation of meals - no French fries, for instance. The hot veggie soup is bringing back all the good travel energies, while the burger builds up the proteins - wish the bread is a bit fresh tough. The prices probably takes into account that it's probably the only place around where you can eat. 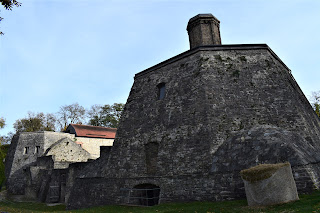 Time to stop complaining about the economic challenges of German restaurant and start exploring instead! At the first sight, the location looks like an abandoned complex of castles and fortifications. In fact, every part of this park is a witness of the advanced technologies applied for the extraction of the shell limestone (Muskelkalk). Usually, those materials are hidden a couple of hundreds meters below ground. In the case of Rüdersdorf bei Berlin, an unique case in the geological context of this part of Germanny, the limestone is very close to the surface.

Tunnels and channels connected with the limestone quarry were created during the mandate of the Mining minister Anton von Heinitz (whose name is given to the street where the Museumpark is located), at the beginning of the 19th century. 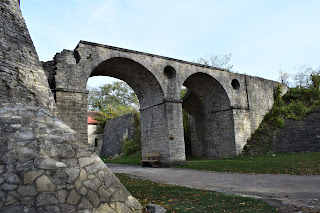 Aqueducts like massive constructions are magnifying the architectural landscape, whose overwhelming impression is tempered only by the expansive nature. 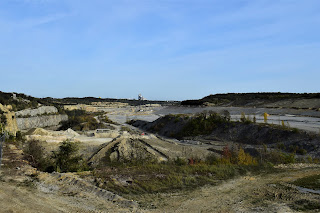 I've visited a couple of interesting mining locations in the last years, mostly in Europe, and there is always a feeling of desolation while facing the geological view left behind after years of intensive exploatation. 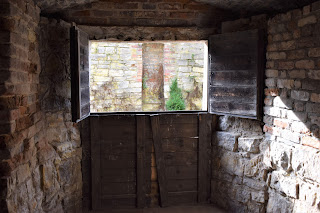 Inside the tunnels, we are having a glimpse on the various stages of the production system. 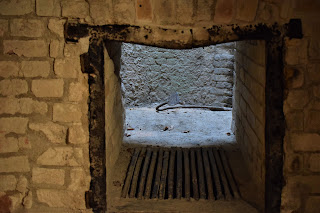 Here, at the very beginning of the 19th century, the first Rumfort kilns, a completely new type of pit furnaces were introduced. What is specific about those pits is that they have individual chambers for the limestone and the fuels, run permanently, a clear sign of the industrialization of lime processing, at a time when the demand for lime was extremely high in Berlin, given the constant expansion of the city. 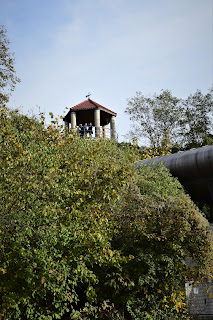 There are a couple of panorama points that can offer an overview of the park area, but for me, Glochenturm Panorama is one of the best. 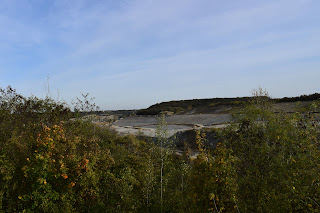 Situated on the top of a small hill, you can see the exploatation area from above. It still looks as desolate as it looks from the ground though. 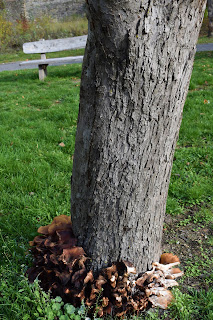 After being out of intensive use for decades, the natural balance was reestablished it seems, as the huge mushrooms - typical apparitions for the Brandenburg area - are taking over the tree base. 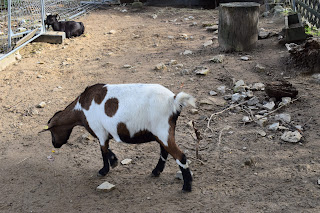 If you visit the Museumpark Rüdersdorf with children, there are a couple of entertainment activities for the little ones. There is a small petting zoo where you can feed the sturdy goats, two playgrounds and a lot of climbing opportunities. For those at the teen age, you can rent go-karts, e-bikes, bikes or canoes.

And it is even more: there are event locations that can be rented. Since the beginning of the 20th century, the limestone quarries were a popular background for the German film industry. It continues to be so, as here were also filmed sceneries from the Inglorious Basterds or the local German productions Terra X and Wanderhure. 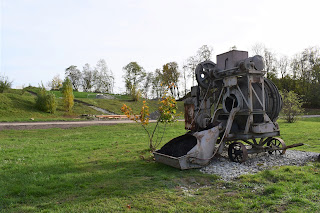 Remants of the former production system are left in the middle of the fields, like outdoor sculptures of modern art. Kids might be tempted to climb on while adults can be curious to touch various parts figuring out - when the detailed information files are not provided - what those machines were used for. 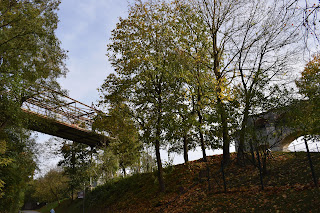 Even not necessarily interested about industry stories, a walk around is a pleasant way to spend a sunny day - we've been there for around four hours. If it's raining, you better don't visit as there are not too many places where you can hide, unless you go for a Land Rover tour. For those keen for walking - as I do - normalsport shoes will make the steps counting for the day pleasant. 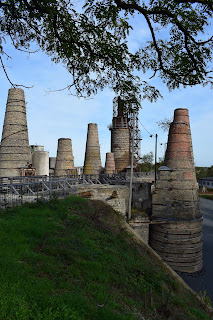 Imagine you have no idea where you are, what those conycal structures are used for. How would you describe this view? 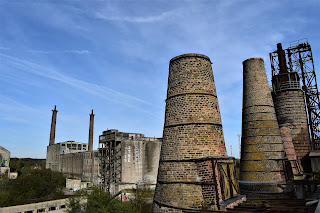 Temples of the industrial life, maybe, testimonies of a time when the industrial revolution gave so many hopes and offered so many chances for a better future of the humanity. 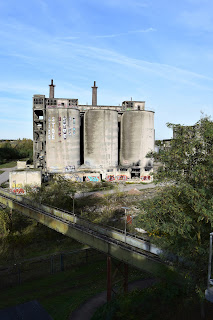 The abandonned concrete monsters are deserted now. Graffiti scribbling - nothing outstanding about the street art here - include them automatically in the category of 'quirky', without joining though many of those abandoned places that fascinated the visitors of Germany, especially of Berlin for such a long time, like Teufelsberg or Beelitz. 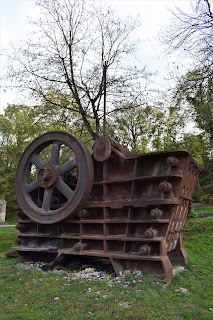 And there is even more to nurture your reflections on modern art and its efforts to give a special symbolism to average human - including industrial - activities. 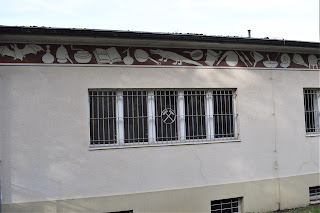 Personally, I wish there is there a small museum at least, where I can get more insights about the production experiences and eventually a movie or live presentation of the different stages of the limestone extraction. As for now, there are audio-guides available at entrance where one can get the right context of the locations visited. Maybe I'm too nerdy and curious. 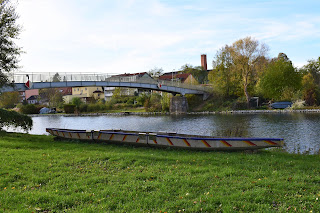 17 hectares of park later, we are leaving Rüdersdorf bei Berlin energized by the nature walking but with also some new knowledge about industrial architecture - my favorite German architect Schinkel contributed to some of the constructions as well - but also about ways in which old industries can be kept into the public memory.
This Museumpark was an interesting beginning to explore more similar locations in Germany and as I'm writing this, I am already doing a bit of research for my future industrially-themed travel plans.
Posted by Ilana WD at 2:47 AM