With a history that starts as early as the 12th century and famous for its Baumkuchen - spit cakes - Salzwedel was recommended to me as a destination to visit if I want to know more about the Hanseatic cities. Two hours away from Berlin, but much closer to Lüneburg and Hamburg, Salzwedel welcomed me on a grey morning. Me, I was ready to discover it step-by-step, regardless of the weather. 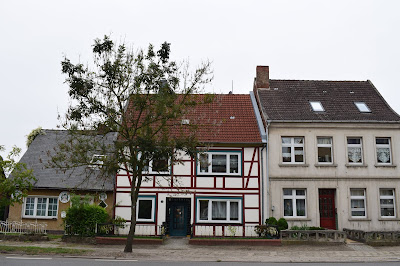 The first impression was not that great at all. The train station is surrounded by abandoned buildings - like the former Bahnhof Hotel - and not so friendly neighborhood. The Baumkuchen production is advertised from the very beginning, on the top of an ugly brownish water tower, so at least it was the promise of some sweet rewards if the rest of the trip would not be that successful. Taking a side street, my impressions started to change, at the sight of timbered houses. Maybe there is more to see I said to myself while walking the Hoyersburgerstrasse. 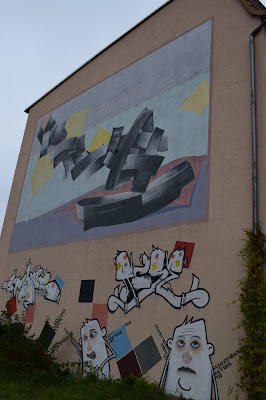 There is even some street art here, an incentive to continue the discovery of this city with a better state of mind. 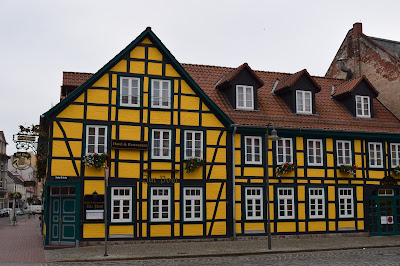 Once I am back on the way to the city center - around 15 minutes of fast walking from the train station -, starting with the 14th century old Lüchower Tower more appealing views revealed. Definitely, this once rich city, due to its inclusion on the salt - Salz means salt in German - road, a high commodity from the Middle Ages on, has a lot to offer. 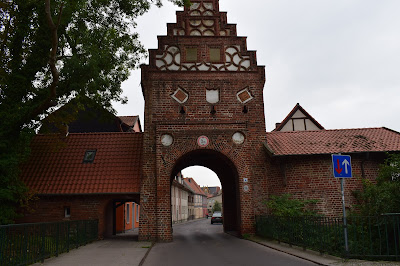 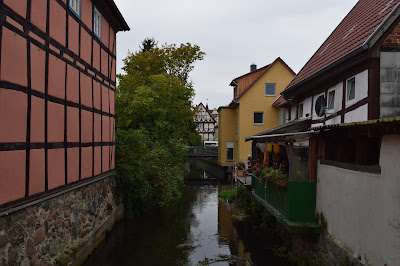 What is even more spectacular is the laguna-like appearance with houses raising from the middle of the waters, surrounded by green vegetation or other timbered houses. Small bridges are connecting the houses to the ground or just two separate sides of the street. 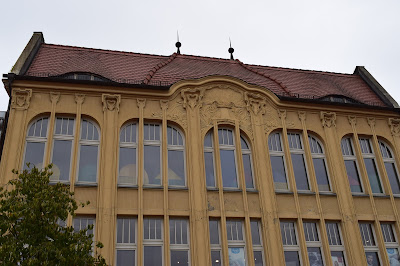 Besides the well-preserved late Middle Ages architecture, there are also some Art Nouveau traces, left especially on the big buildings in the city, many of them either public institutions or big stores. It seems that every couple of streets I am about to discover something spectacular about Salzwedel. 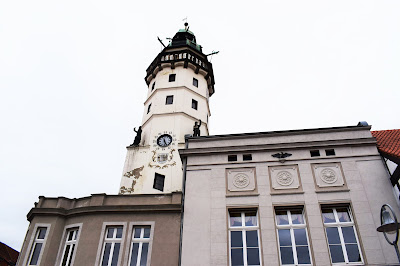 Some more interesting views are revealed while walking the Breitestrasse, Neuperverstrasse - with its many Asian stores - or at the Marktplatz, the central square, where both youngsters and retired people gather to relax in the middle of the day or to sip a cup of coffee at one of the many coffee houses around. For more shopping, the most important shops can be found on Burgstrasse. 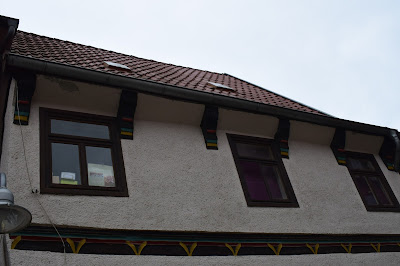 Some of the colourful wooden details of the houses remind me of the beautiful Celle that I visited a couple of years ago. 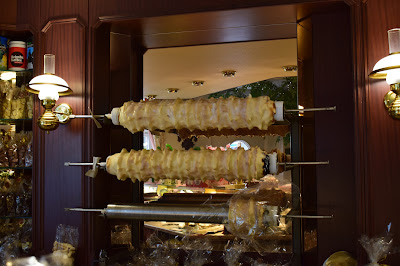 Time for some investigation into the famous Baumkuchen. Cafe Kruse was recommended by everyone as the best place to have the taste of the 'original' spit cake, and they even offer some tour - for 1 euro, including for toddlers - where you can watch various stages of the cake development. It is a small place with 3 small rooms with big windows walls for the curious. The preparation of the cake as such lasts many hours. The batter - made of butter, eggs, sugar and vanilla - is smoothly rotated on the spit on the fire. The next layer of batter is added only after the previous one dried. After the cake is fully baked and coated, marmalade and jam can be aded, and then chocolate - white or black.
I also had the chance to taste some cake samples and all of them were mouth watering, the dough slightly noticeable in the coating. Originally created in Bavaria - Bayern - for weddings, it spread all over Germany and Central Europe - there is a Hungarian version that I remember too, also aimed to serve the guests at the wedding - but also in Japan, where it is called baumukuhen.
I am sure that more than one place besides Cafe Kruse can offer the same and even tastier Baumkuchen, and even a friendlier ambiance - like Hennig, for instance -, but this time I was the victim of the a touristic trap. 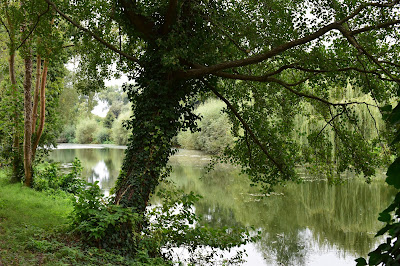 After cakes and city walking, nothing compares with the solitary path of a park. Burggarten has a luxuriant wild vegetation, with silent ducks floating on the lake. 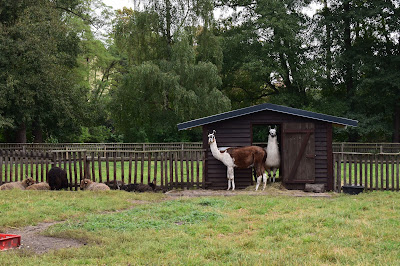 Nearby, a small farm - the Tierpark - with various local and exotic animals - from goats and horses to alpacas and peacocks, is the best destination for family with small children. It can be visited for free. 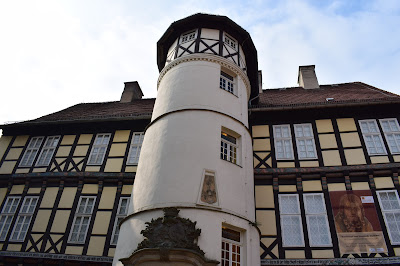 Back to the city life, I am spending more time admiring various styles and timbered houses. Hosted in one of the historical buildings, Johann Friedrich Danneil Museum - named after a German historian who lived here - offers an overview of the local art history. 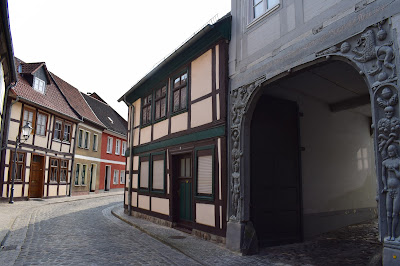 The more I go off the beaten path, the more beautiful corners I discovered, like this Adam and Chava wooden door frame, on Predigerstrasse, originally from 1534. 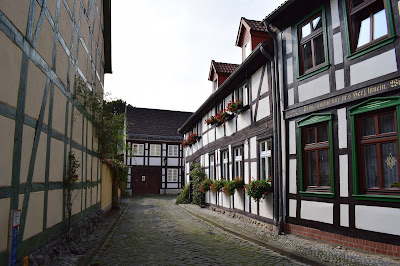 There are even secret cobblestone mews with houses whose windows are framed by green vegetation. It is the middle of the day and not too many people on the street, the photographer's beautiful dream! 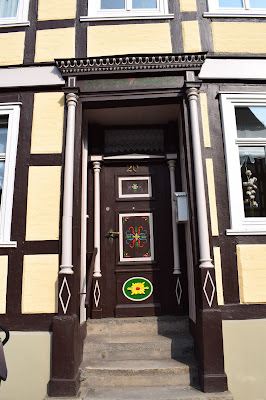 As in many parts of Germany, the beautifully decorated doors are not only a distinction mark of the house, but also a decorative addition to the street. 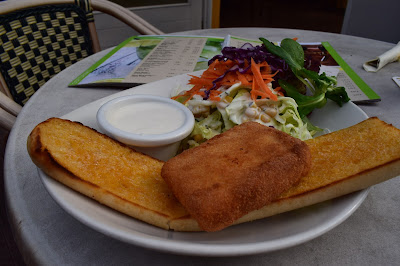 I was too busy to discover as much as possible from the city that I almost forgot about lunch. Without too much time left, I order a fast meal at Amadeus, which looks quite commonly cheap, but my meal - baked goat cheese with salad - is pretty tasty and the service is super friendly and fast.
On the way back to the train station, I am trying to summarize the conclusion of my trip: as in many cases, I decided to go to an almost unknown destination, not only for the expats, but including my German friends. The result: I've discovered a lot of historical and architectural corners, plus had the chance to taste some special cake. As usual when it comes to my German travels, I am in a win-win situation.
Posted by Ilana WD at 1:34 AM