A Weekend Walk around Mariendorf

As I spend most of my outdoors time in the popular areas of Berlin, there is little time left for discovering more about the rest of the city. In Mitte, Kreuzberg, Prenzlauer Berg or Charlottenburg and Wilmersdorf I have the best restaurants, museums and shopping destinations, therefore why should I adventure further more, outside my comfort zone? But living in the comfort zone is relatively unknown to me, therefore, I often enjoy taking a break from my usual walking routes and offering myself an adventure on the road less traveled.
This time, it happened in the area around Mariendorf, a former village with a history which starts in the 14 century, which went through a dramatic demographic development only in the second half of the 19th century. During the Cold War, it used to be part of the American sector, and was usually out of the touristic radar of the big city until now. This detail even was enough for spending one full Sunday afternoon there. 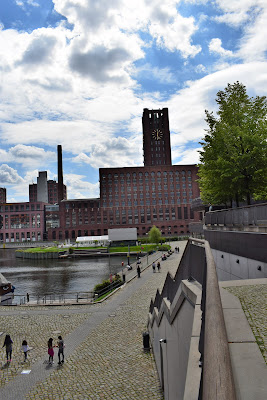 I started my walk at Ullsteinstraße U-Bahn station, on the U6 metro line. The red-bricked Ullstein building was from its construction, in the 1920s, in a special German Expressionism architecture style, until 1957, Germany's highest building. The headquarters of the famous edition house Ullstein, it hosts an array of institutions and leisure destinations, among which the German Press Museum and the Amber Suite club. 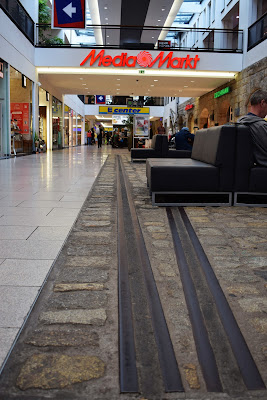 The architecture around tries to suit the massive red-bricked building, with an array of constructions which look like futuristic blocks. Before, the entire area around Tempelhofer Damm was just a small port used for trade and storing goods brought to Germany. Layers of the former buildings were integrated into the modern constructions erected lately, such as the Tempelhofer Hafen Shopping Center. For instance, the small pieces of pavements and rails used for carrying tons of goods, mostly by horse-drawn carriages. 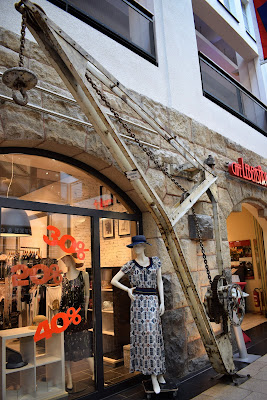 Or the hand crane in the front of the fashion stores, a remnant of hard work facing the world of leisure. 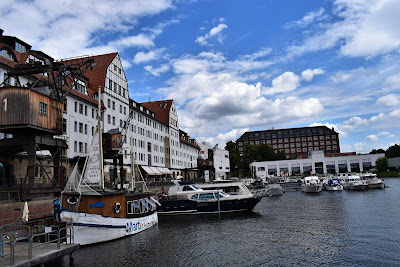 But it is one of the few summer days and I want to soak myself as much as possible into the warm rays of light. The small port used nowadays mostly for agreement boats looks lovely under the sun and the many coffee places open only for the summer are an invitation to 'dolce far niente'. 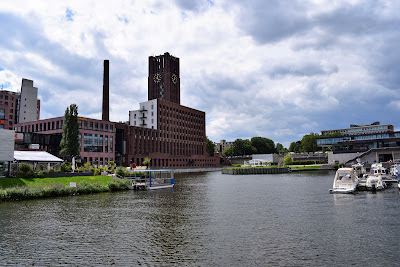 There are even some interesting options for children, such as a 3D Minigolf and a Kinderland playground. 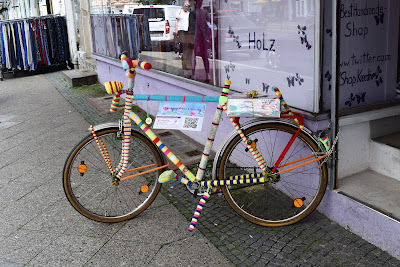 Right now, I am more curious to discover more from this area, which is so close from the former popular Tempelhof airport, but without any tourist or traveler in sight. The trip continues with some walking alongside Tempelhoferdamm, populated with many cheap stores, but with some patches of colour in the front of small boutiques too. 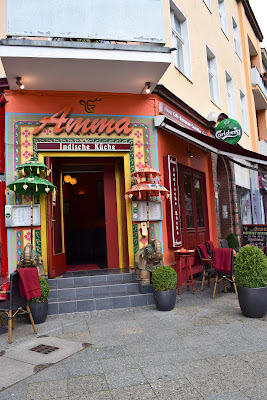 The foodie offer is overwhelming, as it seems that every ground level is hosting a restaurant or fast-food. The affordable Turkish restaurants alternate with some colourful Indian and Asian ones. 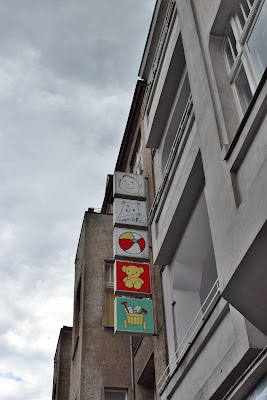 The impression over architecture is not so good, as the majority of buildings are in the grey unattractive style of the end of the 1960s-1970s. However, some funny discoveries like this children drawings can make a significant visual difference. 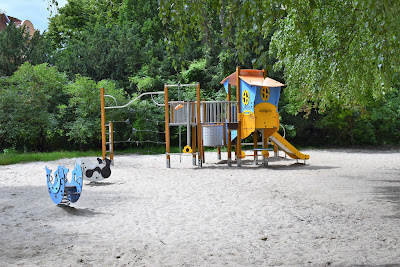 I give up to the temptation of taking a street completely unknown, just because I am curious and I know that sometimes there is a reward. At the end of the Friedrich-Karl Straße, a relatively uneventful street with many building renovations under way, an empty big playground is an invitation to move and play a little bit around. 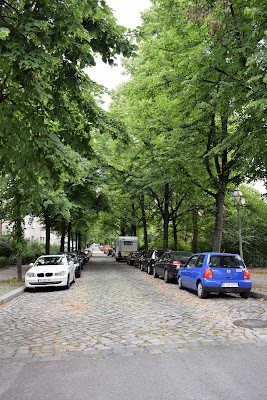 The side streets usually look covered in green, with wild green trees making a green bridge from the both sides. 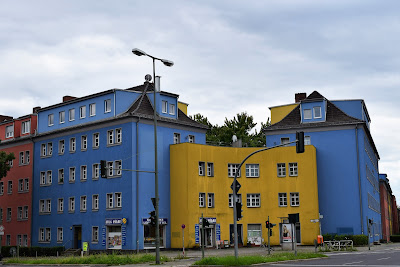 After so much green and even much gray buildings, the colours on Attilaplatz wakes me up. The architectural volumes are probably aimed to shake your visual habits too. 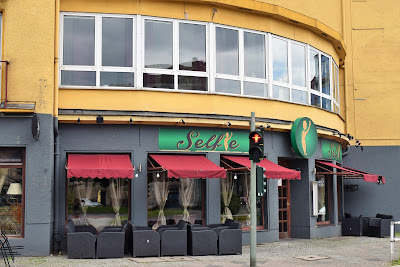 Taking about visual habits, maybe you want to have a stop and a selfie at the Selfie bar. Why not? 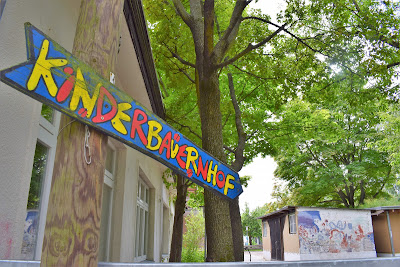 However, despite some small discoveries, I am a bit disappointed as it seems there is nothing too interesting happening around. Even the store at the Manufaktur Fassbender&Rausch, the one who produces the amazing work of chocolate art in Gendarmenmarkt is closed since April. When almost all the hopes were lost, I see a colourful arrow recommending a children farm. Which is closed for the time being, but once step further and I am at the ufa fabrik, a former film studio aimed to be demolished in the 1970s, creatively turned into an international cultural center. 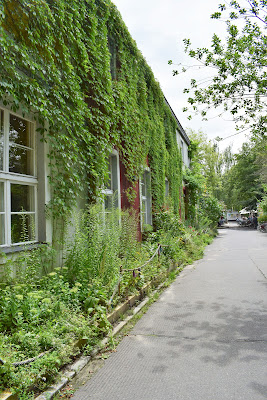 Covering an impressivev 18,566 square meters of land, it offers a variety of activities, from ecological pilot projects, to social networking for people of all ages and backgrounds, mostly organised in the many coffee places around the area. 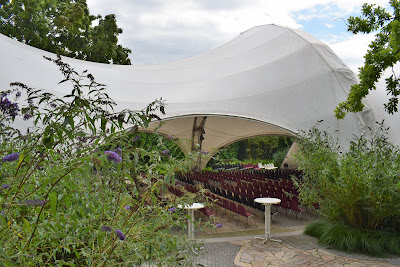 Concerts are also part of the daily activities, especially in the summer, taking place in a futuristically covered outdoors hall. 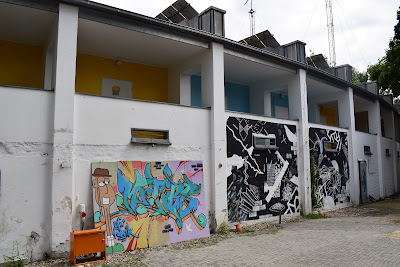 There is also a modest street art corner, the only creative area I've seen during my all walk around Mariendorf this time. 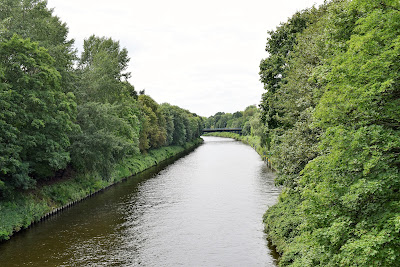 The green view is soothing for the eyes and an encouragement to explore more. For a couple of seconds, the view from Stubenrauch Bridge make me feel I am somewhere outside the city life, hiking in the wilderness. 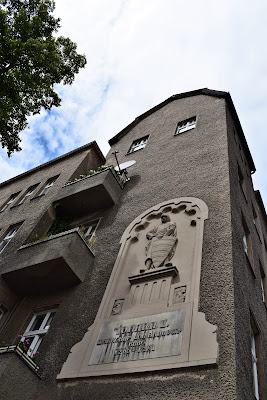 My eyes are on the hunt of unusual and special corners on Mariendorferdamm, and once in a while my searches are rewarded as in the case of this wall statue of a Prussian warrior. 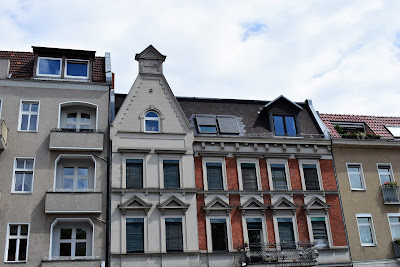 I can even see some curious architecture games, along the same Mariendorferdamm street, where the display of cheap stores, slot machines and fast foods continues. 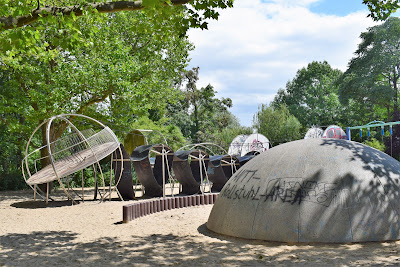 There is another park, with some curious playground machines, where children can waste their energies as much as they want. 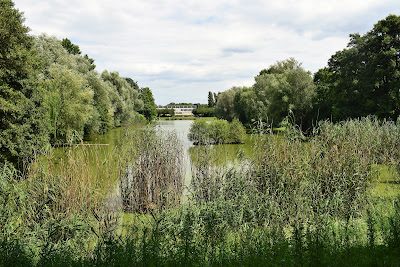 The rest of the park looks 'normal', with lanes for jogging, benches and even some courageous swans daring to go out of the lake to break bread with the locals. 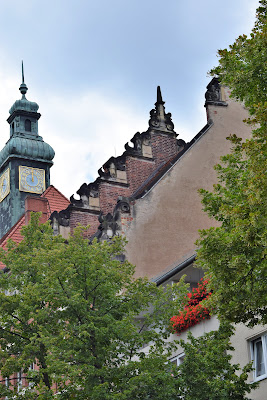 Up in the skies, on Friedenstraße, some stylish roof edges of a school institution that I couldn't resist to not photograph, are the diversion to the agerage gray building around. 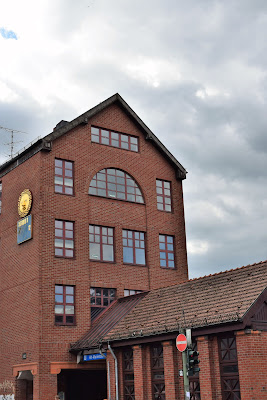 When it is time to leave from the 1960s style of metro station at Alt-Mariendorf, on my way to my usual fancy travel places, I can count few of my blessings of visiting such an under the radar but otherwise normal to live in neighbourhood. Until the end of the summer, I promise myself to be on a mission to keep discovering more than that.
Posted by Ilana WD at 1:24 AM