Since I've documented my article about the Most Beautiful Metro Stations of Berlin I wanted to return to a part of Berlin I did not have any idea about but which charmed me with the most colourful and elaborated decorations. One of the last weekends, I took my best walking shoes and my camera and started a long walking expedition into the (almost) unknown. 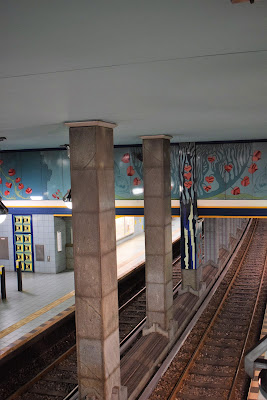 My adventure started at Lindauer Allee metro station, on the U8 line, direction Wittenau. As usual, I couldn't resist to have a look from the above and admire the colourful trees and geometrical shapes bringing colour and good mood to the otherwise boring waiting time for your next train. 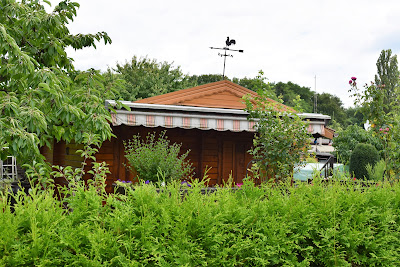 A couple of steps away from the metro station, the colourful garden colony of Pflanzerheim was getting back to life, with windows being slowly opened and gardens started of being cleaned and watered. 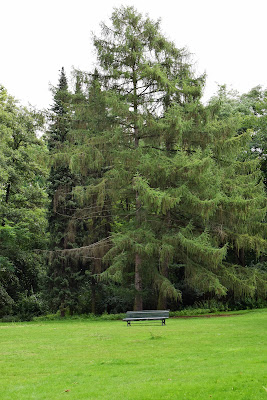 Charmed by the manicured gardens of the colony we not even realized that we are far into a wild wood, such a quiet walk although the green-bordered avenues are often crossed by dogs and bikes on their quiet morning walks. 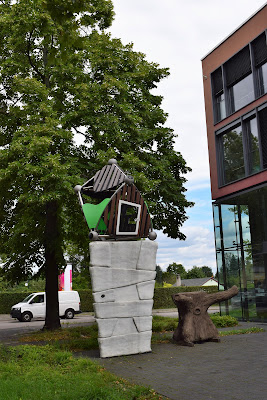 Half an hour of walk later, we landed on the Roedernallee and a different and completely unknown page in the history of Reinickendorf is being opened. Here are the headquarters of Berliner Seilfabrik, a local brand producing equipments for playgrounds. 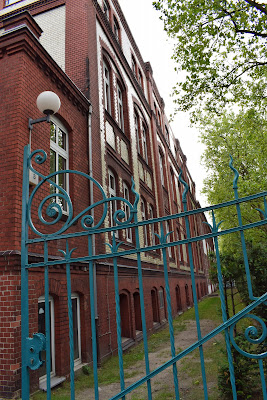 A couple of meters away, a red-bricked building hosts a company producing since 1981 fasteners for the automotive industry. 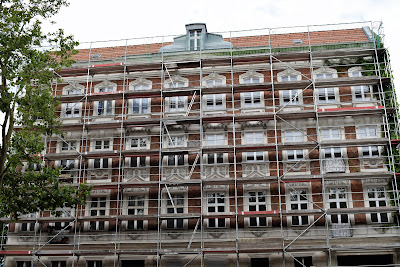 The alley has plenty of average foodie options, the usual variants of Turkish and Asian fast-foods, but also a couple of beer open air locals. As in many other quarters of Berlin, the intensive renovation works of the building announce some coming suprises for the local real estate market. 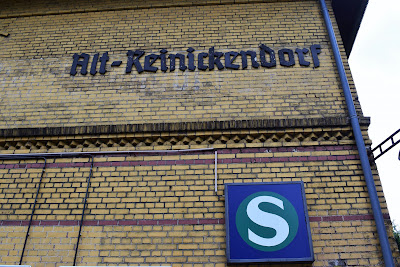 The more we walk the more we are getting closer to the historical chore of Alt Reinickendorf. Part of the city of Berlin since the end of the 14th century, it was named for the peasant Reinhardt (Reineke in a German dialect), who first settled here in the first half of the 13rd century. Situated in the Nortwestern part of the city, it went through dramatic transformations starting with the 19th century, once the industrialization process began. The train station - nowadays S-Bahn - built at the end of the 19th century, created important connection from this part of the city to other Eastern areas of Germany. 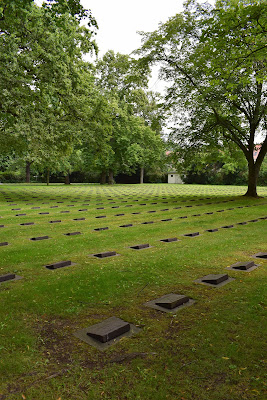 Near the train station, one can walk to the local War Cemetery, dedicated to victims of the WWII, among which known and unknown soldiers from Italy, Netherlands, France, Russia, USA or Spain. 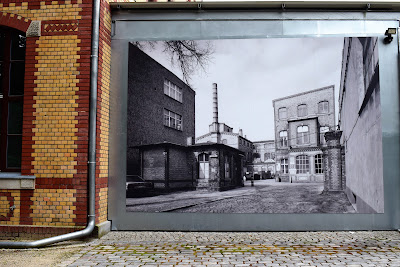 On a more positive note, history is present again at Industriehof, outlining another center where the engine of industrialization moved the city forward. 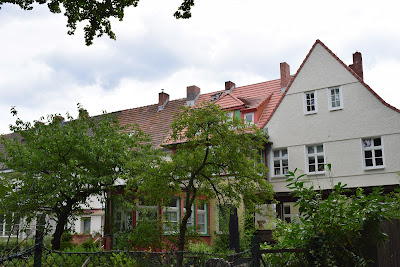 The small streets around Freiheitsweg offer a pleasure to the eyes, with the colourful, multi-storey houses surrounded by gardens and secret mews. For a moment, I completely forget where I am and the constrast with the grey constructions I noticed on the main street is noticeable. 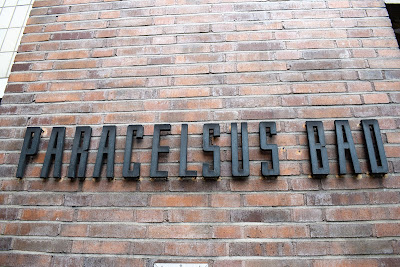 Back on the Roedernallee, we have a look at the famous Paracelsus Bad, the first built in Berlin after WWII, inaugurated in 1960. Since then, it permanently diversified the offer, being considered nowadays an attractive destination for swimming lovers in the Northern part of Germany. The complex also includes a sauna and beauty and hair parlours. 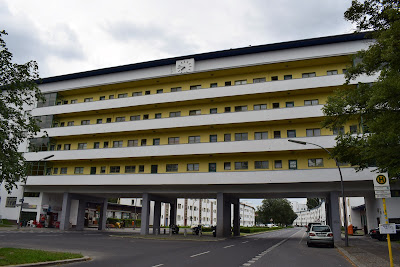 As often happens during my travels, my hunger for learning means that I might stumble upon unknown bites of information that keep surprising me. As for instance, the encounter with the Weiße Stadt (White City). Of course I know and love the White City in Tel Aviv, but finding another one in Reinickendorf was more than a pleasant surprise. The outstanding examples of a massive construction including 1,268 residential units are to be found on Aroser Allee (former Schillerpromenade), Emmentaller and Genferstraße. 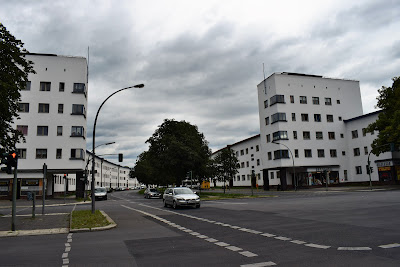 Built at the end of the 1920s according to the principles of the 'New Objectivity' architectural style, the 3-5 storey buildings were aimed to offer a complete housing experience to the residents, which similarly with the housing complex in Frohnau, were also served by 2 Kindergarten, a heating central, an apothecary and more than 20 shops, spread on an area with significant areas covered by gardens. 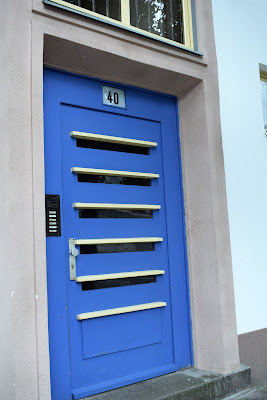 Part of the UNESCO World Heritage, alongside with Gropiusstadt, it offers the German architectural answer to the increasing housing needs of the 20th century. Everything looks very neat and well organised the inspiration for an equally clearly settled life. The charming blue doors were my favorite part of the area, bringing a joyous human feature into the strict white labyrinth of buildings. 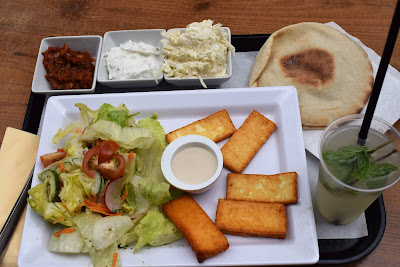 The ambiance on Residenzstraße is less organised and white clear, with cheap colourful stores and the Babbel of languages. At the foodie stop at Tamra Chicken I recharged my batteries put on trial for the long walking hours with a halloumi cheese plate, accompanied by delicious mezze and a fresh lemonade prepared in Middle Eastern style. 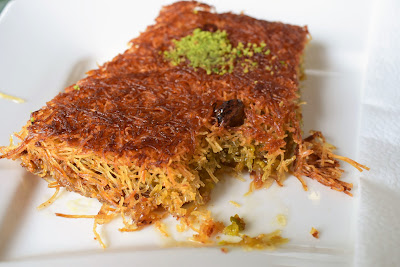 As the rain decided to pour shortly after my lunch was over, against my will, I have to make another stop - this time soaked in sugar, at La Femme, a family friendly restaurant part of a chain serving delicious breakfast and Oriental dishes spread all over Berlin. My kanafe was outrageously sweet, but pretty for the camera. 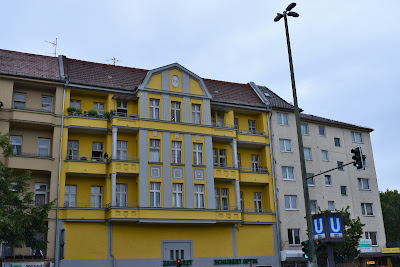 We reached the final leg of the journey, Franz Neumann metro station, but the trip is not over yet. 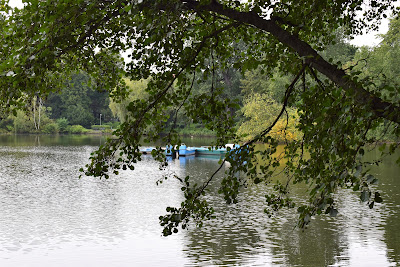 The next 45 minutes are well spent in the after-rain quietness walking around the Schäfersee, my thoughts interrupted only by the repeated noises of the huge airplanes overlooking the area coming and going from Tegel Airport. Around the lake there are many summer coffee places, as well as a mini-golf yard, but the most soothing view is of the quiet lake, with its lonely boats waiting to be driven. 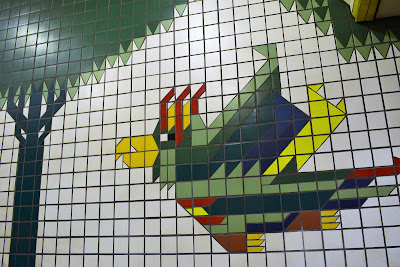 My walking adventure ended as scheduled at Franz Neumann, another colourful station on this metro line. True is that it took me a lot of time to come back to explore this area, but it just opened my appetite for more Berlin histories.
Right now, I should think about what's next on my Berlin mapping agenda.
Posted by Ilana WD at 12:11 PM