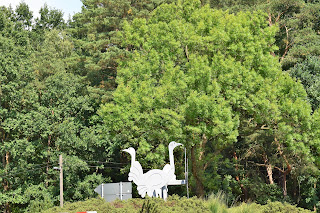 How the straus become the symbol of Strauberg, this relatively unknown part of Berlin which you rarely stop by on the way to best known places like Buckow, is not fully clear. Reacheable from Berlin Zoo station with the S5 S-Bahn line and the ABC ticket, Strausberg (b. Berlin to make the difference to the homonymous from Frankfurt/Oder) may be a pleasant and affordable destination if you are looking spending time in the middle of the nature. With part of it belonging to the picturesque Märkische Schweiz as well as to the equally picturesque Märkische Oderland, it has a lot of free time activities to keep you and your children busy for at least one full day. 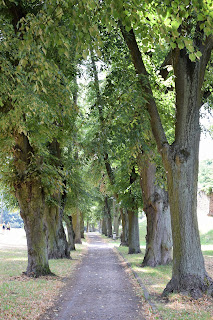 The journey lasts around one hour, passing near small villages that make you forget that you are still in the big capital city. Berlin and Strausberg are connected via train lines since 1948. Since the 18th century, Strausberg used to be a so-called garnison city (like Wünsdorf, another interesting destination near Berlin I will feature in one of my next posts) and remains until today one of the biggest German Army headquarters in Germany' East. What we see upon arrival though, besides the blocks of flats GDR-style, are alleys bordered by old trees, an invitation to thoughtful walks. 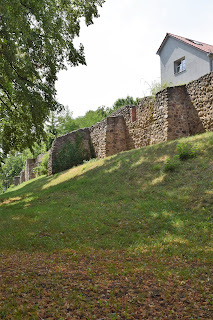 The old walls are not only well preserved, but integrated harmoniously into the contemporary landscape. It gives to some part of the city the air of a fairy tale with an urban background. 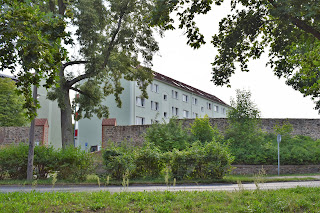 In some cases, the old walls were converted into entrances to the relatively new - in centuries' time - blocks of buildings. 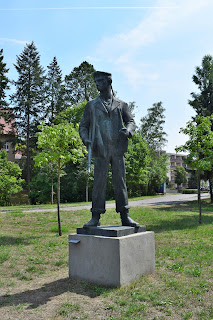 When I drove the first time through Strausberg on the way to Buckow, I noticed a group of visitors taking pictures in the front of a sailor statue. Apparently, this character, which reminds of the revolt of the Kiel sailors in 1918, in solidarity with the November Russian revolution is a local attraction, as people were this time also in the front of it for photo opportunities. The work belongs to Hans Kies, who also created the memorial art at Buchenwald camp, a personality - both political and artistic - among the GDR artists of the time. 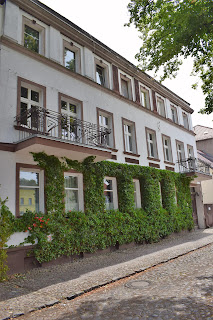 Although most of the city looks designed in the spirit of the late communist 1970s, there are still some old corners reminding of other times, especially on Bebelstraße. 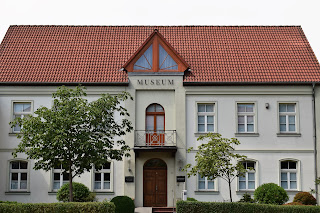 A couple of meters away on th same street, there is the local museum. The name of the street is not accidental, as here, in 1898, August Bebel held a conference and the street was named in the honor of the founder of the German social-democracy. 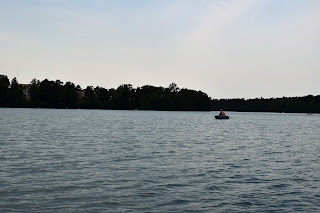 Although I love history and to discover historical episodes during my travels, summer for me is mostly made for exploring nature and hiking. Strausberg has plenty of it to offer, starting with a small boat tour for 1.50 Euro one way, crossing Straussee. 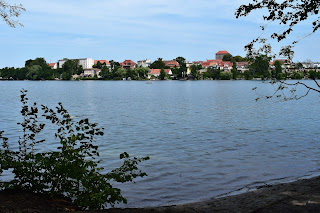 On the other side, you can make a round hiking near the lake, with views over the city. A very creative idea was to offer once in a while some short explanations about the buildings and areas visible from the other side of the lake. For instance, the electricity factory or the Fishermen' quarter. Learning through hiking was a really interesting idea and experience. 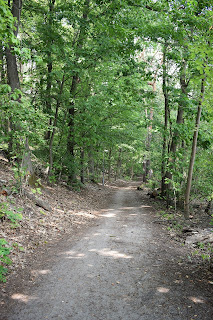 The trail is relatively easy and all you need is a good pair of shoes and the desire to keep walking. You can also bike, walk your dog and carry your baby in a pram. There is no limits to your desire to be in a good shape. 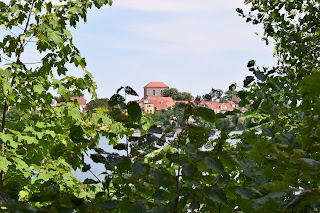 On the shores, people are sunbathing or picnicking, listening to music or just enjoying their own company. 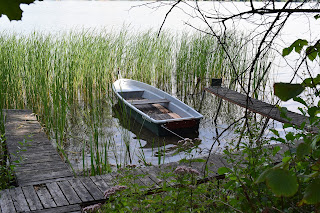 Some lucky ones do have boats that brings you fast in the middle of the lake, with views on both sides and the immensity of the water surrounding. 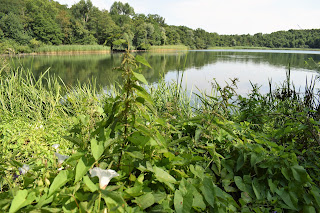 Hiking around the lake lasted around 2 hours of slow pace, but it built up a lot of positive energy and strength, not only in my muscles. 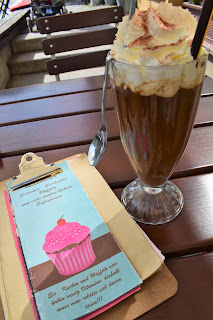 Time for a tasty reward: an ice coffee at the welcoming Milchbar, near the city hall, a place where besides various bio and natural treats you can also have breakfast from 9.30 to 14.00. The service was friendly too and they do have some great icecream sorts worth to try at least once. 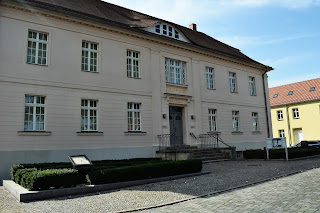 The city hall - Rathaus - building looks like a big mansion, elegant and with clean architecture lines. 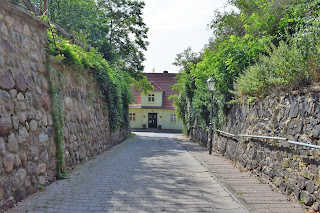 We want to explore a bit more, and we arrive again in an area surrounded by old city walls intertwined with the modern one-storey houses. 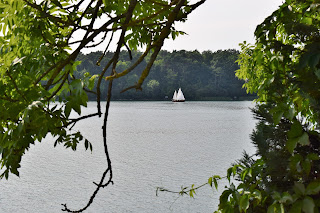 The views from the Panorama viewpoint are smoothing and postcard worth. 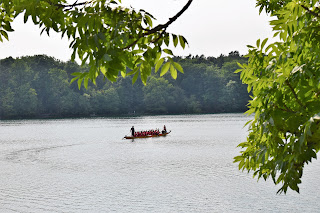 A couple of meters away, on the lake, there is a boat competition taking place, on the occasion of the Dragon festivities, a local benchmark in the list of summer events in the city. Besides, the Volkspark is turned into a great playground. 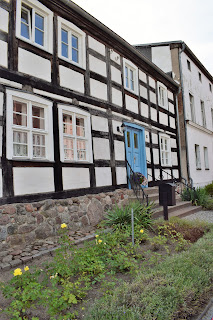 The most surprising parts of Strausberg though are on the sideroads less travelled: Kürtzestrasse has some lovely timbered-houses built on a strong stone foundation and with colourful small doors that look simply lovely. 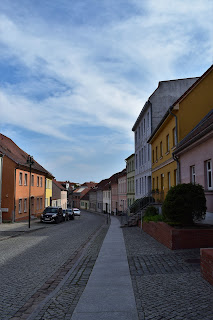 This part of the old city is by far my favorite and I slow my pace to admire one and every single one of the beautiful colourful houses. 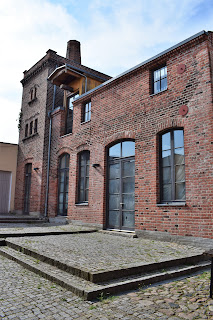 In a short amount of time I am on Großstraße, the avenue where most shops are concentrated, many of them offering products, especially fashion-wise which remind of old, unfashionable times. In one small interior yard, there is the Alter Brauhof, a reminder of the glorious brewery times of Strausberg. In the Middle Ages there used to be at least 60 breweries, not few of them around the Dominican monastery. Following the 30 Years War (1618-1648) most of them were destroyed and 1880 marks historically the end of the local beer production. The building reminds as a historical memory, that can be admired from the white covered tables of the Italian restaurant nearby, apparently Strausberg's best foodie destination.
Nearby, the Lindenplatz was quietly empty, but locals say that on Tuesdays, when the weekly market takes place, there is a completely, lively ambiance. 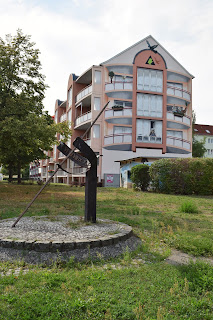 With its new and old part of the city, its beautiful nature and calming view of the lakes, Strausberg was a really pleasant travel surprise. Most probably, when I will be around the next time, I would prefer to stop and see more of it instead of just crossing it in a big hurry, lured by other unknown more appealing destinations.
Posted by Ilana WD at 12:59 AM