Caught between the noisy Olympia Stadium - especially when there is a soccer match going on, as yesterday - Spandau and Gatow, Pichelsdorf is one of those place you rather transit through than you stop. Without museums and any noteworthy restaurants or monuments, you rarely find it mentioned by the everyday Berliners, unless they are (lucky enough) to live there. But I believe in the charm of every single part of Western Berlin, and I am not afraid of the thread of boredom. I am rarely getting bored in this city - and during any of my travels in general - therefore I decided to spend a full Sunday afternoon exploring this part of the city. 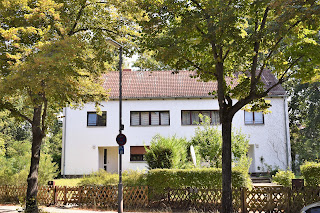 Once we are coming out of the 1911-built SBahn Pichelsberg station, all we can see are small one-storey houses surrounded by green yards and huge old trees. This is the predominant architectural style of this villa-residential area.
Close-by, there is the so-called Britishen Siedlung on Kiplingweg, a couple of dozen of houses close to the then British Hospital and the British School - which nowadays is a private English-speaking school. Finished in 1958, by the team of architects Rudolf Ullrich, Alfred Gellhorn and Leo Lottermoser, it was aimed to answer the accommodation needs of the representants of the British Establishment living in this part of the city. Although the constructions look more or less all the same, what distinguishes a residence from the other is the choice of plants and size of the gardens, with the whole area looking almost like an enormous garden. 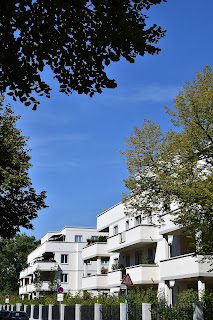 New blocks of flats are taking over parts of Pichelsberg too, but in a way which keeps in line with - at least - the average height of the surrounding buildings, although all of them are looking like copy-pasted Tetris blocks. 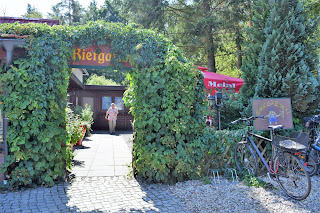 When you are not having a garden party or an outdoor lunch in your home garden, you can find some small places where to spend your time and money: some small beer gardens or some Italian restaurants. Nothing fancy, minimal comfort and an usual menu, and good prices too. 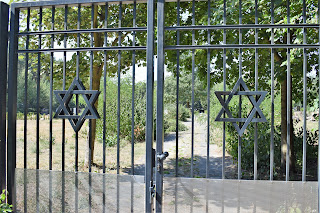 On a side street from the very long Heerstraße, it is situated since 1955 the Jewish Cemetery. It was created after the access to Weißensee - Europe's largest cemetery - was blocked following the division of the city. Here are burried personalities like the iconic Heinz Galinski, the leader of the post-War Jewish community in Berlin between 1949 and 1992, the chief cantor Estrongo Nechama and the representatives of the West Berlin Jewish families established in the city in the last decades. 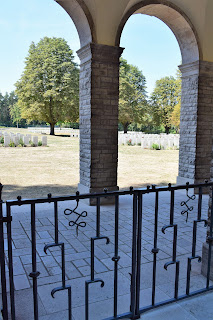 A couple of meters away, on Heerstraße, there is another cemetery: War British Cemetery, one of the three Commonwealth War Centers in or near Berlin. Designed by Philip Hepworth, the principal architect for WWII Commonwealth War Cemeteries and Memorials in N Europe. Around 80% of those burried here - a total of 3,600 burrials - belong to the Royal Air Forces (RAF) Bomber Command. A number of 278 burrials are after the war. It is my second time here and I feel overwhelmed by the general feeling of stillness. No one around, only the thousands of replicated small white stones. 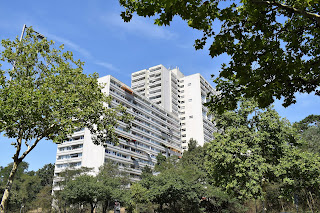 Out on Heerstraße, the high buildings erected between 1968 and 1970 in order to accommodate the new needs of the West Berliners sprung from the tall trees. 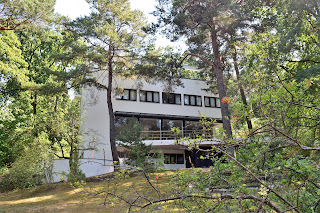 But the predominant architectural style of the area favors white, one- maximujm 2-storey family houses. Am Rupenhorn displays a couple of examples of architecture from the 1920s. One of the most famous is the building on no. 25 whose interior can be also visited by requests sent at least 2 days in advance. 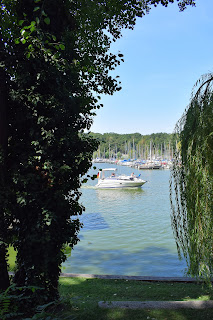 Nature is inviting every tourn of the street and like the rabbit from Alice in Wonderland, invites to follow unbeaten path. As the entire area is on a small hill - berg means mountain in German, but in this case the term is slightly overrated - you can easily go up and down through small forests to reach small lake oasis or even to go as far as Grunewald - which is around 4 km. away. We are for the lake today, and the small port Am Pichelsee makes me forget for a second that I am only in an obscure part of Berlin and not in Monaco or who knows other glamorous place in this world. 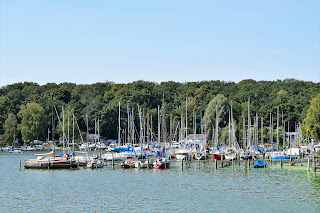 You can easily rent a boat for a couple of hours or a day, if you are not lucky enough to have your own. On the street sides, glued on a tree, small anouncements on pieces of paper - the usual marketing Berlin-style - are offering boats on sale for quite good prices. 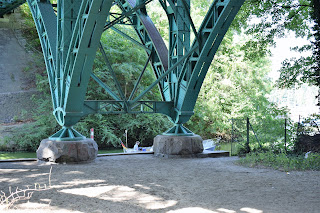 Under the massive metal feet of Stoßenseebrücke, both nature and boats and humans are grossly belittled. The association between nature and human work looks like a grotesque display of power. 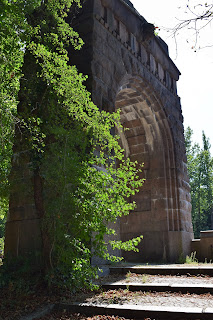 Remains of former gates of entrance to Berlin add a majestic decay to the landscape. This area can be read in so many ways, from the old times to the industrial revolution era! 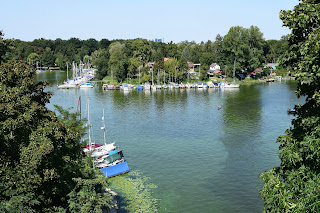 Times passed, the nature and their beautiful lakes stay always the same - maybe only a bit polluted by humans from time to time. 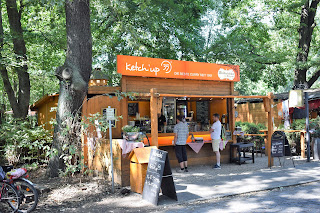 Time for a short snack, at a local fast-food establishment since 1961 - Ketch'up. The Frech fries are decent and the garden offers a pleasant oasis of freshness on a sunny day - plus live updates from the soccer championship! 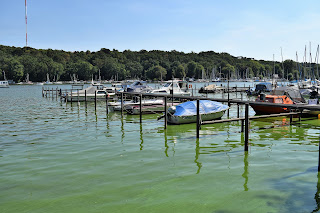 Down on Siemenswerderweg, a short stop at the small boats port. People are waiting in line to rent a boat, with bags fulls of bottles of beer on the side. Cheers for the neverending summer vibes in Berlin! 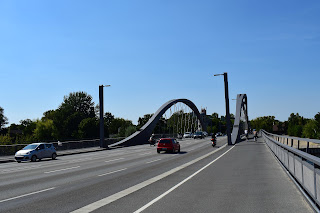 A couple of meters up, the Freybrücke, originally built in 1910 and reconstructed in 1950, brings you - on bike, at the wheel or pedestrian - near to Spandau. 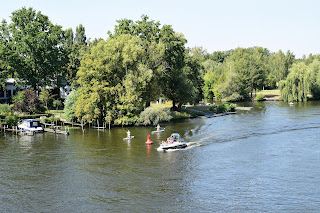 The sophisticated construction of the bridge is countered by the pre-modern view of the surrounding natural view on the lake, where people are stand-up paddling or enjoying the pristine environment. 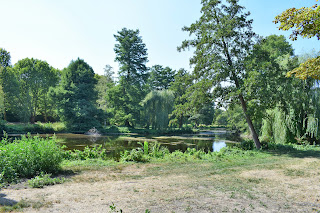 In Alt-Pichelsdorf, the enormous park is one of the most important highlight of an area where everything is small scale: the little shops, the Späti - small stores open round the day and night - the houses and their gardens.
As we are walking back the 2,5 km. alongside Heerstraße to the S-Bahn station, we stop for a little while more than once to breath a bit more this quiet feeling of slow life. The more I explore the West Berlin the more I realize that I would not be able to live anywhere else in this city.
Posted by Ilana WD at 1:48 AM