Berlin Off the Beaten Path: Why Visit Erkner? 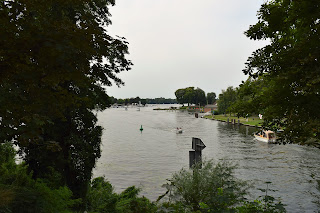 On my way back from Frankfurt/Oder, on the way by train to the Central Station we passed a colourful small harbour packed with colourful small boats. I had a short look at the name of the station - Erkner - which at the time didn't tell me anything. After giving the landscape a couple of more careful seconds from my time, I instantly included on the list of the 'places to visit' for a short getaway near Berlin: I spotted a lot of green areas, and the water and some interesting buildings too.
Back home, I've spent some time doing intensive research at the end of which I got even more reasons to visit this place soon: a spa place until the end of WWII, a literary destination for those interested in mapping the German Nobel prize winners as here Gerhard Hauptmann spent a couple of years, and also a little nature paradise.
You can easily arrive there using the ABC S-Bahn ticket from Zoo, with Erkner the final destination. 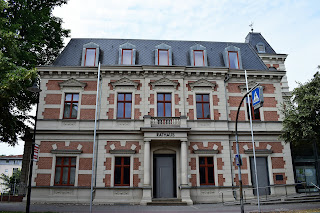 Although less than one hour away from Berlin, there is a certain countryside quiet mood which predominates, with couples strolling the main street and family with kids heading in groups to some nature walks. The cityhall, the former summer residence of the Gotha-born worldwide piano maker Carl Bechstein, smoothly integrates into the modest urban landscape. The park on the back of the cityhall, with a view over the Dämentzsee and Flockensee make it as a relaxing way to spend your Sunday afternoon. 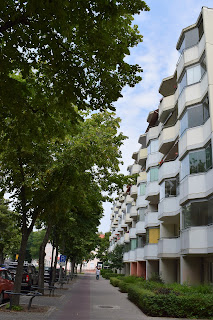 More interesting for me is the geometrical games shaped by the blocks of houses bordering the narrow main street. 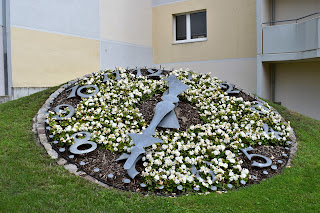 A mechanical flower clock keep it up with the time and the times, a bizarre combination between humble nature and human advanced technology. 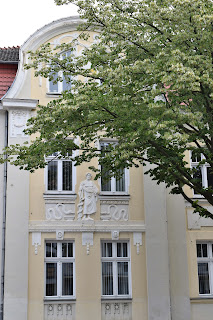 Newly painted Art Nouveau fassades give to the streets some touch of elegane and noblety. As a spa place, for its fresh air and high concentration of natural areas, Erkner was a holidays and relaxation spot. The architecture typical for spa centers can be still spotted once in a while if you have an eye for it. 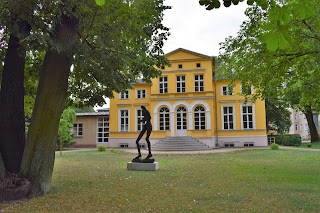 One of Erkner's famous residents is the 1912 Nobel prize winner Gerhard Hauptmann. He spent here only 4 years - between 1885 and 1889 - but was a reason enough to make him the VIP of the place. Alternatively, Erkner was also named Gerhard Hauptmann City, and a museum featuring his works and life is hosted in the elegant Villa Lassen. 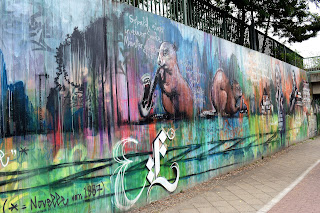 On Fürstenwaldestrasse, colourful murals featuring the life and nature of Erkner are a different way to introduce this city to Germany and the world. 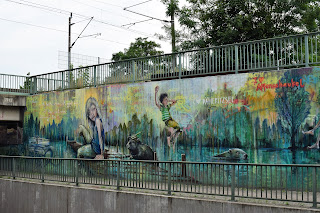 It may be a small place, but it has its own quiet lifestyle and local traditions. 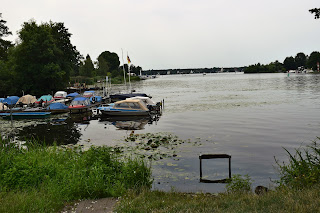 And its residents, more or less famous, might just call it a day when they can jump in their boats and make a tour around the lakes. 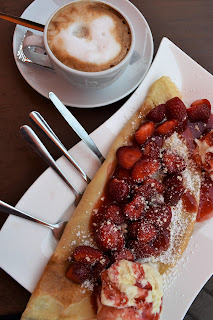 Before we are trying to see if possible to go on a boat tour, a healthy - or at least foodie - stop is required. At the Bürgerli you can meet on a Sunday with your friends, neighbours and every other visitors in Erkner like us. It is buzzing with life - and literally with bees - and the crepes covered in strawberyy jam and ice disappear from the plate in the blink of an eye. 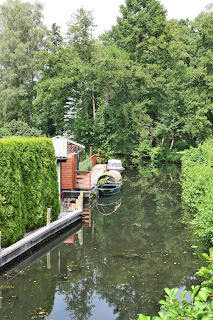 Arriving by boat to your office? Why not? In Erkner you can just step out your home and ride your bike - why not - as far as Berlin. 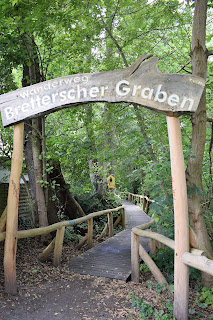 Not in the best physical shape after returning from Buckow, I am using this opportunity of some more action. The 1900-meter long Wanderweg zum Botterschen Gräben, a settlement created in the second half of the 18th century is the perfect spot. 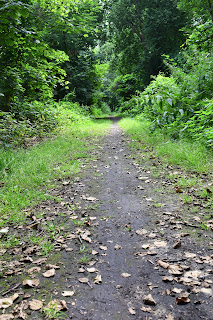 Easy to walk around, especially in comfy shoes, you may meet once in a while some locals walking their dogs or also, like you, looking for some nature battery boost. Bikes and solid baby prams are also welcomed. 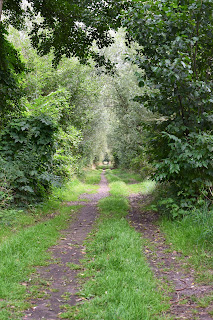 Embracing the silence, I am happy with the moment and the blessing of moving my feet on the way to the unknown paths. 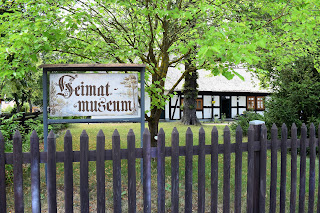 Hidden behind big green trees, a small countrymen house is hosting a local museum, featuring the story of Erkner, its traditions and personalities. At the Heimat Museum I discovered another local literary personality which spent some time here, the poet Helga M. Novak. 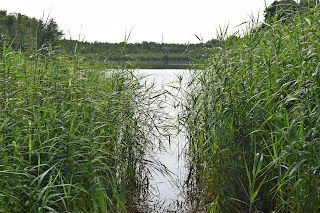 If you visit Erkner with children, besides the nature walking, there are also a couple of small parks where the little ones can use their energy climbing and jumping around. A former attraction, a petting farm - Bauernhof - was recently closed, although local directions still include it among the things to see here.
Hopefully, we have even more walking paths and lakes to discover. Near the former spa park, there are some easy paths to follows, or the Hohenbindener Weg, leading to am Karutzsee.  All quiet and neat, if not for a lady approaching every new coming people to tell them how everything is so dirty nowadays, compared to decades ago - in the GDR times, as Erkner was on the red side of the wall, as a monument to Soviet soldiers near the Hartmann Museum reminds.
As the trip is over, I am happy that I've decided to spent a lovely summer afternoon in a place rarely mentioned on the Berlin's To Do List. Not sure when will return, but at least we put on the map a simple green gem of this city that never ceases to amaze me. I bet I'm not the only one!