Eberswalde, besides the Zoo Adventures

My travels were very limited lately, as I've spent the last two months working hard to a couple of projects and exploring various business opportunities. The break is over now, and I am ready to continue my adventures of putting as many off the beaten path German destinations on the travel maps. 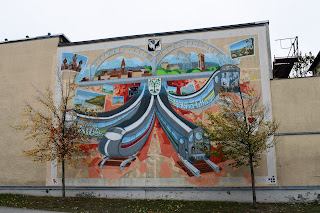 Eberswalde was often mentioned in the discussion with my friends with children, being recommended for its Zoo, an outdoors park hosting unique animals. One hour away from Berlin by train, with a 8.40 daily ticket - combined with the AB monthly card - its colourful murals made my curious to explore even more. 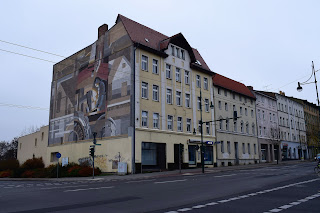 Alongside Eisenbahnstraße, former industrial residences display a modest glamour which hardly reminds the times when Eberswalde was an important industrial center in this part of Germany. 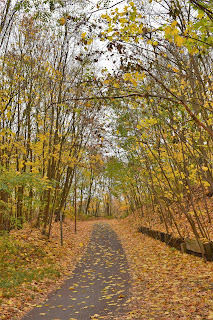 Nowadays, former factories are hidden behind forests dressed in the golden-reddish shades of autumn. Many people, including some of those we shared the bikes' section with, are coming here for foraging which makes Eberswalde a perfect destination for nature lovers in Berlin looking for a fast fix. 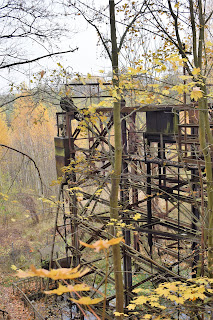 After a couple of meters of walking, we are faced with the remains of what used once to be the first Europe's horshoe nail factory to use machines for production. The former 25-ton wagon lift nowadays hidden under the trees was powered by a hydraulic system which would raise a railroad car in maximum 15 minutes. Those were the days! 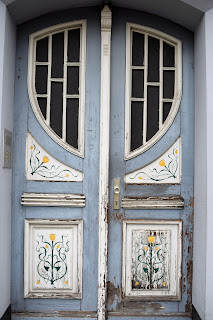 The wellbeing of the residents of Eberswalde, many coming here encouraged by the constant development of industrial facilities starting with the 17th century is reflected also in the details of some residential areas, with the beautiful colourful doors being probably a sign of social status. 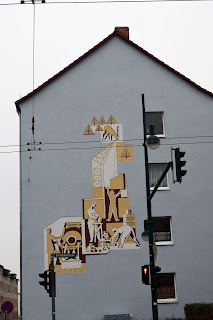 Eberswalde also went through the communist revolution, with displays of working class professions favored at the time, showed on the high walls of the blocks of flats 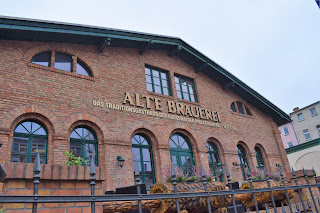 When there is so much work to do, you need to take a break once in a while. The Alte Brauerei - Old Brewery - is welcoming his guests with homemade beers since the late 19th century. Nowadays, there are some live music and dancing events hosted here too. Another local attraction which involves a bit of food is the Roh Kao, a chocolate factory which was unfortunatelly closed the day we visited. 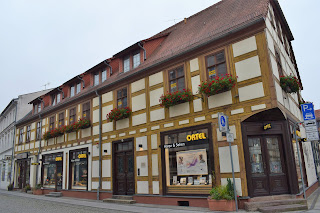 Which gave us more time to explore the colourful, newly renovated old quarter, with its timebred houses and one-storey buildings with red flowers on windowsills. 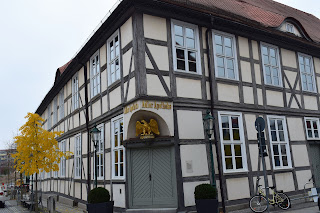 The autumn colours are matching pretty well the entire neighbourhood which with hardly someone out on the cobblestone streets looks very much out of our times. 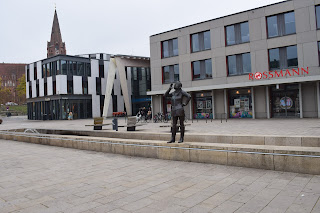 The main market square has a more modern vibe, with a modern architecture and plenty of eateries full of people. Part of the square has in its center a statue of what is introduced as a young lady, in her early 20s, with a screaming attitude. Art is always a matter of taste, after all. 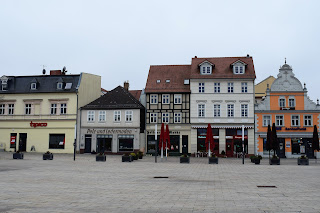 The other side of the square looks more entincing for me, with its mix of styles and colourful facades which remind me at a certain extent of Poznan. 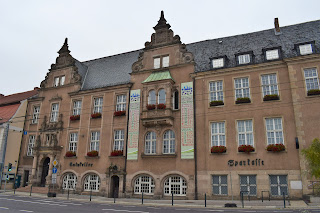 The city hall is by far one of the most stylish construction, with the elegant curves of the roof and its adorned balconies. It also displays an open message of tolerance and acceptance of the difference, which make it even more sympathetic to me. 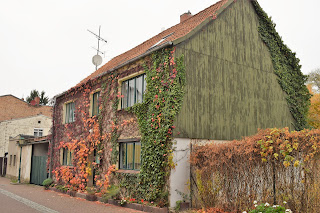 Luckily, we decided to travel in what looks like one of the last screams of the autumn, with only a couple of leaves still holding tight displaying an unique combination of natural colours. 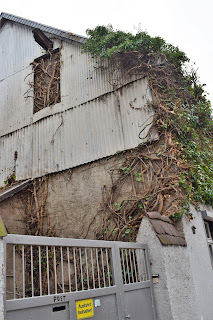 Nature is moderately allowed to stay in the urban landscape, with an interesting tree structure left alive under metal sheets covering an outer house wall. 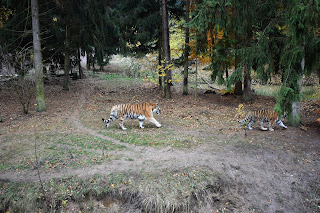 After we've seen so many interesting things already, the trip to the Zoo, by bus, from the central area, is no more the highlight of our trip. You can see animals freely roaming and playing, but after visiting many many Zoos all over Germany and the world I wasn't extremely impressed by what I've seen. However, if you want to offer an outdoors adventure to your active children, you may also find besides the animals some playgrounds and climbing areas that will catch the attention of the little ones. 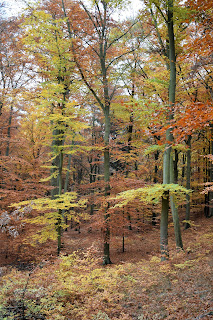 What I am really looking for right now is some autumn walking, not only for highering up my daily counting of steps. I've spent too many hours on a chair, indoors, in the last weeks, therefore I need some extra action. Slowly walking through the forest is one of the best medicine I ever had and the background is encouraging me to keep indulging in my walking habits. 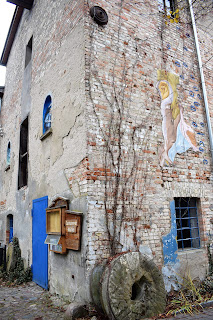 In the middle of a little slice of wilderness, a former mill was turned into an alternative cultural center, most probably the only one center of young creativity in Eberswalde, Zainhammer Mühle. 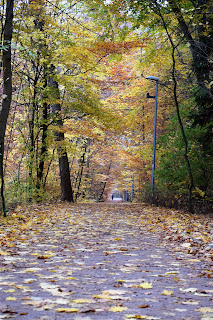 Accompanied by the autumn colours, I continue my walking meditation, joining many other locals, some of them together with their dogs, which are enjoying the outdoors walking outdoors. 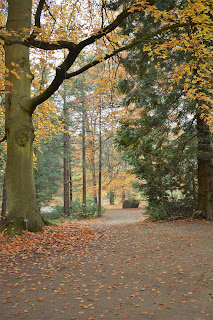 With so many green woods - after all, the name of the town includes the word 'wald', which means forest in German - no wonder that here there is also a big botanical gardens park - Forstbotanischer Garten, were I am spending another batch of calories. 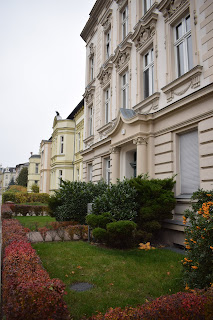 Back to the concrete world, it is very hard to figure out where I am, as I am passing a long row of manicured lawns and perfectly neat 1-2-story houses. Could it be London? 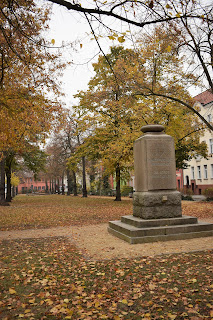 Karl Marx Platz with its empty park and the rememberance monuments to the WWII victims reminds me that I am in Germany though. As the evening is about to descend, the streets are becoming completely emptier. 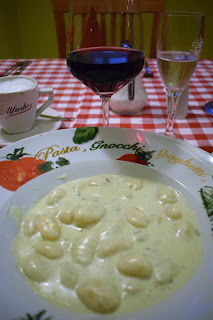 For us, it is time for lunch, at Il Castello, in the old city. A plate of homemade Gorgonzola accompanied by a healthy glass of Montepulciano Italian red wine fills-in the energy lost in hours of urban hiking. The food is fine, the local is children friendly and with a fast service so we are relatively fine with our choice. 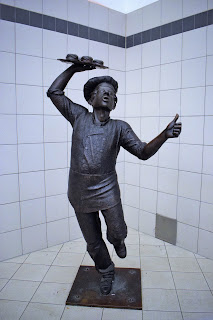 Our visit to Eberswalde is not over yet. In the train station, we learn something more about this place, besides its industrial past and zoo: here were created in 1832 the Spritzkuchen, a doughnut-looking glazed fried-pastry. It is one of my favorite sweet eats during this time of the year, and I am glad I've traced its history also.
It's so good to be back on the road and I can't wait to continue my adventures in the next weeks.
Posted by Ilana WD at 3:42 AM

Email ThisBlogThis!Share to TwitterShare to FacebookShare to Pinterest
Labels: autumn in germany, autumn places in germany, eberswalde zoo, germany tourism, one day trip from berlin, visit brandenburg, what to do eberswalde