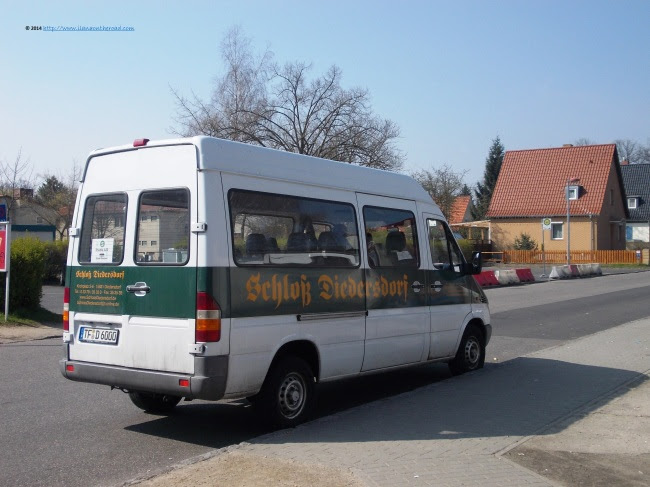 Summer is just around the corner, but spring in Berlin and Brandenburg is by far one of the most beautiful season. After long months of darkness and rain, the beautiful nature is waking up suddenly and shows itself in its full colourful beauty. Hard to resist the temptation of staying outdoors as much as possible, I take any opportunity for more discoveries. Enchanted by the promise of another full day of sun, we took the S-Bahn till Blankenfelde with a simple and clear direction: Diedersdorf Castle.
Close to the station, on Mozartweg a mini-bus was waiting. In exchange of 2 Euro one way, we were brought fast to the destination, although I would have rather prefer to walk as many other groups of visitors till the gates. Maybe on the way back... 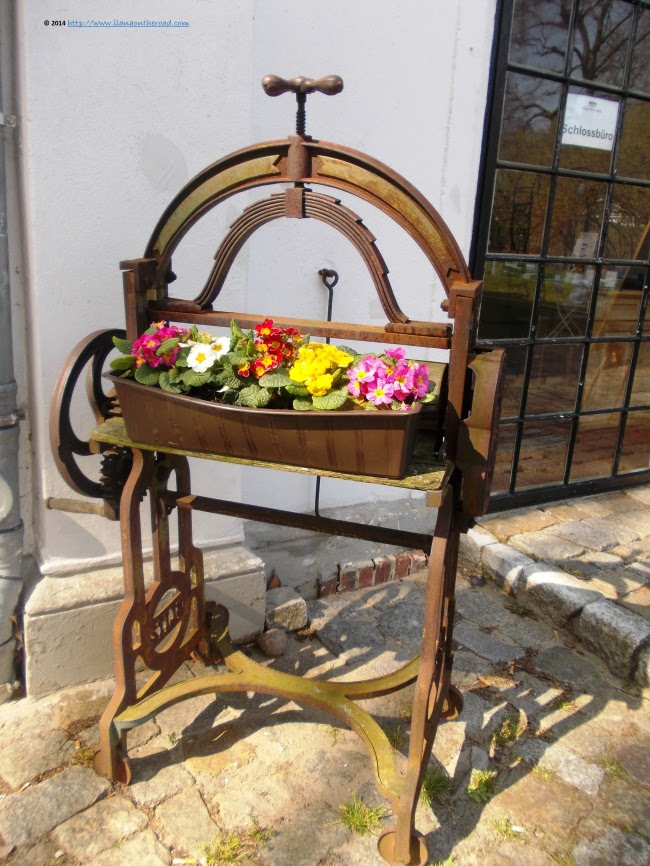 On the way, we noticed the quiet streets, that are getting more and more busy close to the gate to the castle. Most visitors seem to arrive by car, bikes or motorbikes. Although it is Sunday, many shops are open, offering only with souvenirs or sweet roasted almonds to buy as a snack to keep you company during a tour around the castle; there are also books, home design items and designed clothes. 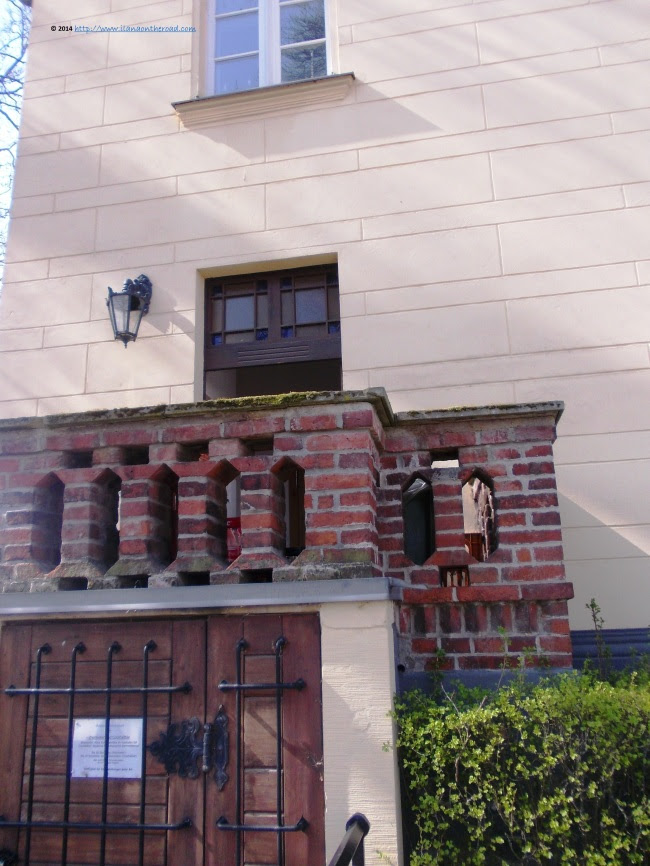 After a short look at the elegant lobby of the 200-year hotel, we go next  discovering the big yard, with shops, restaurants and other locations used for theatre or other cultural activities.  The castle was built in the mid-18th century and changed several times. The hotel has 8 big suites and a fitness place and it often chosen for elegant weddings or company parties, but also for fairs, one of them being fully dedicated to wedding planning. 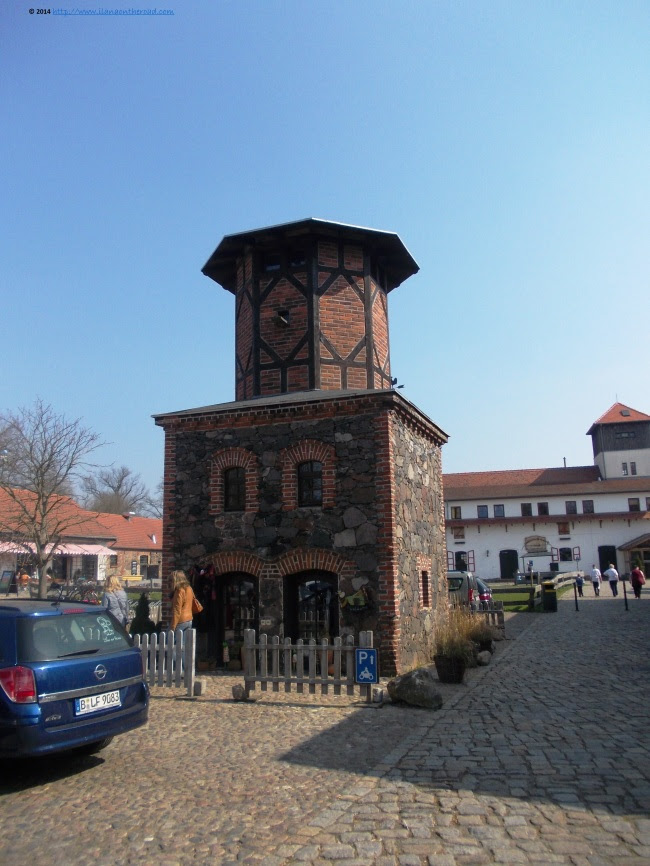 The darked old buildings were maintained in the middle of newest additions , but assigned new (often commercial) functions. People are coming and going, visiting the shops to buy or only to have a look. 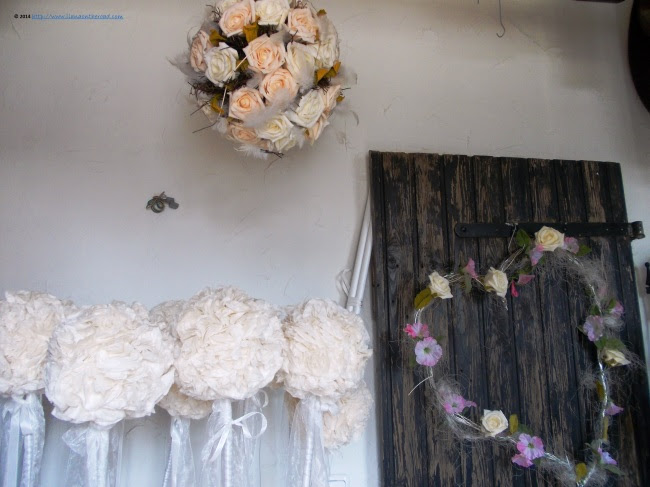 In a small room, bride bouquets and other lavish arrangements are prepared. From simple designs to complicated orders, nothing seems to be impossible for the skilled hands of the artisans working here. 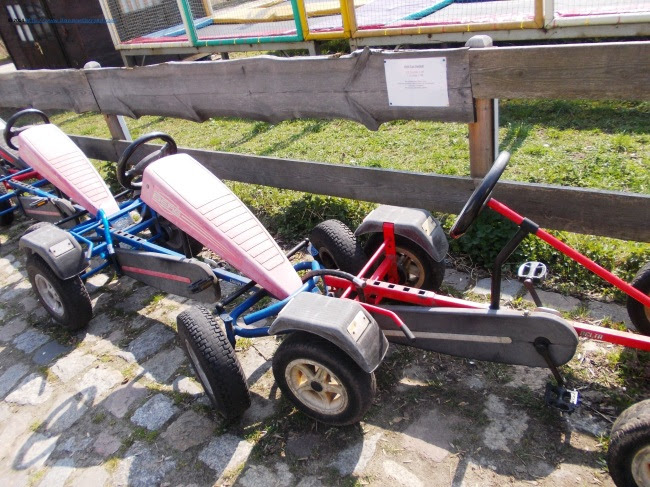 An important area of the main yard is dedicated to the children: a big indoor where birthday parties can be organized, a couple of big playground, with paid entrance, and also some tempting carts, that can be used starting with 3 Euro for 30 minutes. Alongside, the adults can play boules. 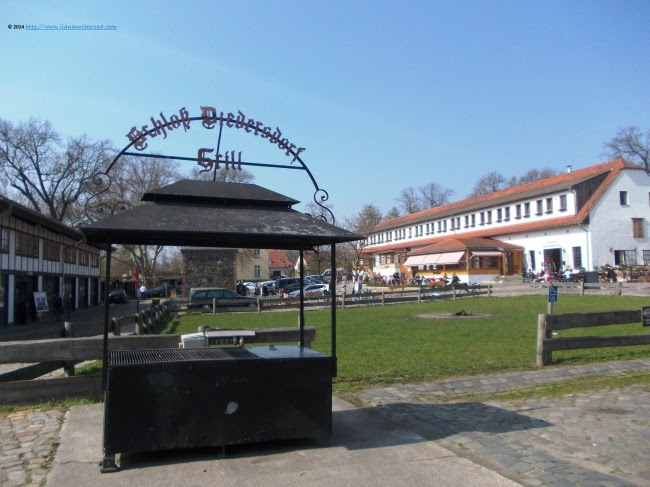 While the children are playing, their parents can enjoy a grill, but the season for such activities was not fully open yet. For the wine lovers, the cellar is hiding exquisite names, like Chateau Etang des Colombes, Rheinegau Riesling or Cotes du Rhone, for over 25 Euro the bottle. 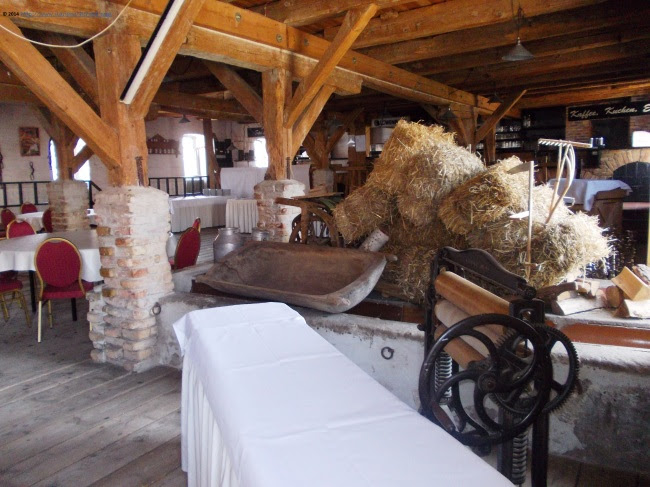 Meanwhile, we continue our tour of the main locations. A former cowshed was changed into a big hall mostly used for weddings where around 300 guests - 130 if seated - can be hosted. In order to keep the original feeling of the place, some old elements of the original space were kept. If you are non-conformist enough, why not celebrating the entrance into a new life in such an ambiance? 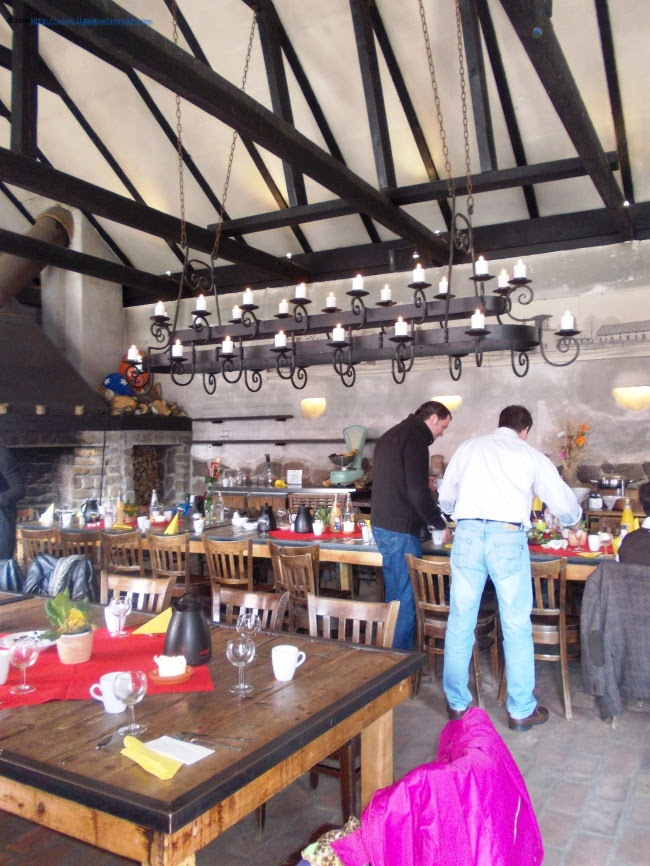 The lazy Sunday brunch can be taken in a former blacksmith. The bakery nearby is offering various sorts of bread and cookies that can be easily tasted outside for long hours. The famous asparagus is already introduced on the menu of the restaurant -  former horse shed - alongside with healthy potatoes dishes or a bowl of pear compote. 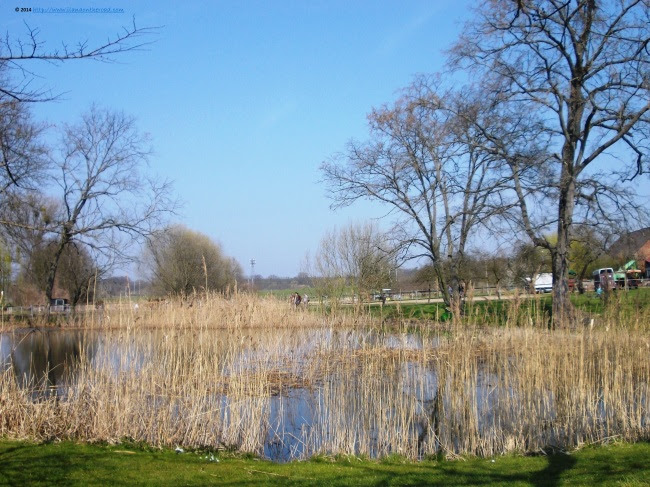 But not the food brought me here this time, but the perspective of spending a lot of time hiking quietly. We follow one of the hiking routes getting closer to more wild nature. 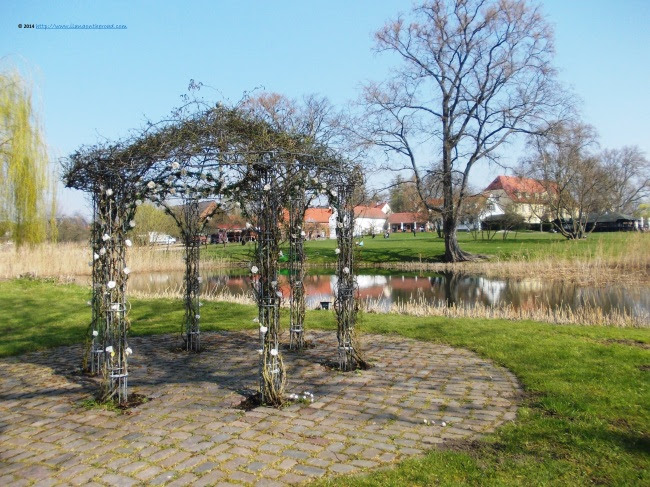 When the weather allows it, the weddings can be celebrated outdoors, in a quiet and green environment. Otherwise, you can spend the full day reading outside on a chaise-longue that can be rented for free. 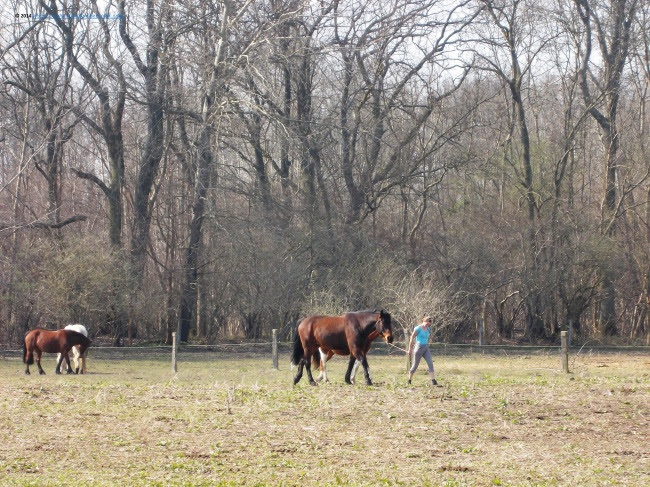 As we get far away from the 'civilized' areas, we meet my favourite animals: beautiful horses trained for slow rides. As we walk, we cross paths with happy children riding their ponies. A noble encounter between children and beautiful animals is a real lesson in life. 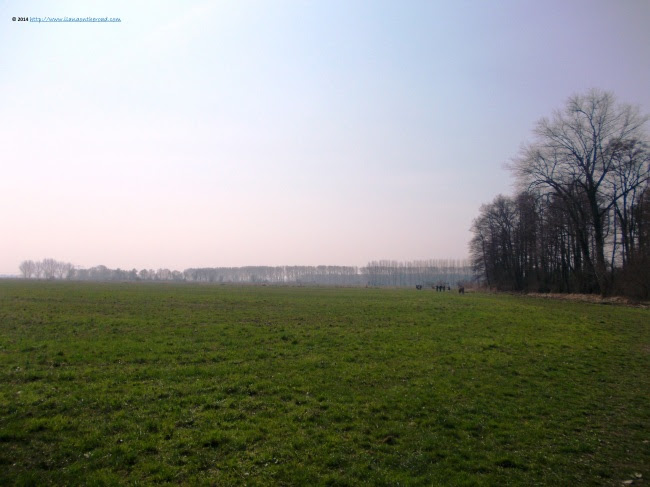 And we go further on, and the perspective changes even more. More beautiful green fields with rebel areas of trees at the horizon. 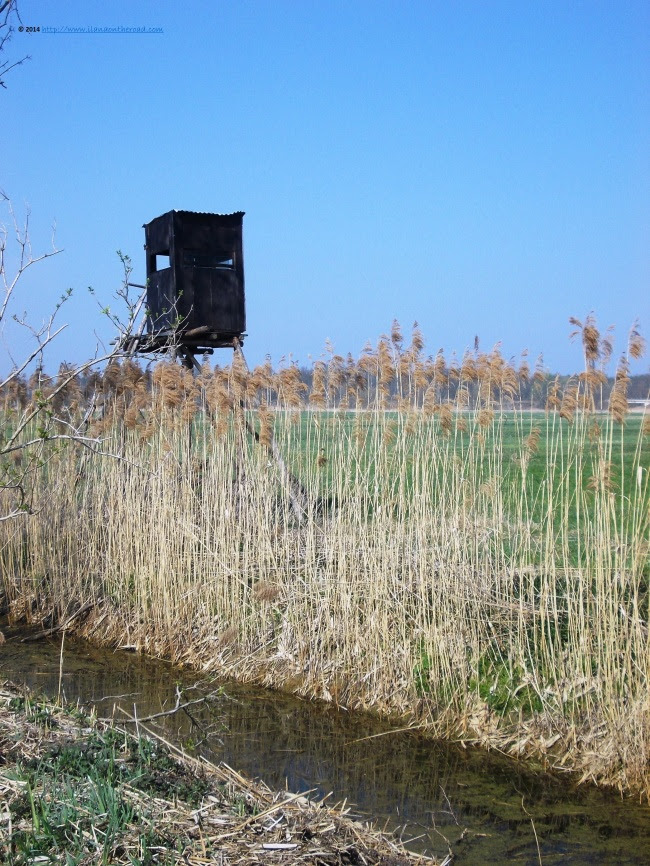 The wildlife observation standpoints warn the visitors that there might be a hidden life in the fields, but unfortunately we are not privy to any special meeting with representatives of the animal world. 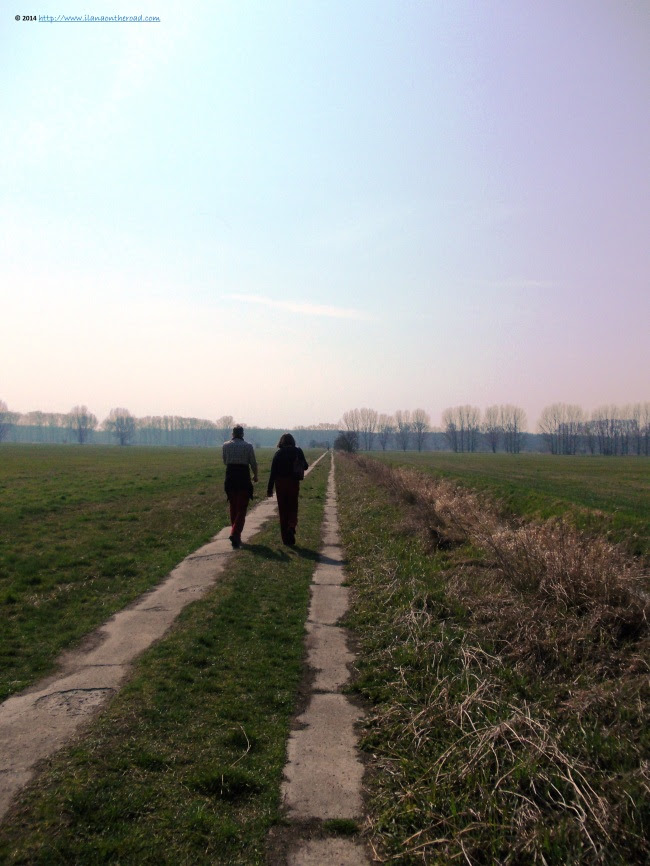 The hiking lane can be busy at times, with people of all ages some of them together with their bikes, many checking their tracking apps to see if they are on the right way. A complete tour of the area takes around 2 hours of slow walking and we are delighted to taste every single second of it. 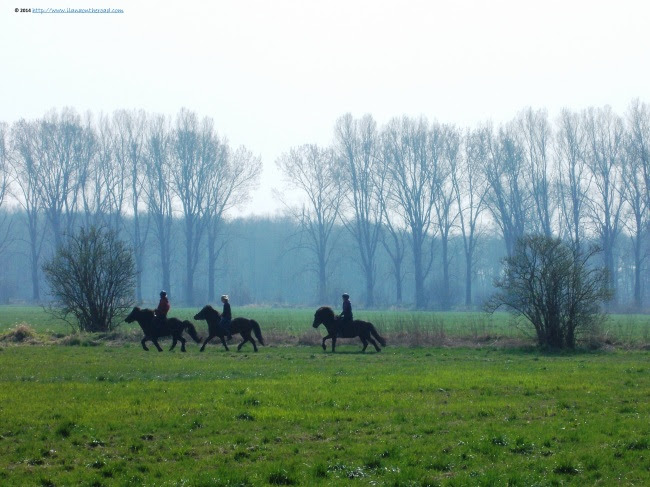 The majestic profiles of the riders brings a certain elegance to the wild nature around. And its prolongs the feeling of being surrounded by so much natural beauty. For those living a quiet urban life in the city, nature can inspire Romantic thoughts. However, for those living here, it means a lot of hard work and permanent preparations. The buzz of the machines wakes me up from the poetic reveries, bringing me back to the basis. 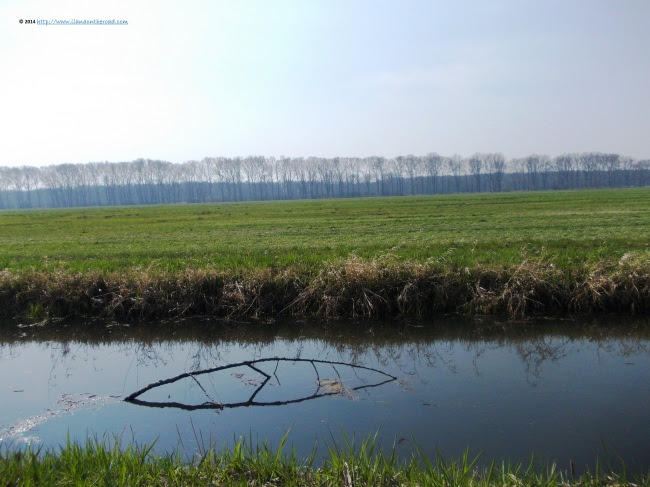 As the castle is situated close to Tegel airport, no wonder that the airplanes coming and going are permanently troubling the celestial silence of the nature. Far away, we spotted high speed trains, red dots disappearing instantly in the green. But there are also perfect moment of quietness when, as in life, you should be ready to enjoy the lack of unexpected occurences. 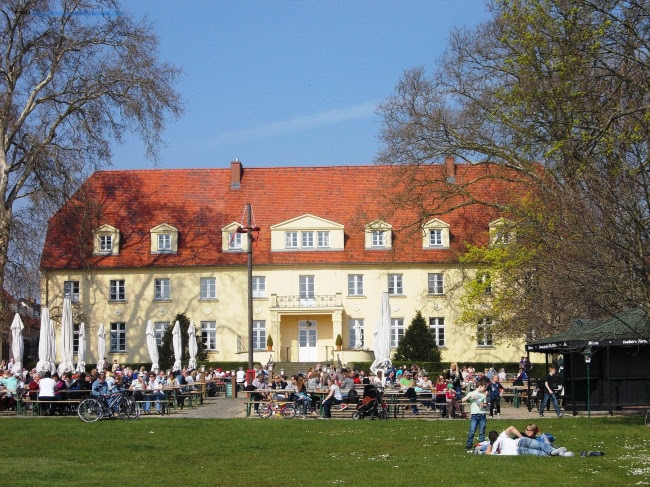 We are back to the castle again. The beer garden where Oktoberfest celebrations are held is getting busier, but some prefer to lay on the grass instead with or without the pick-nick baskets. Traditional bretzels and beers are tasted on the long tables and instant friendships are made easier. 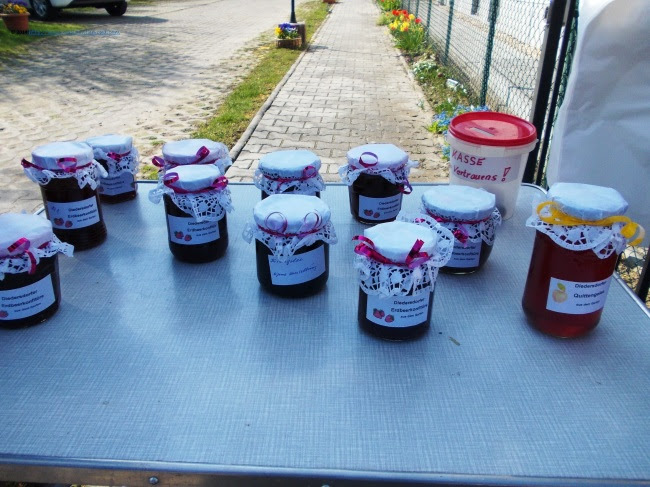 We are ready for more walking, going back to Blankenfelde by foot. From flowers to homemade marmalade, the locals are doing their best to convince the visitors to take some memories back home and support the local economy as well. The local small museum displays some information about local traditions, mostly connected to agricultural works. 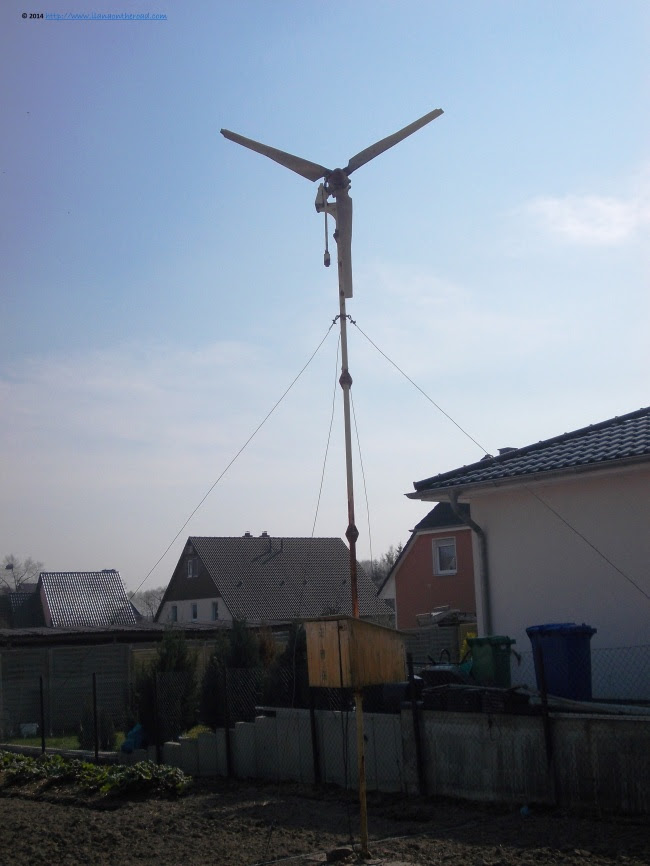 Far away from the Castle, the streets are quiet and only the fast bikes are breaking the monotony. 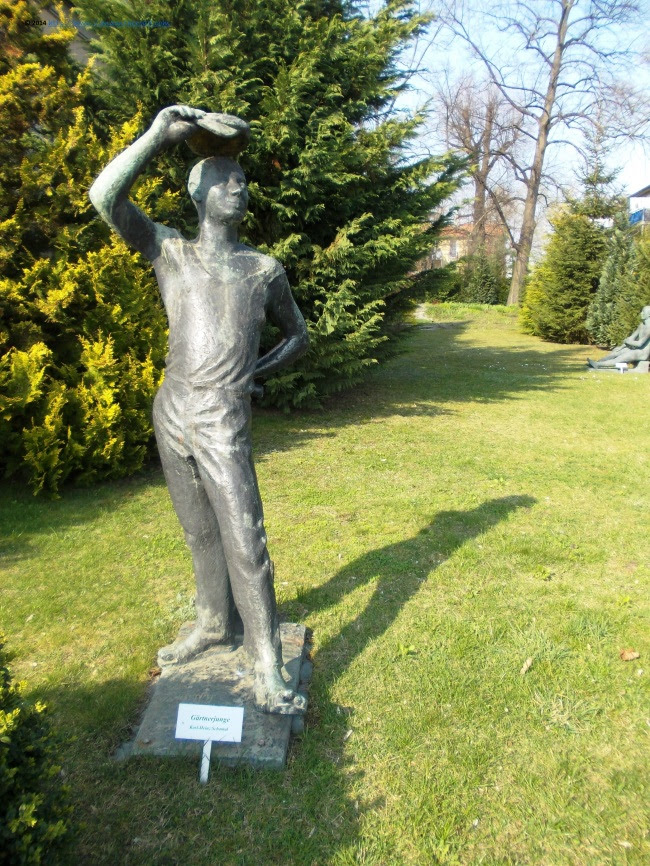 One hour after, we finally arrive in the borough of Blankenfelde, the least populated area of Berlin, according to the statistics. Created in 1375 as a settlement, it was integrated into the city during the big administrative reform in 1920, and till the fall of the Wall it play the role of guardian of the Western borders of the East Berlin. Nowadays, is just another quiet neighbourhood questioning its future. An invitation to a local debate about how culture can revive the area suggests that the local people wants and expect more for their corner of Berlin.
We don't have too many answers to such big questions now, but we think about coming back soon to check what's new at the castle and maybe spend more time in the area as well.
For more insights from Diedersdorf Castle, have a look at the dedicated Pinterest board: http://www.pinterest.com/ilanaontheroad/schloss-diedersdorfdiedersdorf-castle/
Here is a short video about agricultural works at the castle: https://www.youtube.com/watch?v=YH4629LN9so
Posted by Ilana WD at 11:41 PM