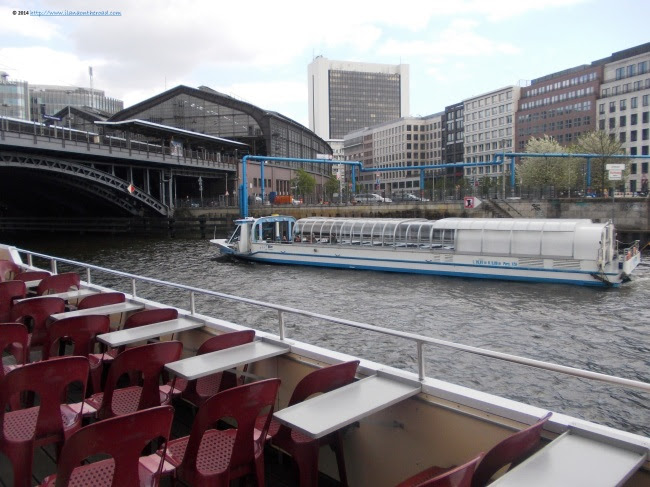 In 2014, I celebrated five years of life in Berlin. Such an event should be celebrated in a very special way, I said to myself months ago, trying to figure out what's the best present I can offer to myself (staying at the same place for such a long time deserves a present, I suppose). As a trip outside the city was out of the question, I tried to see what was left from the usual Berlin activities that I not checked yet. The result: a boat tour and a balloon journey over the city. As in the case of the second choice, I might need to overcome first my fear of highs, the first option sounded quite naturally. With a ticket for two bought via Groupon, I showed up at one of the meeting points across Spree, near Friedrichstrasse for (another) one hour of Berlin.
The boat was looking modest, with a bit worn-out plastic chairs and not too many passengers. Warm blankets were offered to the courageous ready to cope on the deck with the unpredictable April weather. Beers, coffees and cookies were also available to buy. 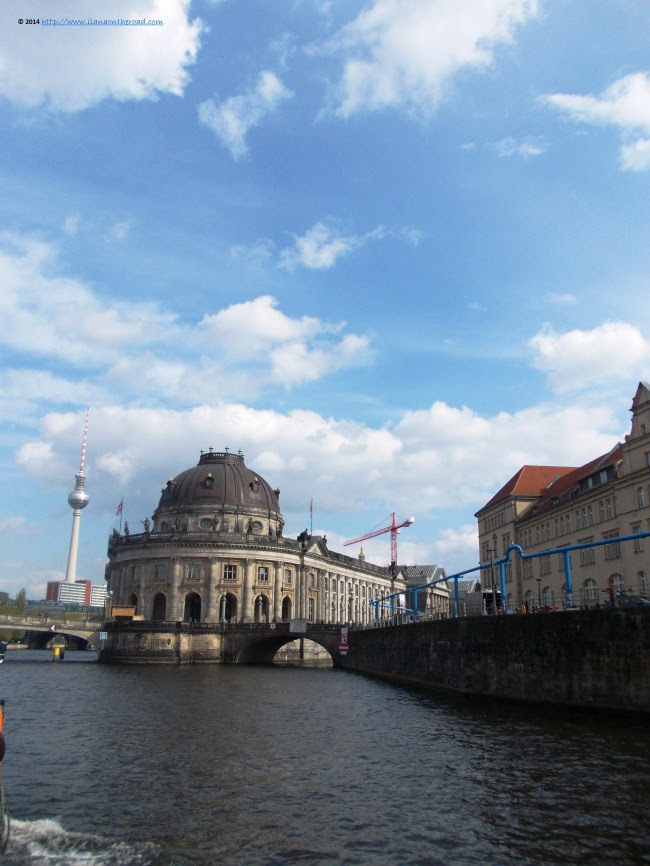 Spree is getting very busy that time of the year, with more and more boats - some very elegant, some water taxis - showing the city to the tourists. Our followed a relatively classic route: Friedrichstrasse-Museuminsel-Berliner Dom-Nikolaiviertel-Reichstag-Regierungsviertel-Central Station-Kanzleramt-Haus der Kulturen der Welt and Tiergarten. 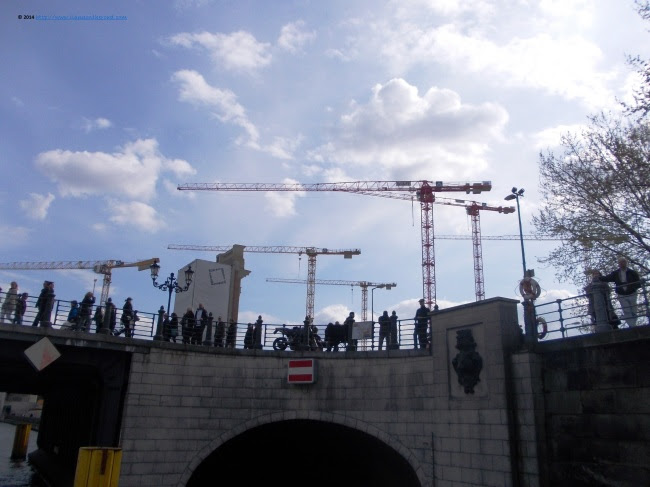 On the many bridges under which we pass slowly, other tourists or local people chilling out are taking photos, waving their hand to us or simply resting a bit doing nothing, thinking about nothing. In such a busy city, permanently reinventing itself, is not easy to rest properly, isn't it? 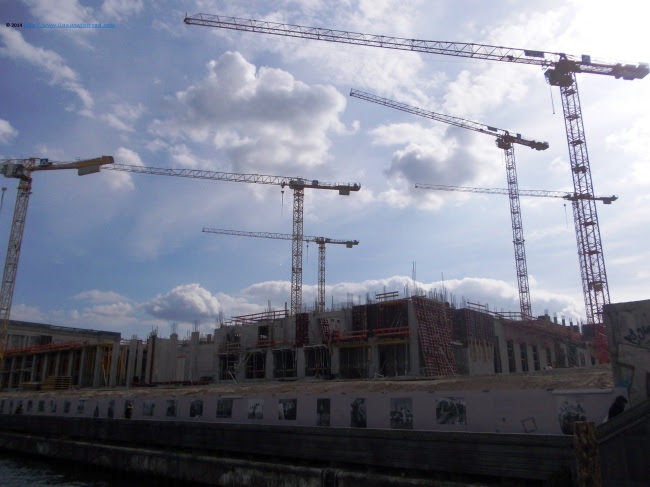 The guide explains us in Germany the history of the places we are seeing, with a lot of good information about the past and the near future. A new quarter to be inaugurated here, another area getting ready by the end of the next year there.. 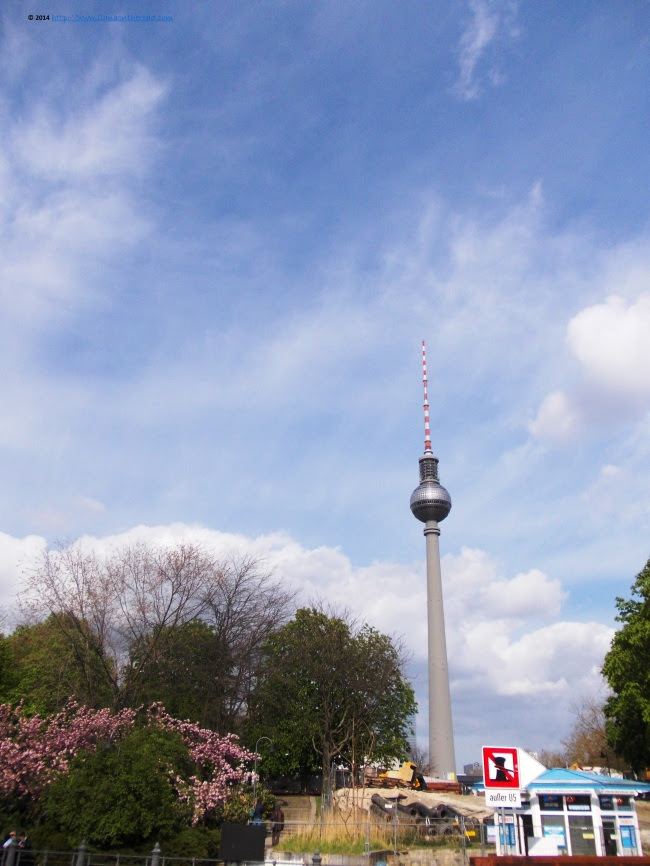 Although the more or less new symbols of the city remain unchanged and unchallenged, there is the spring beauty which makes everything looking better. Every time I make serious plans to leave the city, I remember the beauty of the flowers in spring and this memory only is enough to convince me to stay one more month. And the story goes on. 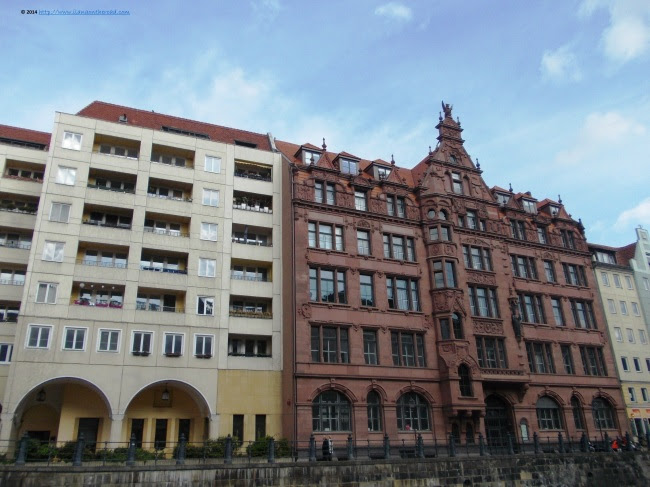 Time goes fast and we are already in Nikolaiviertel, an area which turned the historical traces into an original mixture of local borough culture. Familiar sights are soon popping up into our view: we are about to enter the governmental area - Regierungsviertel. The architecture is very inspiring not only for students in urban planning, but also for fashion reviews or urban catwalk shows. At the shadows of the huge buildings, fashion models are getting the last make-up touch before another photo session. 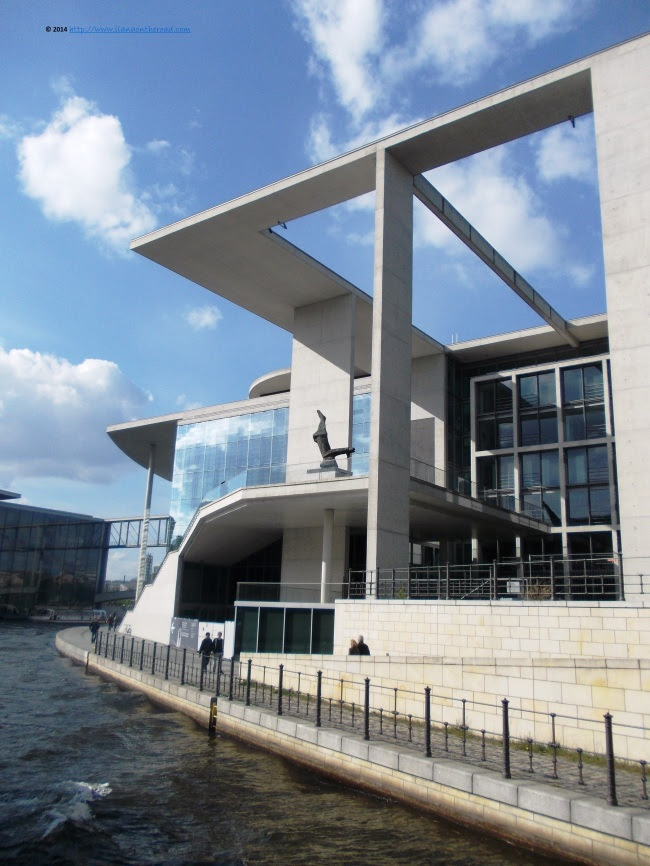 When the capital city moved from Bonn to Berlin, the city planners and politicians too had to cope with a lot of administrative and stylistic issues. The current formula took almost a decade to be accomplished, and there are many plans under work for further improvement. The results were quite spectacular and I most say that most of the new governmental buildings are looking better and much youngish than many of the traditional centers of power from the rest of Europe. 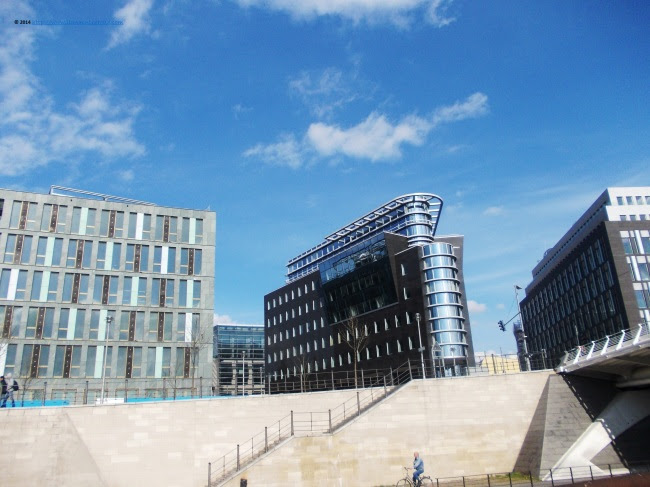 Near the Central Station, a new administrative and business area is scheduled to be finished till the beginning of the next year. Glass and steel is the new name of the architectural game here. 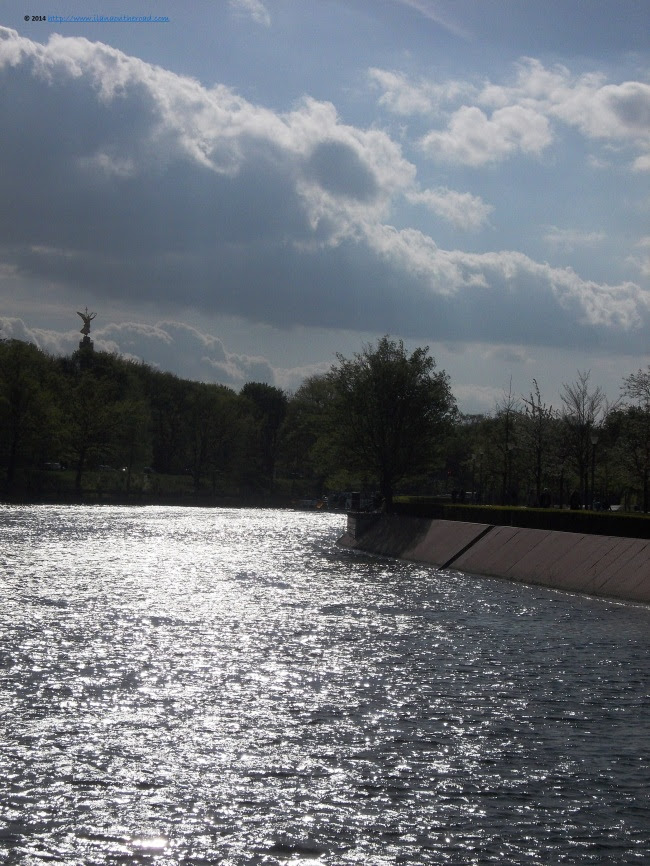 We follow a change of perspective once we enter the green lunge of Berlin: Tiergarden. 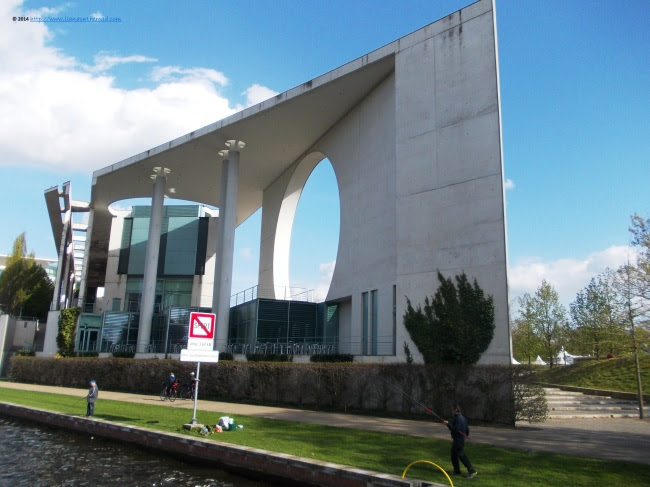 From a view to another, we are trying to figure out how the area used to look 25 years ago or even more. We agree that it's quite a good improvement and enjoy living in the present. After the war, most of the area here was used for planting vegetables, especially potatoes, most of the arrangements and constructions being done exclusively in the last two decades. 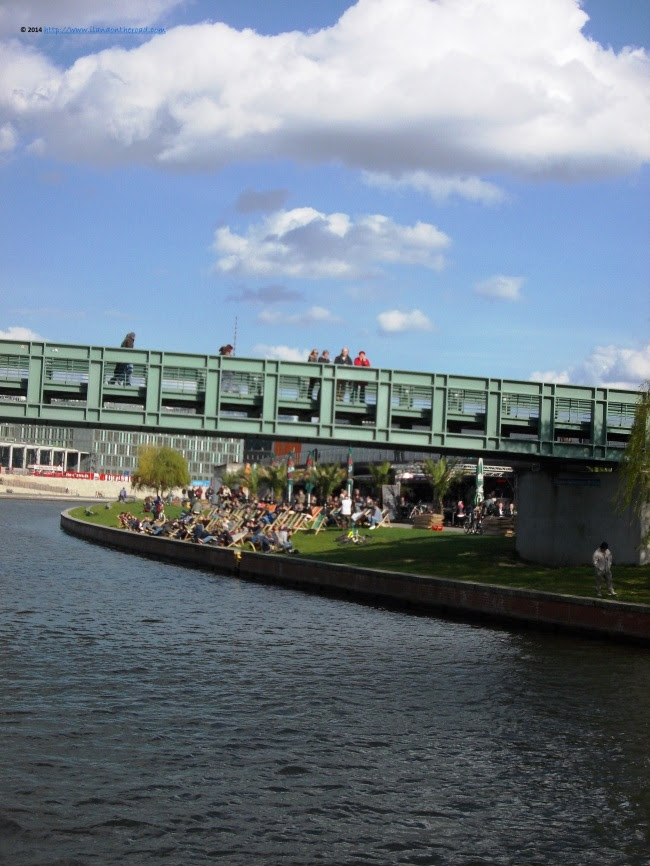 Deprived by sun most part of the year, Berlin developed an alternative 'beach culture': once the first rays of light are announced by the weather apps, people are going out near Spree particularly, to watch the boats, have a beer and spend us much time as possible outdoors. Some bars even brought in sand and colourful umbrellas. We will probably join them one of the next Sundays too, if sun kindly allows us to do it. 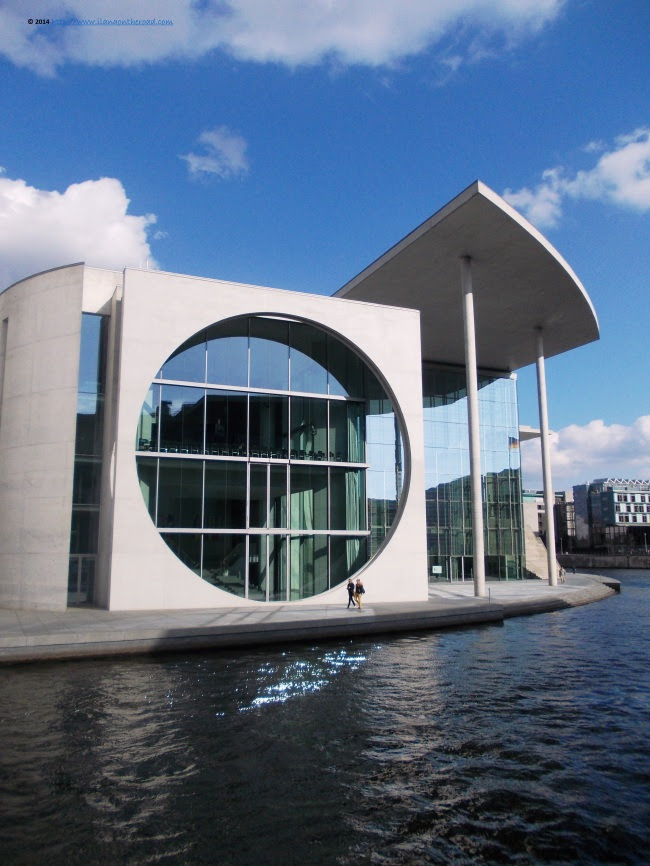 But before we elaborate our plans for the next Sundays, we are announced that the tour is ready. My first city boat tour was pleasant and maybe I will start a new tradition of water tours in other cities too. Sooner or later, I will probably get better used with the perspective of a cruise. Till then, Berlin is quite crazy to keep me busy for a little while.
Posted by Ilana WD at 11:39 PM