Bordered by the neighbourhoods of Steglitz, Dahlem and Zehlendorf, and at the border to Brandenburg, via Teltow, Lichterfelde - with its later sections East, South and West - started to get its noble residential outlook from the 19th century. Aimed to answer the new social status needs of the emerging Berlin middle class, this former village turned into an outstanding area of villas, whose residents were predominantly working in the financial domain or were officers of the Prussian Army.
A favorite area of the American representatives during the Cold War, the oldest villas' area of Berlin hardly changed. With its elegant villas with generous gardens and well-dressed ladies slowly heading to their favorite coffee place, walking this area is like entering a different time and social dimension. It is an image of what probably Berlin used to be in its bourgeois glory.
In the last ten years, I've been many times here, mostly to visit friends, but last year, I took a couple of long walks in various areas of Lichterfelde, eager to discover the different sides and secrets of this place.

You can easily reach Lichterfelde by S-Bahn or regional train, from, for instance, Sudkreuz train station, or by the buses crossing Dahlem-Zehlendorf area. You are still in the AB area. As it is a predominantly green area, with many houses hidden under the generous vegetation of the green yards, my recommendation is to visit this place in early spring - cherry blossom gives even more colour to the neighbourhood - or during the summer. The elegant coffees with outdoors table invites you to order a coffee and a classical piece of cake, the perfect companion for a good book.

One of my favorite time of the week to discover this part of Berlin was always on Sundays, midday. Serious people are having the weekly family lunch and you can hardly spot anyone outdoors - not that during any other times of the week you might cross path with more than 2-3 people, eventually walking their dogs. 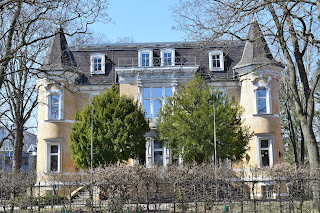 One of the most famous of the many beautiful residential places here is Villa Bernadotte, named after the famous WWII Swedish diplomat. A former research laboratory that was not hit during the Allies bombings during the war, it used to host a Jazz Club for the US soldiers while nowadays is a children and youth cultural center. 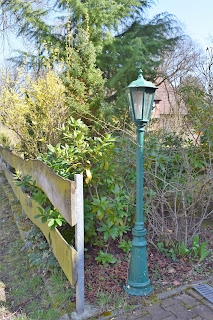 Walking the streets of Lichterfelde Ost always gave me the feeling of being somewhere out of the city. Quiet mews bordered by green bushes and discrete street lamposts are leading to modern residences with a small wooden bench in the front of the door. Jungfernsteig, for instance, was one of my favorite streets to walk on a peaceful Sunday, when only the heavy puffing engines of the vintage cars were troubling the overwhelming outdoor peace. 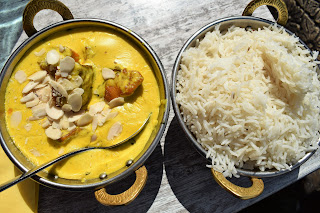 As eveywhere in Berlin, the range of restaurants covers almost every corner of the world. Once, we had a tasty stop at the welcoming Yogi Haus, serving simple Indian dishes. For the desserts, I've been more than once at Mia Gelateria, to get a spoon of icecream accompanied with some fresh warm waffles.
The area near the S-Bahn has a modest yet necessary selection of shopping, from big global retail brands to various German local brands and bio-stores. Kranoldplatz has a good offer in this respect, for instance. 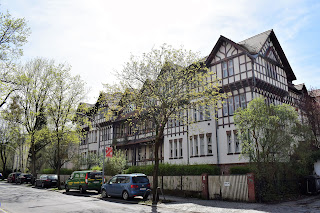 But you can hardly think about going shopping, when the good weather calls you to explore the streets bordering the old villas. From Lorenzostraße to Prallelstraße, there are enough jewels of classical architecture to keep your camera busy and your mind hungry for the story of all those people that used to and still living here.

Lichterfelde-Süd, situated around the area served by the S-Bahn with the same name, it is a completely different urban story. 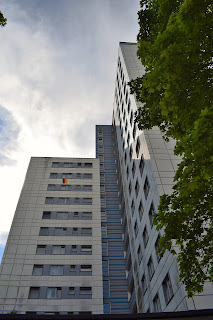 Similarly with the Gropius Stadt, here was built a urban colony aimed to answer the needs of the working class. Thermometersiedlung - as its parts are named after famous personalities with contributions in the field of temperature researches such as Celsius or Mercator - counts around 4,500 units in 10-floor blocks of flats organised in a compound which also includes a nursery, a church and various social institutions. 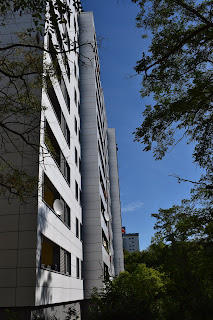 As in the case of Gropiusstadt, the unemployment in this area is relatively higher compared with the rest of the Lichterfelde, and so is the criminality level. However, as in many such compounds, ther eis a sense of neighbourhood and community that you cannot find somewhere else. Erva's Backshop is an example in this respect and so is the local coffee place where the residents of different ages can gather together once in a while. The neighbourhood intercultural garden project is aimed to answer the new intercultural challenges of Berlin in the last years. 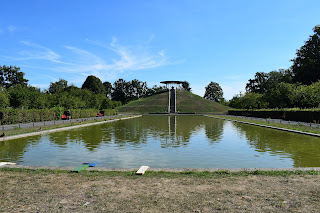 Another unknown fact about Lichterfelde is that Otto Lilienthal, the pioneer of world aviation whose memorial house I've visited in Anklam a couple of years ago, lived in the area but his house doesn't exist any more. On the Fliegberg, mirroring a big carp pond with lazy ducks swimming back and forth, actually a small hill in the middle of a park, he tested some of his flying projects. 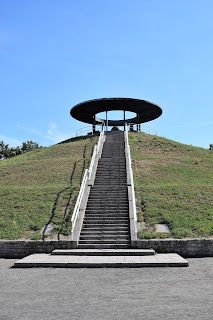 A massive monument in his memory was created with stairs integrated into the structure of the hill going on the top. 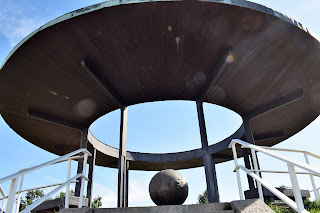 An UFO-like structure with a big hole in the middle leaves the sun to enter the top of the monument, where a world globe made of black stone was set. The overall taste is not top, but from afar, it looks at least spectacular. 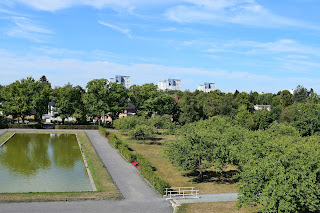 If not for the history, it is worth climbing to the top for the overview of the area, with its special industrial brutalist urban touch. Most of the buildings are relatively newly built, as the area has many abandoned places that were used by the US troops in Berlin as a training area, in the so-called Parks Range.

Another S-Bahn stop, another slice of Lichterfelde. Actually, my favorite part of it, for its charming houses and tasty temptations. 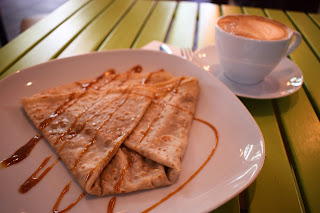 Actually, I've started my journey here with a sugary stop at the Coffreez, a small place where people speak French inside the S-Bahn station - considered a Kulturalbahnhof, a cultural train station - for some salted caramel pancakes and a cappuccino. The rhythm of music resonated with the colourful painting and the coming and going of busy residents asking in different languages for their favorite type of coffee and sometimes a homemade piece of cake too. 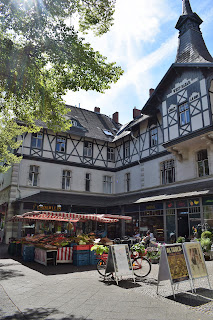 In the front of the station, the fruits and vegetables stall surrounded by half-timbered houses add a note of small fairytale German village. 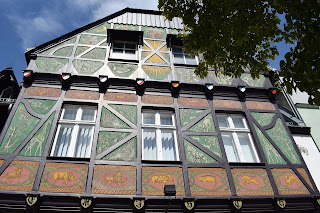 The style and decorations of the houses are one of a kind and are by far one of the most elaborated I've ever seen in Berlin. Compared to the massive opulent villas from Grunewald, for instance, in Lichterfelde West the houses are individualized by unique colours and shapes. 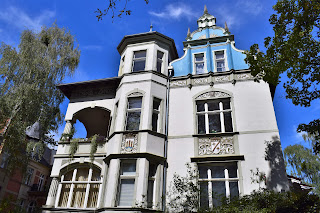 Walking around the area, step by step, reveals a lot of beautiful architectural creations that successfully passed the test of any time. 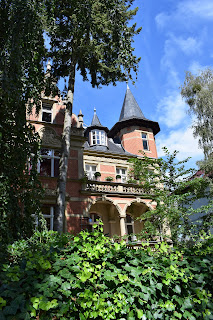 The most popular villas are to be found on Baselerstraße, Potsdamerstraße, Kadettenweg and Ringstraße. If you are curious to taste some of the local cuisine - mostly classical German and Italian with a big offer of French wines - you may want to take a break on Curtiusstraße, where the gastronomic offer of Lichterfelde West is displayed in full splendor. 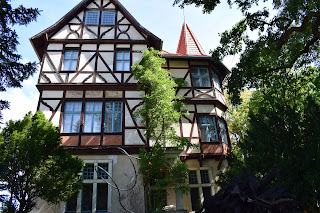 All of them were created in a style typical for the end of the 19th century and were aimed to offer elegant accommodation to rich families. Nowadays, even some of the inheritors of the old families are still living the same house of their ancestors, they split the space for allowing other people to come too, and eventually cover part of the big costs associated with the maintenance of such a real estate. 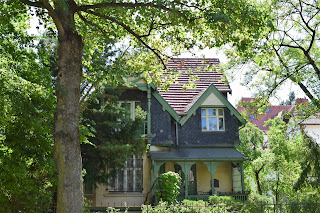 You can hardly find a villa similar to another, the styles covering a lot of geographical styles I've often encountered within the German-speaking realm. Wherever you turn your eyes, it looks like a never ending architectural beauty contest. Personally, I can hardly find one villa that I dislike. However, if you think about purchasing one, you need to save very hard, as the prices can elegantly reach the generous amount of 1,000,000 euro. Life is not fair, I know. 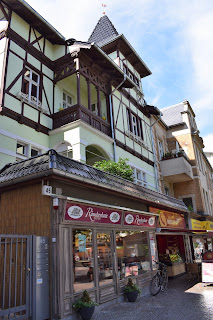 When my researches for the short guide of Lichterfelde ends and I know my time here is done, I have a little regret. After so many days spent exploring the streets and eyeing the villas, I was almost feeling as a local here. However, not local enough to afford living here. At least, I might want to come back again a couple of times, maybe for discovering some interesting restaurant and support the local shops.
Posted by Ilana WD at 2:11 PM