Exploring the Bauhaus Heritage of Siemensstadt

Created around the Siemens factory in the second half of the 19th century, Siemensstadt is at the first sight nothing else than a concentration of living units for busy working people. What could it be so exciting to see here, after all, besides rows after rows of blocks of apartments, more or less lookalike?
It's partly true: indeed, Siemensstadt means mostly industrial simple architecture, plane and without a specific aesthetic appeal. However, there is a certain community spirit that is usually missing from the big neighbourhoods, but also an architectural heritage that owns a lot to the Bauhaus movement - more about it in a dedicated next post. Camera in one hand and notebook in the other, at the end of the last week I explored this relatively unknown neighbourhood, that surprised me more than once. 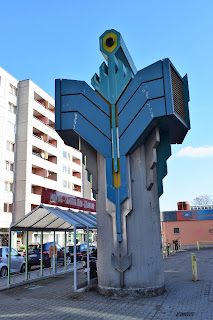 I started my journey at Rohrdamm station, on the U7 line, included on my list of Berlin's most beautiful metro stations. A couple of curiously-shaped constructions aimed to embelish the subway ventilation systems, reminding of native American prints, brings a splash of colour and an exotic note to the neighbourhood. 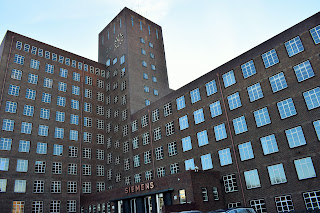 Siemensstadt was built in the Western part of Spandau, with its centers of power represented by the expanding Siemens factories. The red brownish-bricked buildings that still keep original constructions from two centuries ago are an example of industrial architecture, where simplicity and functionalism are used to send a message of prestige and clear power. 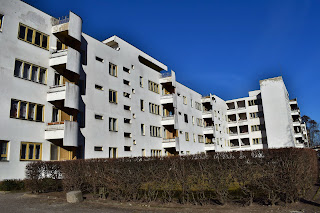 Since its founding, Siemens permanently employed an important part of the local population, and having them close to the factory, while offering modest yet decent living conditions was part of the social planning. The Bauhaus movement, created in Weimar by Martin Gropius in the 1920s, was offering the right construction solution for the expanding working class: the emphasis on functional design while considering the social aspects. 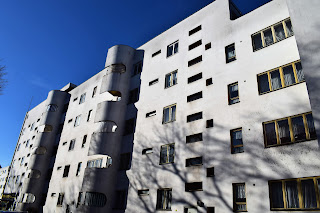 Gropius, together with Fred Forbat, Otto Bartning and Hans Scharoun, created at the end of the 1920s beginning of the third decade of the 20th century a so-called 'Siedlung' (translated as a 'housing development project') unique by its architectural diversity yet practical in its offer. Siemensstadt is one of the 4 such big projects in Berlin, together with Hufeisensiedlung in Britz, Weiße Stadt in Reinickendorf and Onkel-Tom Hütte in Zehlendorf. 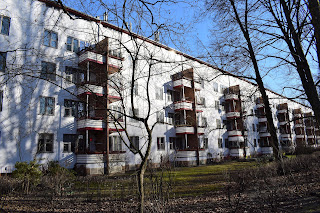 From outside, they look like small orderly boxes of matches. For each living unit, the learned architects - the representatives of the Bauhaus were knowledgeable not only in topics related to architecture, but Gropius encouraged the multi-disciplinary education such as knowing the physical properties of materials, painting and social sciences too - assigned around 54 sqm - 2 rooms - for a family of 4 persons. 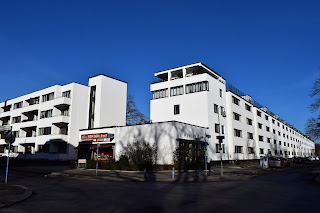 The new living units were adapted to the challenges brought by the industrial revolution, offering to the Siemens workers access to various facilities, such as a laundry point - Wäscherei - at the end of one of the buildings. In addition, cultural and religious services, as well as childcare were part of the bigger offer of services included in the complex of buildings. 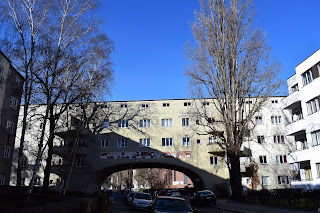 Nowadays, once you enter a specific area, you may find many announcements not only about available apartments to rent, but also about common activities, such as local historical and photography tours or just neighbourhood meetings. 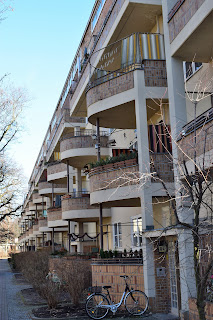 If you are looking for some interesting examples of Bauhaus constructions, the best streets to explore are: Jungfernheideweg, Goebelplatz and Nonnendammallee. 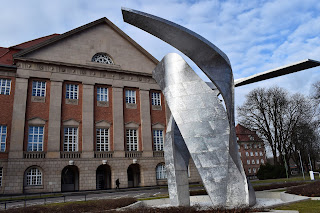 My next stop is one U7 subway station away: Siemensdamm, where there are more Siemens administrative buildings and factories. In the front of the main building, a massive sculpture, signed by the architect of the Jewish Museum in Berlin, Daniel Libeskind, reverses the urban dynamic of the area: The Wings. 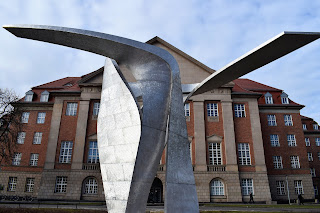 Given its non-central location, you hardly know about it. Initially presented at the Milan Expo 2015, it is a 3-part wing-shaped aluminium structure which comes together twice as the sculpture twists upward. 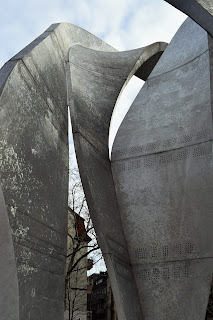 It has a high of 18.47 meters, which amounts to the year when Siemens factory was created. 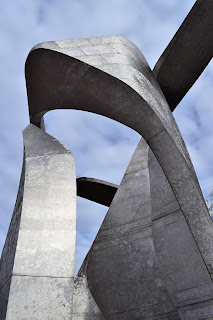 The fierce struggle of the wings that seems to fight against the forces of gravitation and levitate up into the skies enters a different dynamic stage with the 5,000 small LEDS enlightening the monumental work. I've visited the place during the day, therefore I couldn't spot fully the digital activities. 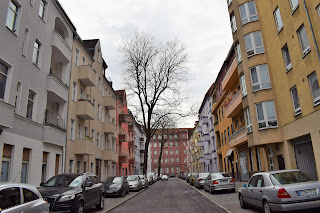 There are no 'wows' to utter at every corner and Instagrammable places in Siemensstadt. The over 10,000 people living here are busy at work, many of them for generations employed by Siemens. Even my expat friends working for the German giant preferred to move here, as the long working hours do not allow too much time to cross the city to a more fancier and glamorous neighbourhood. The rents are more than bearable and the life is safe, cheap and uneventful. The easy transport connections via the Ring and fast subway connection that initially pledged for locating the factory here are still among the main advantages of living and working here.
But there is a local life which you can hardly find in the other posh areas: at the local bookstore Bücher an Nonnendamm, there is hardly place left on the main door window for the announcements of weekend common activities. More than in any other parts of Berlin, there is a high concentration of Italian restaurants, at competition with typical German kneippe, and bakeries, among which the Backusilius, a small baking workshop, also family-friendly.
You can easily live in Siemensstadt, in Bauhaus boxes of matches, included in the UNESCO World Heritage. Your history and the history of the place are growing up as a small sequence of the history of this city.