The Bauhaus Dutch Architecture from the English Quarter

After I've discovered this week Onkel Toms Hütte in Zehlendorf, the urban project of Bruno Taut, I was curious to see, photograph and understand another project of him, in the other side of the city: Schillerpark in Wedding.
Included since 2008 in the UNESCO World Heritage, it was considered one of the biggest city project of the Weimar Republic, aimed to offer proper accommodation to workers, functionaries and middle-class civil servants. 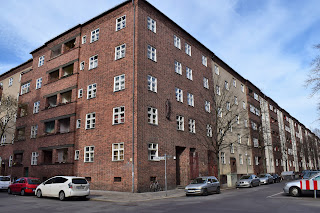 I started the journey at U6 Rehberge train station. Followed Müllerstraße and the blue direction shields leading to the Schillerstraße Siedlung (housing development project). The streets around are bearing English-sounding names, although not all of them necessarily belonging politically to the UK: Dubliner-, Glasgower-, Liverpool-, Oxford-, Bristolstraße. Hence the area was also called: English Quarter. 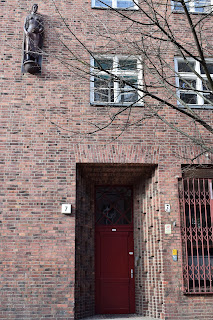 However, the style rather reminds of the Dutch architecture, with an exclusive focus on red bricks. Some entrances, that I've also seen in some areas in Moabit, look like tunnel entrances, in a 3D creative display of small bricks that give depth to the entrance.
Although the style is predominantly Bauhaus, decorative elements pertaining to the Jugendstil are frequent, which confers to some buildings a specific personality and unique style. The red bricks are used not only for the blocks of apartments, but also for other buildings included in the area, including the local 1-story church. 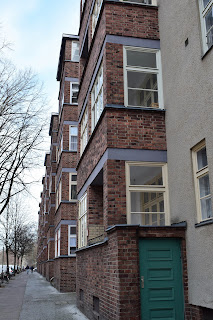 The materials are cheap, plaster and bricks, displayed on the 2-4 storeys buildings. According to the plans, each apartments was assigned 40 sqm., apparently enough for the needs of the bottom middle class. The area was also called 'red' for a reason other than the colour of the buildings: here there were living many opposants to the Nazi regime, most of them communists. 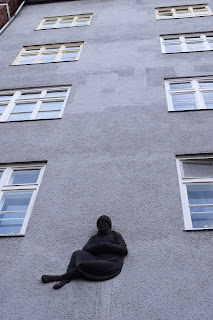 After the war, the project was further extended, and the different style - predominantly plaster as the construction materials at the end of 1950s, when the works were done, were relatively hard to find - is distinguishable. 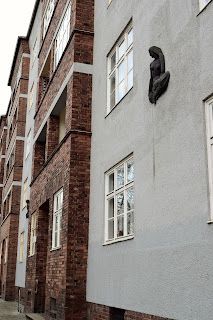 The architecture is mostly monotonous, the kind of outlook specific to high concentration of people, but it breathes a certain sence of quietness and comfort. I rarely see children on the street or bikes, and the place seems like almost lost in time. 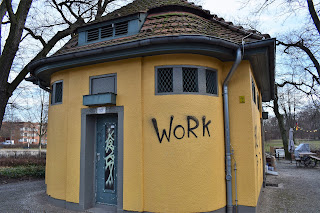 Given the UNESCO World Heritage status, Schillerpark Siedlung theoretically has a dedicated information point. Hosted in a curvaceous shaped public convenience - simply put, public restroom - one of the few designed in 1915 by the architect Heinrich Schweizer still preserved, it is out of service as for the time of my visit. Disappointing, especially given the 100 Years Bauhaus celebrated this year. 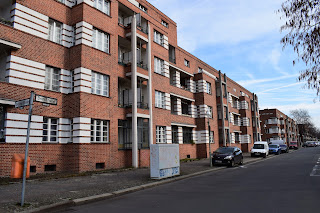 On the other end of the park, the cubic geometry is amplified by the diversion between red bricks and the outdoors axis of the balconies. The buildings define a square, with a big green space in their middle. No shops or commercial points, as you need to go to the main street for some purchases. 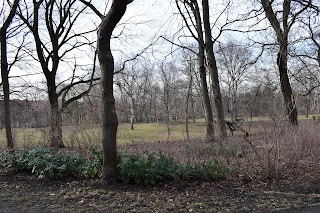 In the middle of all the orderly buildings, there is Schillerpark - or Chillpark, as it is nicknamed. A small forest, with hills and heaps, from where you can fill your lungs with fresh healthy air. If not the airplanes landing to Tegel every couple of minutes, I would have mention the majestic quietness too, but there is in fact any. There are no playgrounds, but children can easily and freely create their own games in the green areas.
Meanwhile, there is enough space to do your morning jogging, walk your dog or when the weather allows to spend some quality time outdoors in the company of a good book. 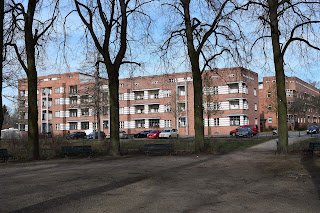 Although my visit in the Englisch Quarter was relatively short, and besides the park and the red-bricked houses there were not too many attractions to discover, I am happy I had the chance to see a completely different Bauhaus project. Plus, I've been for the first time in an area where you rarely - if ever - go unless you live or know someone who's living there.
Posted by Ilana WD at 8:46 AM