A Walk Through Hansaviertel

Hansaviertel is considered Berlin's smallest district, caught between the River Spree and the Tiergarten. Dramatically damaged after the WWII bombings, it was slowly redesigned and reshaped at the end of the 1950s, beginning of the 60s, thanks to the active involvement of architects belonging to the Bauhaus movement, such as Alvar Aalto, Egor Ereimann, Walter Gropius or Oscar Niemeyer.
The name - Hansaviertel - was as its main streets are named after the big independent trade cities in Northern Europe, a network created from the beginning of the 12th century, such as Hamburg, Anklam, Greifswald or Lüneburg. 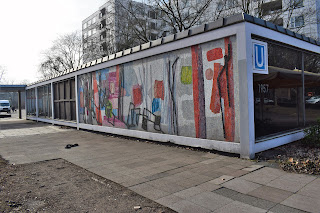 I started my walk from the U9 Hansaviertel train station, that was open only in 1961 - when the reconstruction of the area was almost finished. From outside, it is shaped as a rectangular long box, looking like painted in a haste during some creative hobby art workshop. 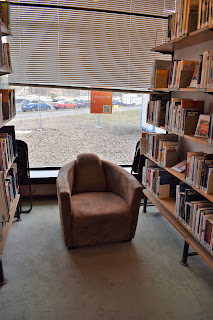 Opposite, there is the Hansabibliothek, one of the first open access libraries in Berlin. It is also rectangularly shaped, and has an interior garden - closed as for now for reconstruction works - where during the summer the visitors can read outside. 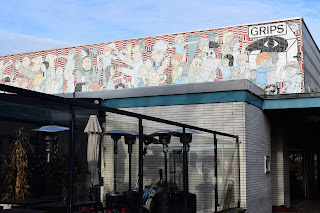 On the other side of the road, on Altonaerstr., GRIPS Theater displays another playful visual outlook. The choice of the graphic representation is not random, as it is a theatre mostly focused on a young and adolescent audience. Most of the plays are exploring the ways in which the public shall be directly involved in the creation of art. Sounds like a place I should come back soon for understanding better this aesthetic perspective. 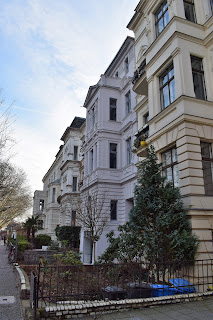 For the next minutes am mostly surrounded by anonymous over 10-storey high blocks of apartments, until I arriving on Flensburgerstr., with its freshly painted classical building, hosting at their ground level small art galleries or children-friendly caffés. 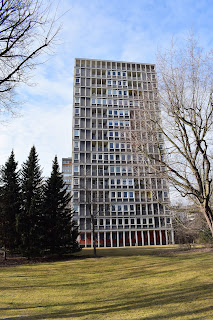 But wandering through this small island of classical old flair doesn't last longer, as I am again kept company by Tetris-like structures, made of relatively affordable materials, aimed at hosting as many families as possible in comfortable yet space-limited apartments. 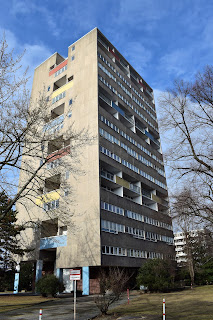 The splashes of colours create a little diversity in a mass of grey buildings. After the war, West Germany needed to offer affordable accommodation to its middle class, and such real estate projects were the solution. Similarly, in the extreme West side of the city, Gropiusstadt was a offering a much larger alternative, aimed especially at the working class and low-income families. 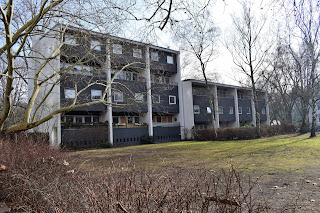 Happily, there are also couple of human-scale - 2-storey small constructions, that remind me of some part of Siemensstadt that I recently explored. 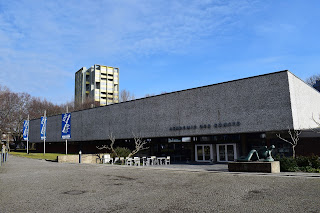 The brutalist - read ugly - style of the Akademie der Künste might be discouraging a visit, but the concerts and literary events held there - especially on the occasion of the Literature Festival - are high class. I've been here a couple of years ago at a concert by the very talented Sanda Weigl and was impressed by the high technical quality of the sound. 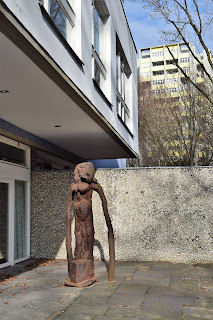 Works of art are spread around the building, adding a creative note to the sober, unfriendly outlook. 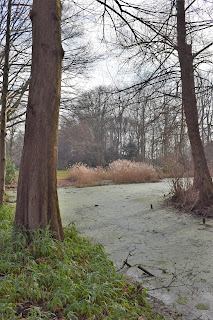 When feeling overwhelmed by so many constructions and grey colours, a walk to the small park nearby saves the day, especially when you are too lazy to walk as far as Tiergarten. 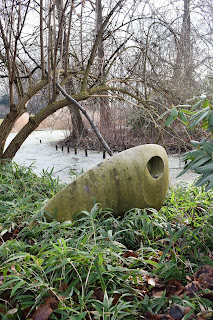 Walking the empty alleys give a peaceful, almost poetic feeling. 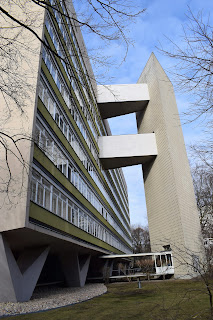 After a short but welcomed meditative break, I am back in the concrete jungle, trying - unsuccessfully to understand the meaning - technical mostly - of the right side concrete giant tetraeder. Cannot be an elevator or an emergency exit and if it was supposed to be an aesthetical adornment, it went completely wrong. Made a not to self to try to go inside the building one day. 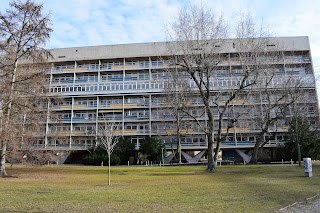 The enormous green spaces surrounding the buildings are well planned, therefore when the concrete is too mentally overwhelming, you have the blue sky to spend your summer days. I can only imagine how everything looks beautified when the trees are getting back their green leaves. 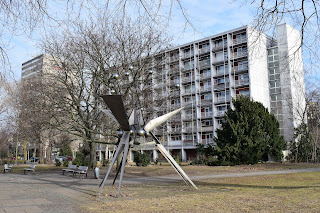 With its welcoming monotony, Hansaviertel taught me some interesting lessons about urban living and Bauhaus architecture and although without the mesmerizing effect the view of beauty instantly produces, it shares the feeling of a silent wisdom and sometimes it might be just enough.
As I am exploring more and more aspects of the Bauhaus movement, I can't wait to see what intellectual discoveries the next discovery will bring to me.
Posted by Ilana WD at 5:57 AM