Discovering the Bauhaus Heritage in Zehlendorf

Out of the Onkel Toms Hütte metro station, I am welcomed by rows of colours houses, in some of my favorite colours. Although I've been more than once in this area, on the U3 metro line, direction Krümme Lanke, in Zehlendorf, I've rarely paid attention to the architecture. Which is a pitty, as this part of Berlin shares an unique Bauhaus architectural style.
After an intensive tour of Siemensstadt last week exploring this heritage, celebrating its 100 years since its foundation in 2019, I am here to discover a different side of Bauhaus displayed by this off-the-radar Berlin destination. 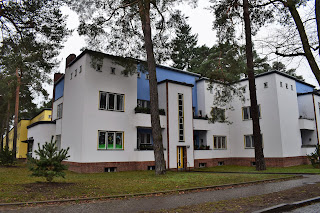 Neighbouring the stylish Lichterfelde and Grunewald, Zehlendorf is the middle-class buffer area. The Siedlung (translated as a housing development project) Onkel Toms Hütte (in English, Uncle Tom's Cabin, inspired by the book with the same name by the American author Harriet Beecher Stowe, that was given to a restaurant in the area opened at the end of the 19th century) was created in the second half of the 1920s. The local entrepreneur Adolf Sommerfeld bought a piece of land here and wanted to create housing facilities here. Meanwhile, the metro station was inaugurated in 1929 and the project coordinated by the Bauhaus architect Bruno Taut was finished soon after.
Labelled as 'bolschevik', Taut - who also designed the Britz Siedlung, as well as the Schillerpark construction project in Wedding, Berlin - left Germany first for Japan and then for Turkey, where his skills and knowledge were requested to contribute to the urban modernisation of the country, following the reforms of Atatürk.
The main contributor to the project, Adolf - later Andrew - Sommerfeld, who also developed several projects in Klein Machnow, besides supporting the expansion of the metro lines in the Zehlendorf area, among others, was also forced to leave Germany during the National-Socialist regime, because Jewish. After wandering to France, Israel, England and Switzerland, he returned in Germany in the 1950s, when this part of Berlin was under American administration. 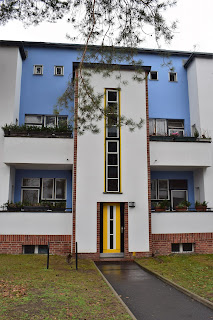 What distinguishes this Bauhaus project from other similar urban interventions - such as the White City in Alt Reinickendorf - is the diversity of colours used both for the facades as for the doors.
2-3- story buildings in vivid blue, yellow, bordeaux and brown splashed between big layers of white paint are unique among all the other creations of the Bauhaus school. Therefore, the urban project was often nicknames also Papageisiedlung, where Papagai stands for parrot.
For each blocks of buildings, Taut developed different models of doors, which matching a variety of choices of colours. 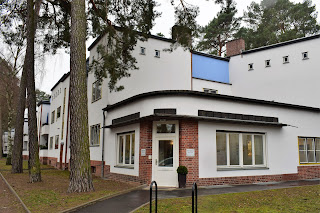 You will hardly find all around the area any shops or merchant points, as all the commercial activites are concentrated in the immediate vicinity of the metro station. Once in a while, in the corner, one can see a hair salon or maybe a yoga studio, but anything else. 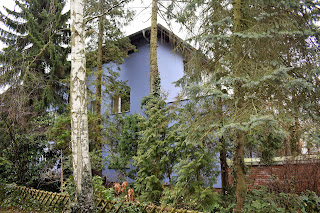 Zehlendorf is one of the areas with a high concentration of nature and gardens. Although there are not too many playgrounds, many houses have enough space for building up their own small park for the little ones. However, for a long nature walk, the alleys are generously bordered by trees and the parks are real slices of forest, with big lakes and bushes where you can easily forget that you are still in the city.
The choice of small buildings, horizontally expanded, compared to the usual intense vertical concentration imitating sky scrapers, but in a more 'proletarian' variant in Gropiusstadt, suits very much the environment, to which it collaborates instead of expanding at its expense. 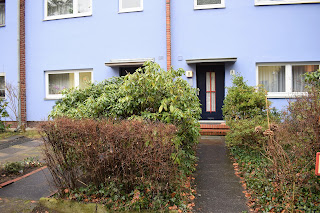 The colours bring diversity to a very calculated urban monotony. The 2,000 units included in the Siedlung are offered a different outdoor vibe although the plans show a similar structure of the internal design planning. 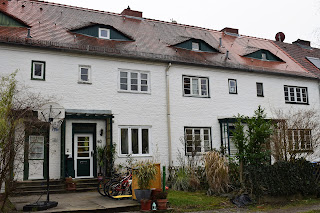 Without fences surrounding the entrances, the houses are safely opened to the outside streets, winning a little bit more of green space but also displaying a relatively risk-free attitude. Why to be afraid of the neighbours and hide yourself behind a fence? 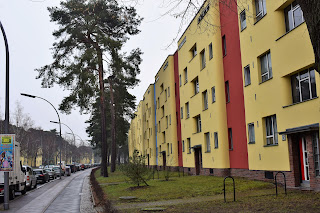 My path leads me from the main road of the Argentinische Allee, to the more quiet areas of Im Gestell or Waldhüttepfad. 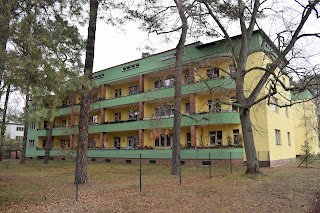 In the Kiez - Neighbourhood - is just another quiet Thursday morning, with rare passersby walking their dogs, but not too much local vibe. On the other side of the metro entrance, like every time this day of the week, there is a relatively small food market that just opened, mostly with food trucks. 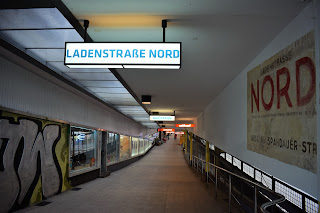 Before heading back, I make a small tour of the main shopping avenue. Initially, when Sommerfeld bought the piece of land that will soon become the Siedlung, he wanted to build a many-story shopping center. Given the financial and technical limitations, the project was brought to the ground, with a circular structure where various shops, bakeries and small restaurants are hosted. Practically, on your way back from work to home, you can stop here to buy whatever you need and want, and eventually have a coffee - vegan and bio variants are also included. On the Ladenstraße (shopping avenue) it is concentrated the social life of the Siedlung and although everything is indoors, there are a couple of enjoyable places, including a very small bookstore, provided with the last editions of top notch local and international books.
Although it kept raining all the time, the colorful buildings changed the grey mood, as did the excitement of getting to know some new episode of the Berlin history and architecture. With more Bauhaus discovery planned this year, it looks like I will have a lot of such happy moments in the coming weeks and months.