As someone who loves flowers as much as I do - did you check my Pinterest dedicated board already? if not, you definitely have to -, always keen to check the latest Garden Shows in Germany - like I did in Prenzlau a couple of years ago, and in Berlin, at the IGA, the last year - visiting the  Garden show in Burg bei Magdeburg made a lot of sense.
In fact, besides the flowers, I wanted to add a new destination to my list of places to visit in Germany, plus to have my first impression of the so-called Jerichow Land region, with many outdoors and historical sightseeings worth to include into any guide of this part of the country. 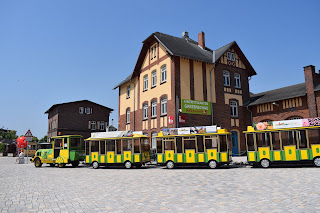 Burg bei Magdeburg is only one hour away by train from Berlin, and Regio 120 Tickets are recommended for one day trip. The Tourist Office from where you can buy tickets for the garden is part of the train station and from the same place the city-tour by mini-train starts and ends. 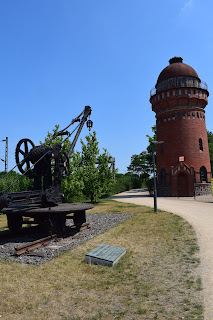 As many places in Germany such as Wittenberge, the development of the rail network contributed significantly to bring this city on the map of the country, and technical memories from the mid-19th century are part of the local history and proudly displayed near the train station. 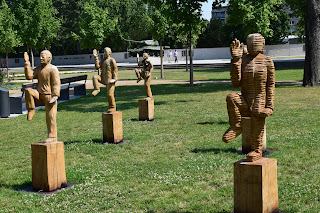 I am an honest travel blogger and I will openly confess that this Garden Show didn't impress me at all. The arrangements were just as you can find in any usual park in a modest Berlin neighbourhood and the exhibitional space was relatively small.

There are interesting art installations with a historical background which reminds of the old times of the DDR, creating an interesting visual mixture. I personally was not very pleased to notice that once in a while, in some corners, behind the bushes and flowers there were actually tomb stones. Relaxing, having a family picnic and playing surrounded by grave stones doesn't look like a great way to spend your free time. At least not for me. 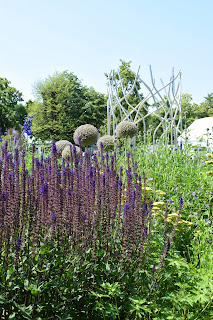 However, if you chose careful your corners and perspectives, you can in the end find some middle way for a great family day out. The clean manicured alleys bordered by wild summer flowers and the creative setting of the playgound are calling for adventure. 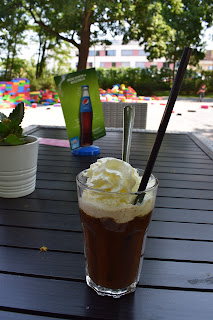 Near the restaurant with a long menu list, the little ones can play carefree with some huge pieces of LEGO, building their imaginary worlds. 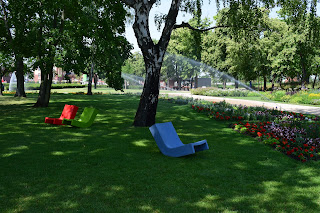 The comfy modern chaise-longues are an invitation for spending a whole day reading alone or with some significant other. 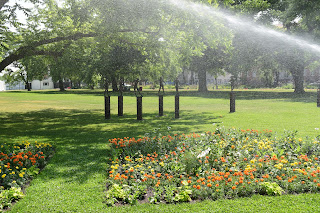 Especially if you need some garden feeling in the summer, this place has the right - although modest - ambiance in this respect. 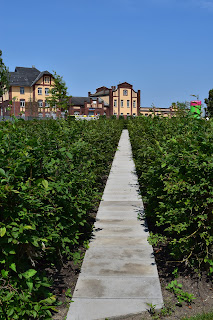 As usual, not only in the case of travel, perspective is everything and one of the many things travel teaches us is to get the best of any opportunity. 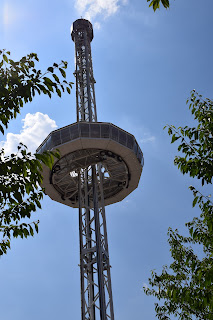 Once out of the park, we are heading to another top local destination, a landmark since 2013: the 81-m high city tower which at the end of exactly 7 minutes of ascent and descent - for a ticket price of 7 EUR - it shows you the best of Burg bei Magdeburg from the very top. It looks like the Space Needle and it is a really great experience, especially if you love high sensations and space ships ways of transportation. 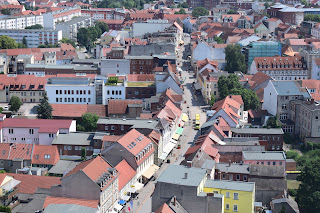 The cabin is slowly rotating around its axis during the taking off, offering you a complete perspective over the city without even moving from your seat. The cabin also has air condition, which is a real blessing during the hot summer days. 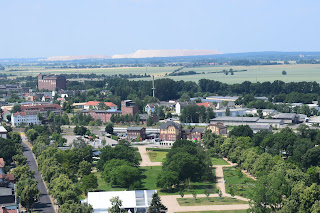 From up, the Garden Show looks really neat, but what is most important, I was given a fantastic view of the Jerichower Land and its natural attractions. 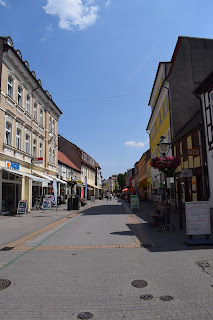 Back on the ground, we are decided to find even more interesting places in Burg bei Magdeburg. The central area with its walking area, small shops and restaurants is a good way to start. 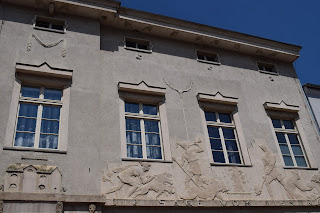 Schartauerstraße has a lot of interesting buildings with their own histories that are waiting to be told if it happens to get the right tour guide. 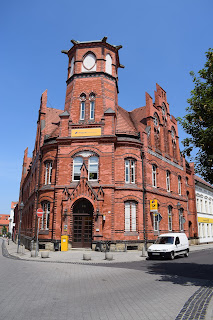 Official buildings, such as the post office, are made to impress, with their serious red-bricked walls and square roofs. 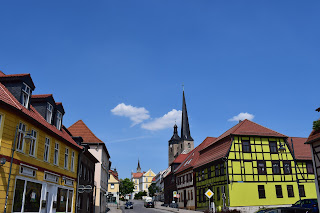 The timbered houses were given a recent touch of colour, adding to this part of the city a feeling of walking in a world of fairy tales. 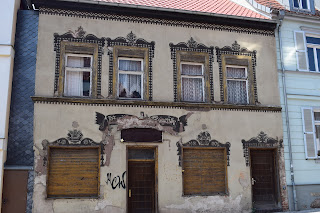 Even the buildings not repainted yet do have a mysterious air which may easily place them in a novels with a Gothic touch. 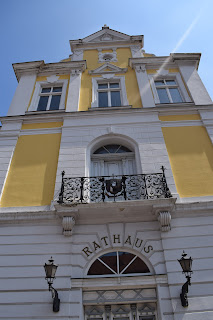 The city hall building looks like a castle of a modern, revolutionary princess. The details of the balcony and the discrete architecture makes this institutional building an elegant presence in the old city area. 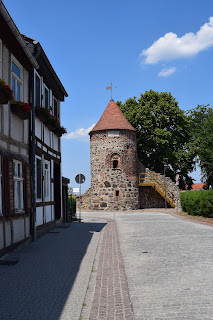 Burg means citadel in German, and Burg bei Magdeburg has a lot of towers spread nowadays among the many part of the extended city area. For instance, the so-called Witches Tower - Hexenturm - that during the witch-hunt period of time served as women prison in the 17th century, especially for those women accused of witchcraft. The tower was part of a complex fortifications system set up in the 11th century, which shows nowadays how much the city expanded in the last centuries. 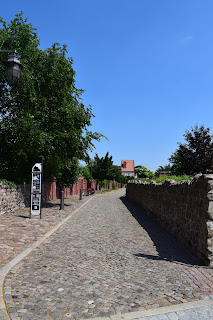 The old city maintains a certain Romantic air, with the cobblestone streets surrounding remains of the old fortifications. A small part of the history of Europe is unfolding under our feet. 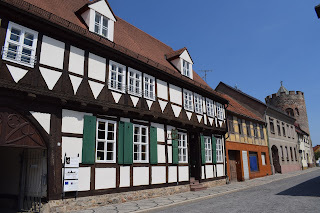 On streets watched by old towers, the small houses are bordering the narrow streets, in a full display of colours and history. Even the public library bearing the name Brigitte Reiman, a writer born here who dared to display in her unfinished novel the disfunctional realities from communist Germany, is hosted in a historical building. 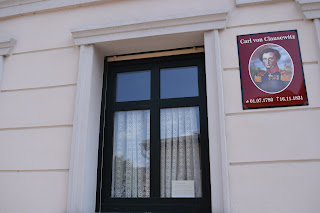 Another local personality is the worldwide famous military theoretician Claus von Clausewitz, whose house of birth is a local museum. 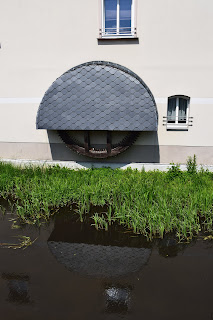 The old city area is the most pleasant part of Burg, with its small side alleys and historical buidings and I am glad I had some time to explore more of this unknown German town. Slowly walking this charming alleys allows you to discover the different architecture styles and watch the people living here. The mood is relaxing and no one hurries up, not even the cars. 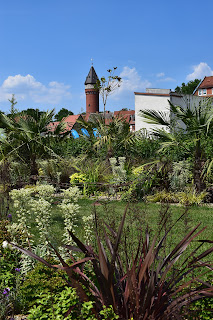 Part of the Garden Show, other local gardens are also creating unique outdoors settings. Ihlegärten, for instance, with the old tannery nearby is a special natural corner in the urban landscape, and looked for me much more interesting that the park near the train station. 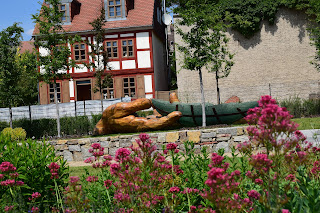 As in the case of the big park near the central station, the outdoors artwork creates special visual effects. 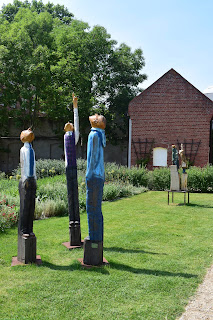 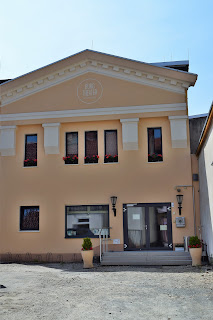 There is something else historical about Burg bei Magdeburg too: it hosts the oldest movie theatre in Germany. Hosted in the same building since 1911, here you can watch modern film production in a historical ambiance.

It is about time to say 'good bye' to Burg bei Magdeburg, not before paying the last homages to the protective Roland, a constant presence in many German cities up North of the country, such as Stendal. Our trip here had only one main travel objective, but I am glad that I used my time to discover so many other interesting places. Magic travel opportunities well spent!
Posted by Ilana WD at 10:12 PM

Email ThisBlogThis!Share to TwitterShare to FacebookShare to Pinterest
Labels: 100 places to see in germany, burg bei magdeburg, germany travel tips, landesgardenschau 2018, one day trip from berlin, what to do burg bei magdeburg